The Lusitania and the ways of modern war: Book review 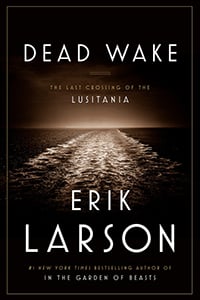 DEAD WAKE: THE LAST CROSSING OF THE LUSITANIA

Now that the flood of Great War centenary books has abated, writers will be turning their attention to the 100th anniversary of key moments in the war. In Canada, that means the first of the Vimy Ridge books should start showing up late next year. In the U.S., it was bound to produce at least one volume on the sinking of the Lusitania, a giant step in America’s hesitant entry into the war, and hence a key moment in the dawn of the American Century. It’s a well-known story. On May 7, 1915, a German U-Boat sank the British liner off the coast of Ireland: 761 passengers and crew survived, while 1,198 died, including 123 Americans.

But Larson turns this familiar tale into a finely written elegy on the contingency of war. Just about everything that could go wrong for the liner, did. If its captain had been able to use all the boilers, the ship would have missed its encounter with U-20; if the fog had lasted only a half-hour longer, the two ships would have passed each other unawares; if, if, if… The most moving passages are devoted to the photographs taken to identify the dead—a smiling man in a polka-dot bowtie, a mother and child in a single coffin, a toddler on a makeshift platform. So many of the dead were children—only six of the 33 infants on board survived—that they haunted the American consul. Weeks afterwards, he entered a room in his home and unexpectedly saw his young daughter, slumped in sleep: “I recoiled as if I had found a serpent.”

A week before the Lusitania left New York on its final voyage, the German embassy in Washington issued a warning that all British ships “are liable to destruction.” A few cautious souls, including the famous Shakespearian actress Ellen Terry, cancelled their berths. But most went on board, unwilling or even unable to believe that a “civilized” nation would really sink an unarmed passenger liner. That is the Lusitania’s true symbolic import, as an iconic moment in the growing barbarity of total war in the 20th century. Less than 30 years later, every nation even tangentially involved with the ship would drop tons of bombs on civilian populations as a matter of course, the outrage over the Lusitania a receding blip in the rear-view mirror.

FILED UNDER: The Great War The Lusitania Vimy Ridge