Novak Djokovic: the man to beat

Does Djokovic's rise to the top of the ranking spell the end of the Nadal-Federer era?

A little less than a year ago, Novak Djokovic, then the No. 3 tennis player in the world, found himself labouring in the sweltering late summer heat at the U.S. Open in New York. Flushed in the face and lead-footed, he was on the brink of being eliminated by fellow Serbian Viktor Troicki, who was ranked 47th. Fans were no doubt wondering if Djokovic would simply pull the plug on the match, as he had done before at big tournaments when his body seemed to fail him. Even the announcers had settled into a familiar patter about Djokovic’s lack of fitness and mental toughness in a sport dominated by two of the best players the world has ever seen: Roger Federer and Rafael Nadal.

But Djokovic did something few expected: he battled back. “He ended up coming back and winning it,” says Bobby Mahal, a former national-level player for Canada and the current coach of the Indian national team. “Then he beat Federer in the semifinal. Although he lost to Nadal in the final, to me that was where everything, mentally, kind of changed for him.”

After several years of uneven performances, the 24-year-old Djokovic roared into 2011 and won every match he played for six months. His near-record-breaking streak came to an end in early June when he was ousted from the semifinals of the French Open by Federer, but that was only a minor setback. Djokovic handily beat Nadal during the Wimbledon final a month later, securing his eighth title of the year. And he stole the 25-year-old Spaniard’s No. 1 ranking in the process.

Now, as the players head to North America for the summer season (the top three men are all slated to compete at the Rogers Cup in Montreal this month), there’s a sense that men’s tennis is suddenly in the grips of a dominant new force. Djokovic hinted as much when, after the Australian Open (which he won), he said of “Roger” and “Rafa” that “it was really hard to challenge them [before], especially in the big events where they play their best tennis. Now these things are changing.’’ Mahal is inclined to agree. “I can easily see him winning 10 or 11 majors,” he says. “He could have the same sort of dominance that Federer and Nadal have had.”

But while Djokovic’s rise to the top is a tremendous accomplishment, staying there could prove to be quite another. He will need to continue defeating Nadal and Federer on a regular basis, while holding off a host of other hungry top 10 players. And he will have to do it all under the glare of the spotlight that comes with being No. 1. It’s a tall order.

Perhaps more impressive than Djokovic’s 48-1 win-loss record in 2011 is the spectacle of “Nole” on the court. He runs down shots that might have given the “old” Djokovic trouble. His forehand is booming while his backhand—always a strong point of his game—has become a weapon in its own right. But perhaps most importantly, he can now return just about any serve that comes over the net, making it difficult for opponents to score easy points.

During a Master’s final in Rome, Nadal’s frustration with Djokovic’s play was palpable. While the slower clay court surface heavily favoured Nadal, Djokovic didn’t have any trouble dealing with Nadal’s heavy topspin groundstrokes—even when delivered to his backhand. At one point, an unusually frazzled-looking Nadal began lofting the ball to Djokovic’s backhand side in the hopes of bouncing it out of his strike zone. It made no difference. Djokovic won in straight sets.

So what is the secret to Djokovic’s sudden success? “When you get to that level it’s not just about doing one small thing better, it’s a bunch of things,” says Mahal. He notes in particular Djokovic’s improved serve and better court coverage. “The big thing with Djokovic before was his fitness level. He had that breathing problem, which had caused him to default in those matches, which gave him kind of a bad reputation.”

During the 2008 U.S. Open, for instance, hometown favourite Andy Roddick chided Djokovic for repeated courtside visits with a medical trainer, suggesting he suffered not only from a sore ankle, but also “bird flu,” “SARS” and a “common cough and cold.” When asked whether he thought Djokovic was bluffing, Roddick shrugged: “He’s either quick to call a trainer, or he’s the most courageous guy of all time.” Djokovic later eliminated Roddick from the tournament, but earned boos from the crowd who apparently felt he wasn’t being a gracious enough winner when he suggested the win proved he wasn’t faking it. 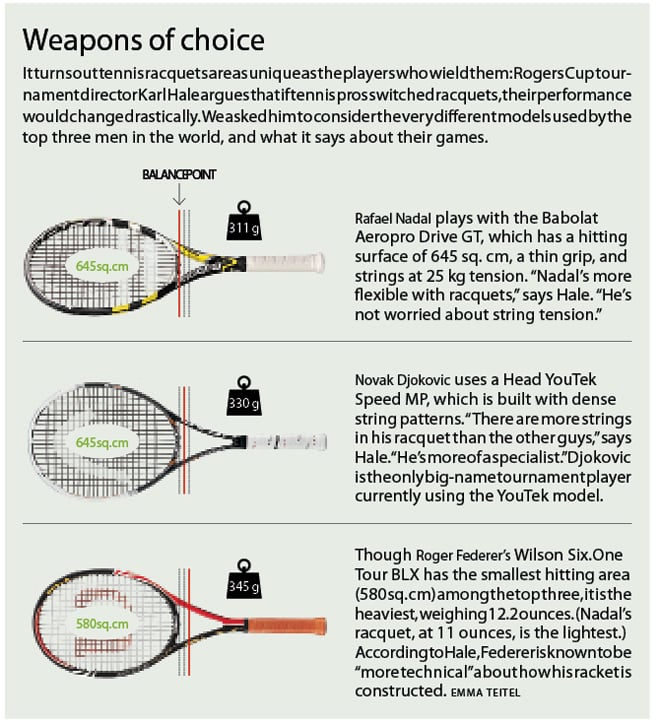 These days, Djokovic is letting his on-court performance do all the talking. Some commentators have credited a decision by his nutritionist to put him on a gluten-free diet, although it’s not clear if Djokovic’s earlier health issues were due to an allergy to the protein commonly found in flours, or whether he’s simply benefiting psychologically from a new regime. Whatever the case, it’s working. “I don’t think anyone thought he wasn’t talented enough,” says Mahal. “But it was a bit like a puzzle and now he’s put it all together.”

But as impressive as Djokovic’s ascension to the top has been, he still has a tough road ahead. Nadal is arguably the most athletic player the sport has ever produced, although his grinding, run-down-every-ball style has wreaked havoc on his body—particularly his knees. And while Federer, who is nearly 30, is in the twilight years of a remarkable career that includes a record 16 grand slam titles, he remains a threat in every tournament, as he proved during the semifinal of this year’s French Open when he beat Djokovic in four sets. “I don’t subscribe to the notion that Federer is done,” says Michael Cvitkovic, a former tennis commentator for the FAN 590. Unlike Nadal, Cvitkovic stresses that Federer’s elegant game has resulted in a mostly injury-free career, which can be a big advantage over the course of a gruelling 11-month season. “When you’re that good and you don’t have the knee problems that Nadal has gone through or the difficulties with endurance that Djokovic might have suffered, it plays a huge role.”

Djokovic also needs to keep his eye on Britain’s Andy Murray, who as little as two years ago was the favourite to challenge Federer and Nadal. He has never won a grand slam tournament, but the 24-year-old Scot has made it to the finals three times and is capable of a Djokovic-style breakthrough.

Regardless of whom he plays, the key for Djokovic is to finish points quickly and keep sets short. The longer Djokovic’s matches drag on, the bigger the risk that his old fatigue problems will reappear. On the other hand, he now has the mental edge that comes with knowing he is capable of beating Rafa and Roger in big matches. Cvitkovic highlights the difference that confidence can make by pointing to the Federer-Nadal rivalry that has mesmerized tennis fans for years. Even when the Swiss maestro was No. 1, he was virtually incapable of besting Nadal—particularly on clay courts. “Nadal was inside Federer’s head,” says Cvitkovic. “Djokovic doesn’t have that disadvantage anymore against Nadal or Federer and, quite honestly, it’s likely the opposite.”