The mighty vegetable is taking hold in a cooking revolution 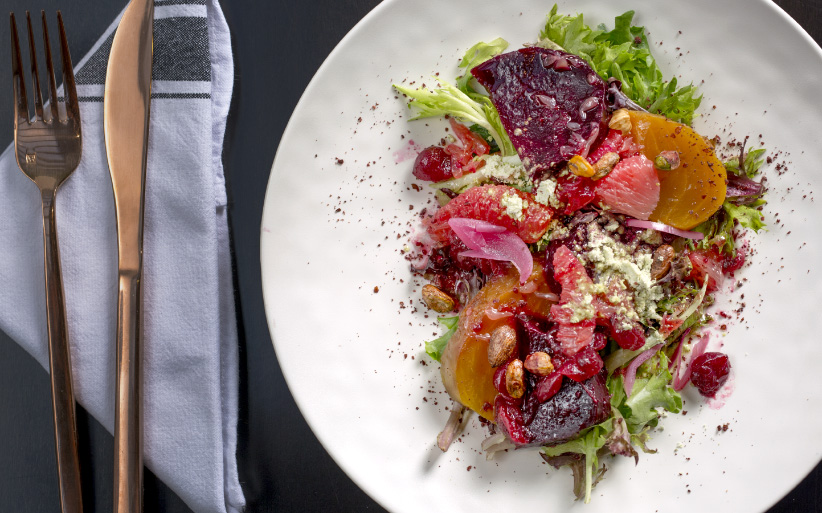 Beets and Grapefruit from Planta in Toronto. (Photograph by Chris Robinson)

At first glance, the new Toronto hot spot Planta offers plenty that is reassuringly familiar. The size of the place (165 seats) and its layout (soaring ceilings, private rooms, spacious, stone-topped bar) speak of good times, when restaurants with culinary ambition were conceived with grandeur and style. But on closer inspection, the conversation taking place here—culinary and literal—is something entirely new for this sort of Bay Street setting.

“The cauliflower tots are so good it’s crazy, and you’ve got to try the quinoa tartare!” is not the sort of thing you used to overhear one patron say to another when these same premises went by the names Pangaea, Acrobat or Noodles. But you hear it now.

Planta is a power restaurant of an entirely new sort. Its menu features no steak or foie gras or even line-caught fish. Instead, Planta’s take on the ultra-trendy Hawaiian poke salad is delivered with compressed watermelon standing in for marinated fish. The starring ingredient in the “crab” cakes is hearts of palm. And the vegetarian lasagna forgoes dairy-enriched béchamel or even a sprinkling of cheese in favour of a house-made cashew crema and nut-based faux-ricotta. Planta is not merely vegetarian—it is full-fledged, all-out, animal-product-free vegan.

Related: The controversial rise of the ‘flexitarian’

“When Steve Salm and I started talking concepts, we debated that a lot—should we go vegetarian or plant-based?” explains David Lee, the consulting chef in charge of the Planta project, of his formative conversations with Steven Salm, the restaurateur behind it.

At first, Lee was on the vegetarian side of the argument, largely because Planta was slotted to be open on Sundays, and brunch without eggs seemed unimaginable. At least until the summer day when Lee payed an inquisitive visit to Toronto’s Vegan Food and Drink Festival for a pulse-check on the local community. “They had 7,000 people there in one day,” chef Lee recounts with lingering astonishment. “So I changed my mind.” 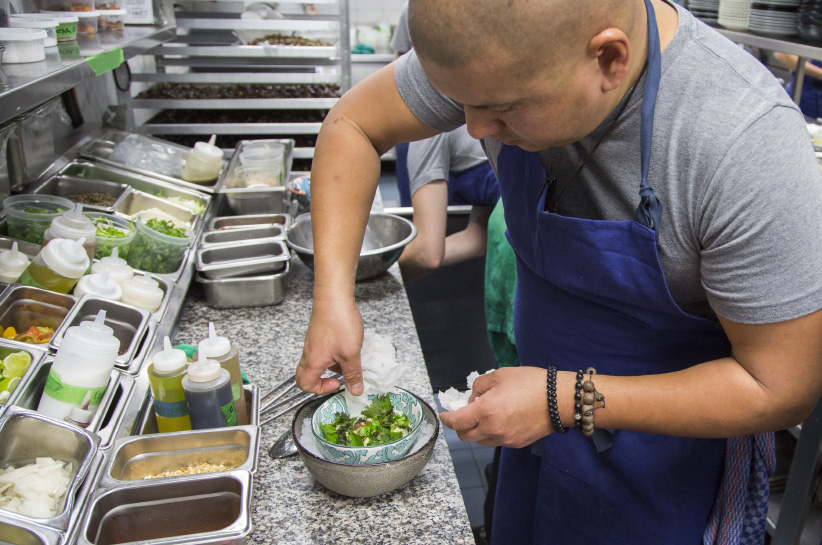 Lee is a chef with a long and distinguished career in fine dining. He is chef-patron at Nota Bene, where signature autumn dishes include a buttery puff pastry tart mounded with suckling pig and boudin noir (blood sausage). He also likes cooking game and has a passion for Texas barbecue. He is not vegan or even vegetarian. Salm is president of the Chase group, owners of the flashy financial district restaurant the Chase, as well as York­ville hotspot Kasa Moto and a posh bistro named Colette Grand Café in the trendy Thompson Hotel. He embraced veganism earlier this year.

The fact that two such restaurateurs were having a conversation about whether to launch a swanky new restaurant that was vegan or merely vegetarian is noteworthy. Five years ago it would have been all but unthinkable. It is symptomatic of a sea change in the way we eat out and cook at home.

Elsewhere in Toronto, a third of the short menu at Dandylion is vegetarian and often vegan, but no less satisfying and often more imaginative than the rest of the food on offer. But you can draw connections elsewhere across the country. At Montreal’s Hôtel Herman, Marc-Alexandre Mercier uses his pretty and artful sharing plates as a showcase for imaginative vegetable cookery. Across town at the wine bar Le Vin Papillon, chefs David McMillan, Frédéric Morin and Marc-Olivier Frappier are trying to do for vegetables what they did for meat next door at Joe Beef—and in the process have made a signature dish out of celeriac dressed with the warm garlic and anchovy sauce bagna cauda.

In Calgary, at Pigeonhole, chef-patron Justin Leboe has made an unlikely star out of a slice of pedestrian cabbage by butter-braising and grilling it, rendering it into something elevated through the addition of nutty mimolette cheese. A long way from vegan, obviously, but maybe in its context just as daring as the offerings at Planta.

“Five years ago, if I’d told anyone in Calgary that I wanted to open a restaurant with a menu that was 50 per cent vegetable-focused, like at Pigeonhole, they’d have told me I was crazy,” Leboe volunteers. Instead, he has a hot restaurant that is breeding local imitators. This rise in vegetable cookery is easy to spot but a little more difficult to place in correct culinary context. It is wrong to think of good vegetable cookery as something new because it has always been a big part of great western European cooking. From basic lemon-dressed fennel salad to eggplant parmigiana, Italian cuisine is littered with vegetarian classics. So is French haute cuisine. If you want to find a good vegetarian dish in the newish French style, you’d be well advised to pick up a 30-year-old cookbook by Raymond Blanc and make the leek and truffle terrine.

Still, it is a different sort of culinary statement when a great chef proclaims that vegetables are not just good enough to hold diners’ interest for the first course but for the entire meal—and a tasting menu at that. That’s what Alain Passard did at his three-Michelin-starred Paris showcase l’Arpège in 2001. His contemporary Alain Ducasse echoed that at his Paris three-star in the Plaza Athénée in 2014.

It must be noted though, that after the dramatic vegetarian-themed headlines each chef provoked, both of those great restaurants still serve meat and fish. Many Parisians snicker that the vegetarian tasting menus are really for American tourists. And many discriminating diners wish they’d known that going in.

“I really enjoyed it,” Leboe volunteered of his 12-course tasting menu at l’Arpège last year. “I really just think the vegetable tasting menu has been so overblown. The focus on the vegetarian menu means that too much of that great restaurant gets overlooked. I had a great meal, but when I saw the squab and other meat and fish dishes going by . . . I just felt I had to go back and eat that, too.”

Which in a nutshell summarizes where the new vegetarian cooking is really headed: to a new balance. For that we likely owe as much to American food writer Mark Bittman as we do to those two great French chefs and their headline-friendly gamble. Bittman’s 2008 bestseller Food Matters made a very convincing case that eating vegetarian for lunch each day took a lot pressure off our planets’ increasingly strained resources, not to mention our own red-meat-strained metabolisms. In short, swinging vegetarian once a day was the right thing to do.

“The thing is really that as we get older, our tastes and needs change,” says Jason Bangerter of Langdon Hall, a posh hotel and restaurant in Cambridge, Ont. He sources from his own garden and forages in the nearby woods to create vegetarian and even raw tasting menus of considerable repute. Often, the diners aren’t vegetarian but just want to try something new and different. “I remember as a young cook when I was at [Oliver & Bonacini restaurant group’s] Auberge du Pommier 20 years ago, we’d be going over new menus with Michael Bonacini and he would say, ‘Let’s do a nice, simple poached chicken with some good steamed vegetables,’ and I’d think to myself, ‘No! Let’s pan-roast the chicken with lots of butter and serve it with foie gras jus and crisp potatoes…’ But then you get older and you just can’t eat that all the time anymore.”

Which in the end is what makes the new vegetarian cookery so important and appealing. Well-prepared, vegetable-focused dishes generally make a much more convincing case for improving your dietary habits than any tedious warning your doctor might offer. And in the quest for something new, you may as well try out a place that goes all the way, for vegan food done right is just another intriguing cuisine to discover.

“The challenge is to be fulfilling and satisfying and make something that people will crave,” chef Lee says of his mission at Planta. “So you have to concentrate on texture and juiciness—and that’s difficult. Saltiness is hard, too. You can’t just stick a slice of parmesan on top of something. You can use nutritional [deactivated] yeast, which tastes like MSG. Truffle is good. Kombu is useful.”

So you’ll see that seaweed crumbled in the aforementioned watermelon poke, to delicious effect. There are texturally rich elements at play in his “ceviche” of young coconut. His cauliflower tots are indeed great fritters. And if, instead, you crave something meaty, you can follow in the footsteps of generations of Chinese—with their (tofu-based) mock duck and mock chicken—and try David Lee’s hot dog at Planta: He steams a perfect organic carrot, then lends it some umami flair with a stint in the smoker, and finally packages it up it with pickle and mustard in a turmeric-infused bun. Close your eyes and you actually might be fooled. Open them and you will understand that it’s better. And when you walk away, you feel good, too. It’s a fresh new cuisine, enabled by the rise of the vegetable at large, as important an evolution as we’ve witnessed in restaurant cooking for a decade or two.