The motor-trike built for Boomers looks for a jump-start

The three-wheeled Spyder may never catch on with the young and hip. But its greying 'Ryders' are a ready-made sales team. 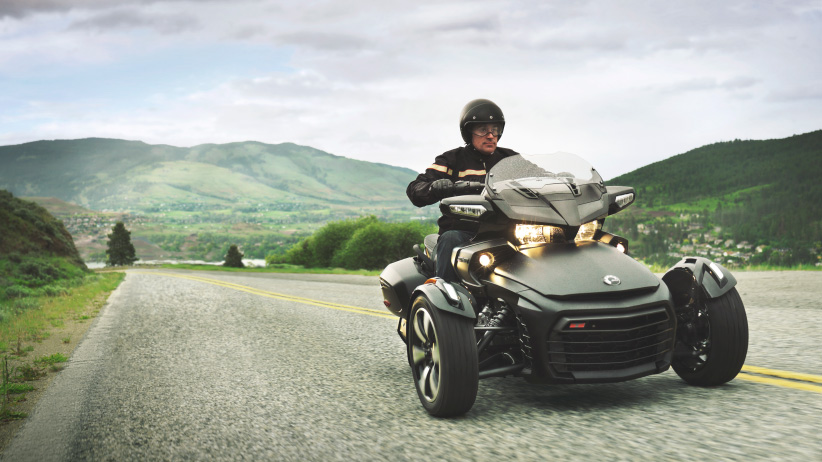 One day in 2008, George Parry was sitting in his truck at an intersection when a strange, bright yellow three-wheeled vehicle zipped along the road in front of him. “I was like, ‘I have to have one of those,’” he recalls. Parry, who lives in San Diego, went home and searched the internet for variations of “three-wheeled motorcycle” until he found a match: the vehicle was called a Spyder, manufactured by Valcourt, Que.-based BRP Inc.

For Parry, the moment at the intersection proved serendipitous. He rode motorcycles as a young man, but gave up the practice after he got married and had kids—not to mention the fact that he has a genetic disorder that leaves him with bones that easily break. The Spyder, essentially a tricycle for adults designed with two wheels in front and one in the back, provides some of the thrills of a motorcycle without the risk or requisite technical abilities. Parry put 85,000 miles on his first Spyder, and he’s now on to his second. His wife owns one, too. Parry even serves as the national director for Spyder Ryder of America, an organization for enthusiasts (the motto? “It’s about the RYDE…Not the destination.”) And he tracked down the owner of that yellow Spyder. “He’s become one of my best friends,” Parry says.

BRP could use more customers like Parry. The company, spun off from Bombardier Inc. in 2003, builds Ski-Doos, Sea-Doos and other recreational vehicles. BRP introduced the Spyder a decade ago as an alternative to the motorcycle, courting wealthy Baby Boomers and retirees who have aged out of riding Harleys, or were too intimidated to start in the first place. Since then, the company has produced more than 100,000 Spyders, and it’s grown into an improbable success, accounting for approximately $300-million in revenue last year.

But growth may have plateaued. Sales fell in the “high single-digits” last year, company CEO José Boisjoli said on a recent earnings call. In the U.S., for example, BRP sold only 6,700 Spyders in 2016 compared to 8,500 the year before, according to one analyst who follows the company. Boisjoli characterized it as a “disappointing” year. That’s why BRP installed a new executive to oversee the division last fall and implement a plan to boost sales. But it remains to be seen how much more the unit can really grow, especially beyond its core group of early-adopters. “My view on the Spyder is not as optimistic as the company’s,” says Seth Woolf, an analyst with Northcoast Research in Ohio. “They’ve created a nice little business, but I’m not convinced the ceiling is much higher.”

That’s where Josée Perreault comes in. She joined BRP as senior vice-president for the Spyder division in October, after spending more than 20 years at sports equipment maker Oakley Inc. She stresses the issues facing the Spyder are not entirely surprising. “BRP invented the three-wheel business 10 years ago,” Perreault says. “In my books, it’s still a brand new business.” She’s spent the past few months immersing herself in Spyder culture—meeting with dealers and owners as far away as Japan, and going on rides herself. Her plan is to address some of the barriers that prevent people from trying out and ultimately purchasing Spyders. If BRP can just get more people to actually take one for a spin, Perreault argues, sales will improve. “Butts on the seats are critical for our future,” she says.

The licensing system presents one hurdle. Each province and state has a different approach to three-wheel vehicles. Drivers in California can hop on a Spyder with only a regular automobile license. Other jurisdictions require riders to get motorcycle license, or a variant thereof. The problem is not every driving school offers courses for three-wheeled vehicles because there haven’t been enough students to make it profitable.

To remedy that, BRP is reaching out to driving schools primarily in the U.S. to pitch them on the business case for offering classes for trikes. In the past few months, the company has convinced 17 schools to implement one. In some jurisdictions, BRP is also offering to cover part of the cost of these courses for those who purchase Spyders. In Ontario, for example, BRP will pay up to $489. Subsidizing ridership does not exactly point to a bright future for the Spyder, but Perreault says it’s helping to reduce one more obstacle for customers.

The other major component she’s tackling is the dealer network. “When your sales have been difficult,” Perreault says, “dealers might be disengaged.” Spyders are sold through independent stores that carry multiple products and brands. If those dealers are not properly educated or enthusiastic about the Spyder, they’re not likely to sell many of them. BRP has launched “Spyder Experience Days” as a result, essentially taking over dealerships for a weekend, and bringing in veteran Spyder owners to lead demos, answer questions and spearhead group rides.

Woolf at Northcoast says these efforts will help, but believes the impact will be limited. “Dealers will devote plenty of attention to a product if they feel it will make them money,” he says. The reality is the three-wheeled market is small, and the Spyder is not the only product of its kind to be stagnating. A U.S. company called Polaris Industries also manufactures a three-wheeled vehicle called the Slingshot, which is more akin to a car than a motorcycle. Woolf says the sales trajectory for the Slingshot is similar to the Spyder, and growth is levelling off.

The Spyder isn’t cheap, either. Prices range from $17,000 to more than $26,000 in Canada. “One of the things I’ve really been trying to hammer home to the company is that price point,” says Tony Younger, president of a Spyder rider chapter in Sacramento, Calif. He’s suggested to BRP representatives that an entry-level model would help sales and attract a younger demographic. For now, though, the company has no plans to court younger buyers. The typical Spyder owner is 62-years-old, predominantly male, with time and money to spare. “If our current client is 62, let’s embrace that,” Perreault says, adding she wants to do a better job of tapping into the enthusiasm that already exists.

Indeed, there is a strong fan culture around the vehicle. Spyder clubs and chapters have popped up across North America to organize group rides and participate in community events and parades. YouTube is rife with videos of reviews, demos and helmet-cam footage. A healthy aftermarket exists for owners to trick out their Spyders with LEDs and decals (flames and spiders are evidently popular). Next month, BRP is hosting a “homecoming” weekend event in Valcourt to celebrate the Spyder’s 10th anniversary, and 2,800 owners have signed up to attend. Parry and his wife will be cruising on their Spyders more than 3,000 miles each way to take part.

Devotees say that over those 10 years, the Spyder has become more accepted and less of an oddity. When Younger gives a wave to an oncoming motorcyclist these days, the rider will now return the gesture. “There’s still about 10 per cent who don’t salute back, just because they don’t consider it to be a true motorcycle,” he says. Parry echoes this sentiment. “It’s being taken more seriously,” he says. Whether people take the Spyder seriously enough to purchase one is another matter.