The new royal baby: More than a spare to the heir

The princess will share an unbreakable bond with brother George 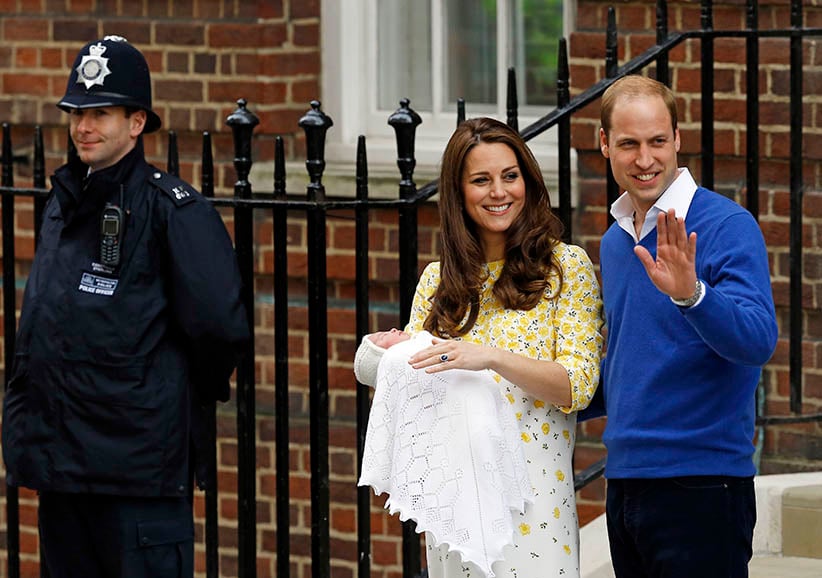 The birth of every child is joyous. And while parents, relatives and friends fuss over the newest bundle, the oohs and aahs that welcomed the first-born are replaced with more muted celebrations. They’ve been there, done that. Still, a second child enjoys the benefit of inheriting tantrum-tested parents. Muscle memory automatically switches a fussing babe into a better arm position while tiny diapers no longer appear to be geometry experiments with sticky flaps.

Those differences are on stark display when that second child belongs to Prince William and his wife, Kate. When George was born on July 22, 2013, his arrival made front-page headlines around the world. After all, he will one day follow his father, grandfather and great-grandmother onto the throne. For weeks before George’s arrival, hordes of media had camped outside St. Mary’s Hospital, while a live feed of its front doors was watched by millions. This time, the media assembled only after Kate was in labour, though, like last time, she was reportedly well past her due date. In 2013, gifts for the baby included a fatted bull and a 17th-century manuscript. This time, more traditional congratulatory letters are expected for the princess.

Sure, pretty much everyone with an opinion wanted a girl, including Prince Charles. A desire for frou-frou has been building for years. It’s been 65 years since a princess was born in the main line of succession (Anne in 1950). No wonder that on the William Hill betting site, the top six names—with Alice at No. 1—were all girls, followed by James with rather paltry 14:1 odds.

Thanks to legislation passed in all 16 realms, this princess, and all future girls, will not be shuffled down the line of succession if a son comes along later. Now birth order alone determines a Windsor’s relationship to the throne.

After a 21/2-hour labour, Kate gave birth to HRH Princess Charlotte Elizabeth Diana of Cambridge at 8:34 a.m. on May 2. She weighted 8 lb., 3 oz, and her arrival was greeted with incredible excitement. Yet all the frivolity takes nothing away  the import of a second royal child. HRH Prince George Alexander Louis of Cambridge is the future king of Britain and, at least for now, 15 other realms around the globe. His destiny is set. He will wear St. Edward’s crown at a glittering coronation. By contrast, his sister has one preordained role: George’s back-up.

“First the heir, then the spare,” is the age-old royal motto. Passing the throne safely to the next generation is an all-consuming obsession for a family that can trace its lineage back to Egbert of Wessex (770-839 CE). It may sound cold and calculating, but having children is especially fraught when the family business involves reigning over a population of more than 140 million. Add in the entire Commonwealth, which is headed by Queen Elizabeth II, and that number soars to 2.2 billion, nearly a third of the planet.

There’s a reason why there’s always a back-up, and even a back-up to the back-up: stuff happens. Of the last four monarchs, two have been the second son. In 1892, Albert Victor, the heir to the heir of Victoria, died suddenly of pneumonia. His brother George took his place in succession, and also inherited his fiancée, Mary of Teck. In 1936, after Edward VIII hot-footed it out of Britain to marry his twice-divorced American girlfriend, it was the present Queen’s father who stepped in to be king.

Being the second child may seem like an easy sinecure—all the perks without any of the responsibilities of being sovereign—but it can be a difficult position. Like politicians such as U.S. Vice President Joe Biden, they have to create a role for themselves beyond just being a spare. Yet unlike politicians who spend a few years close to the seat of power, for Windsor spares, it is a gig for a lifetime.

For 29 years, Prince Harry was the spare for his older brother, William. Then came George. It’s no wonder that when Harry was asked for his own reaction to being pushed further down the line of succession on the announcement that baby No. 2 was on the way, the prince grinned broadly, “Great!” But Harry is too close to the throne to eschew royal obligations like his cousins, who work in the private sector. He’s one of four councillors of state, charged with carrying out many of the Queen’s duties in her absence. 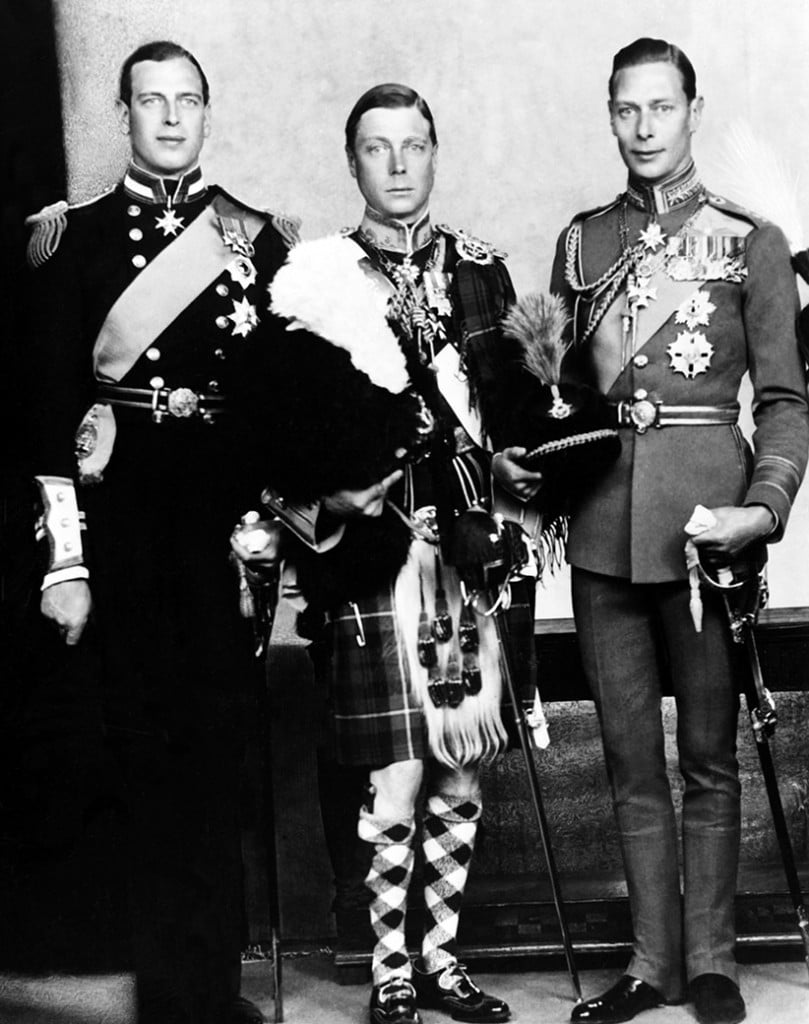 Now, after 10 years in the military, including two combat tours in Afghanistan, Prince Harry, 30, is figuring out what he is to do next. He’ll have to carve out a path that plays to his strengths—an impish sense of humour, his military experience and an ability to connect with everyone, especially children—without upstaging his big brother or father as they move up the royal chain of command.

“Don’t do anything and you’re lazy, a drain on taxpayers. Do stuff and [be criticized] for the expense of travel,” says Jessica Morgan, who co-wrote The Royal We, a funny fictional riff on William and Kate’s romance that features Freddie as a charming, yet troublesome spare who is Harry in all but name. “It can be lose-lose.”

His privilege also comes with a distinct lack of privacy. Most soldiers can go to Las Vegas for a weekend of drinking and strip pool, safe in the knowledge that what happens there, stays there. Not so for the world’s most eligible bachelor. After his naked body was in every newspaper, Harry had to face not only his superiors, but his commander-in-chief grandmother, the Queen. While that family conversation could not have been pleasant—though the Queen is famous for discreetly signalling her displeasure rather than directly confronting a relative—Harry can boast an extended family that will rally around a royal under seige.

One of the unseen but most important jobs of a sibling to a future monarch is friend and confidant. With only two years separating them, William and Harry went to the same schools, including Eton and Sandhurst military academy. Though Charles and Diana tried to protect them from their nasty, public marital spats, those trying times forged a bond between the brothers that is unbreakable. “He is the one person on this Earth who I can actually really, you know, we can talk about anything,” Harry said of his older brother in 2005. “We understand each other and we give each other support.” Not only are they both helicopter pilots, but they share passions, including charities that focus on Africa. 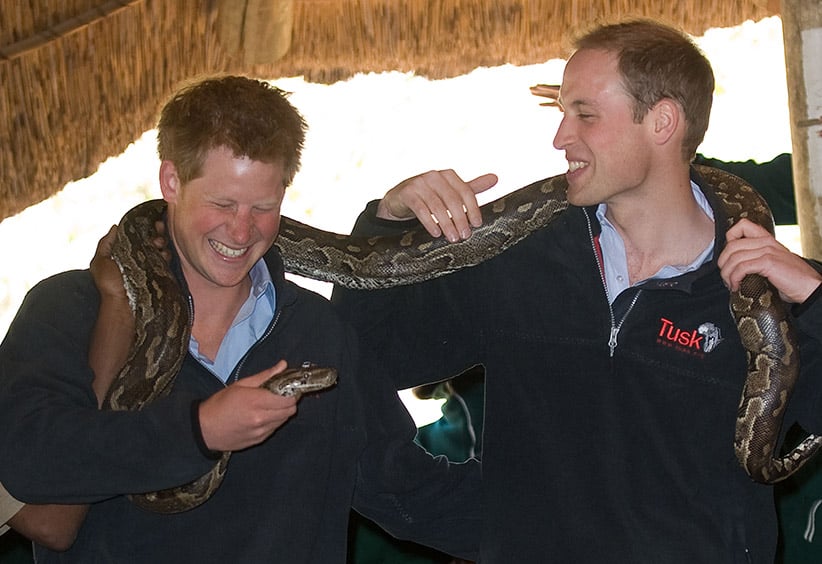 Prince William and Prince Harry joke as they pose with an African rock python snake when they visit Mokolodi Education Centre on June 15, 2010 in Gaborone, Botswana. The Princes are on a joint trip to Southern Africa and will visit projects supported by their respective charities Tusk Trust (Prince William) and Sentebale (Prince Harry). Royal baby. Samir Hussein/WireImage/Getty Images

“You’ve got a really trusted sibling who is incredibly complementary to you in character as well as in outlook and belief and ideals and values and that sort of thing, which Prince Harry undoubtedly is with Prince William,” says Jamie Lowther-Pinkerton, the princes’ former privacy secretary, in the recent biography of Harry by author Penny Junor. “He can apply different skills and talents to some of the issues that William as monarch may not have the time for, or which might not be quite appropriate for the top man to do but which the man one down can do.” William and Harry “bring the best out of each other,” a family friend told Junor.

Royal siblings can also be counted on to read each other the riot act, or act as buttresses in times of trouble. Spares understand the lifetime of responsibilities that face an heir. In 1936, when the crown was unexpectedly passed to their father, now George VI,  Princess Margaret, 6, asked her 10-year-old sister, Elizabeth, “Does that mean you’re going to be queen?” It did. “Poor you,” is all Margaret could say. She grew up to be a haughty and hot-tempered princess famous for her partying and drinking. Yet in private, she was Elizabeth’s sounding board, someone who could be assured to never repeat a regal confidence. The sisters talked on the phone or in person virtually every day until Margaret’s death in 2002. 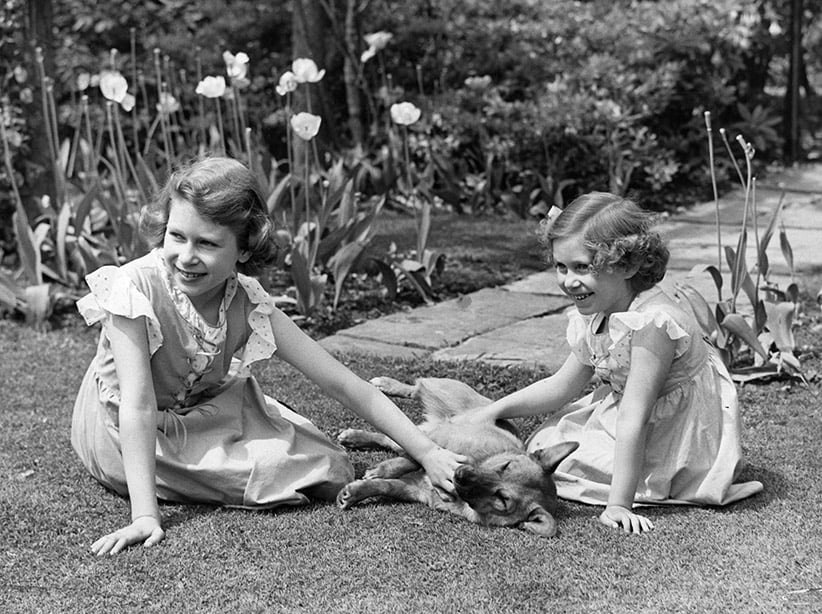 Princess Elizabeth and Margaret with a corgi
Ullstein Bild/Getty Images

This newest Windsor will also perform that important role as support for the future monarch. When Kate’s second pregnancy was revealed in September, Harry said, “I think George will be over the moon. I think he will be thrilled having another small younger brother or sister.” With a mere 21 months separating George from his sister they’ll be able to get into plenty of mischief together at their homes in Kensington Palace in London, and Anmer Hall on the Queen’s Sandringham estate in Norfolk.

Prince William and Kate may have a professional nanny in Spanish-born Maria Teresa Turrion Borrallo, but they are hands-on parents, determined to establish a stable, happy family life before the crush of responsibilities and duties transform them into full-time royals. During their 2014 trip to New Zealand and Australia, images showed young parents casually wiping away drool from Prince George’s chin and distracting the rambunctious baby when he started getting squirmy. 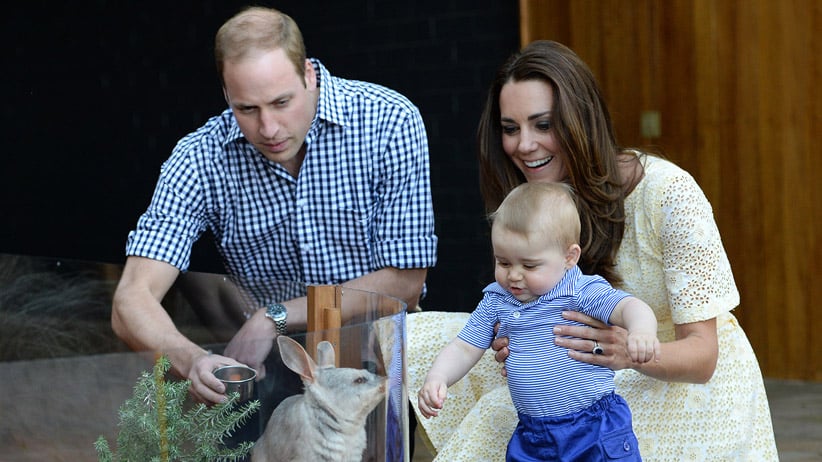 George is already showing flashes of a strong, independent mind. A year ago in New Zealand, “Cheeks,” as he’s been nicknamed, grabbed toys from a girl during a playdate. More recently, when Kate told her son that his father was in China, he toddled over to the china cabinet, peered inside and proclaimed, “Daddy is not here.”

The children will benefit from belonging to a tightly knit extended family, both Windsor and Middleton. Harry lives around the corner, while Kate’s sister, Pippa, is a 30-minute walk away in Chelsea. Kate’s parents, Carole and Michael, are very close to their daughter and son-in-law. After George was born, Kate and William moved into their home for a few weeks. It was there that Michael took the first informal post-hospital snap of the new family. Now the grandparents are expected to reciprocate at Anmer Hall, where William is based for his job as an air ambulance pilot.

While Prince Charles doesn’t spend as much time with George as the self-employed Middletons—his schedule is famously full—there is clearly a bond. In a recent palace video, a picture of Charles comfortably holding his grandson could be seen in the background.

For a monarchy that has survived civil wars and revolutions, true security comes with heirs and spares. George III had 15 children, yet in 1817 his family was threatened with extinction when his only legitimate grandchild, the immensely popular Princess Charlotte, died in childbirth. The king’s surviving sons were forced to ditch mistresses and curb their dissolute ways to both marry and procreate. The result was seven grandchildren.The closest to the throne inherited it at 18 from uncle William IV. Her name was Victoria.

On Sept. 9, Victoria’s record as the longest-reigning monarch will finally be surpassed by her great-great granddaughter, Elizabeth II. It’s a moment worthy of the history books. However, when the Windsors sit down in Sandringham this Christmas, there’s little doubt of what will be the family’s top event of 2015: a new baby in the family.