The odd parallels between Donald Trump and King Edward VIII 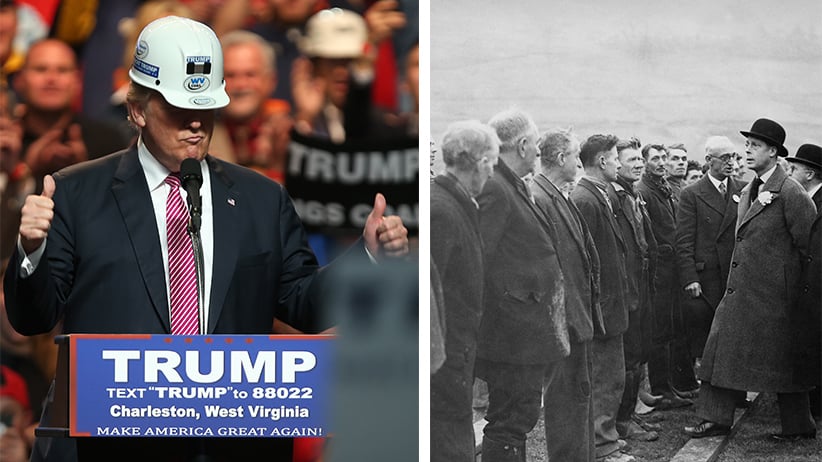 On the surface, Donald Trump has nothing in common with King Edward VIII. One is a tall American billionaire (born in Queens, N.Y.). The other is a slight royal (born in a lodge outside London). Yet compare the two and some striking similarities pop up. In the wake of America’s Inauguration Day, I’ll skip Donald Trump’s background, since so many know so much about the new American president, and concentrate on that of King Edward VIII.

1. On Jan. 20, 1936, King Edward VIII came to the throne following the passing of his distant, unemotional predecessor (his father, King George V). At the time, the British Empire, including Dominions like Canada, accounted for roughly a quarter of the Earth. It was arguably still the most powerful nation, though its standing and might had been waning since a brutal war.

2. He was a populist, seen as a man of the people when he toured areas of Britain drowning in the economic misery of the Depression, especially mining regions in Wales.

3. “Something must be done,” was his famous quote from 1936 about wanting to help those out of work.

4. While living in stupendous luxury, he quietly fired royal staff and cut the wages of those still employed on royal estates.

5. At the same time, he was showering his mistress, twice-divorced Wallis Simpson, with jewels, treasures and even champagne taken from royal cellars.

6. Family saw him as a vain and weak man, easily led by those around him.  “After I am dead, the boy will ruin himself within 12 months,” George V said.

7. He openly mocked his loving, family-oriented brother, Bertie, who was married to Elizabeth and had two young daughters, Elizabeth and Margaret.

9. The king admired strongmen, especially the most powerful dictator of his era, Adolf Hitler.

10. When state papers were being returned from Edward’s residences with glass rings on them, it was discovered he was leaving them around where anyone could read them.

11. Given Edward and Wallis Simpson had a close relationship with Hitler’s ambassador, Joachim von Ribbentrop, government officials feared their secrets would fall into the hands of the enemy. So they restricted the king’s access to the documents.

12. He was prone to temper tantrums and was famously stubborn.

Not all the analogies fit precisely, but there are enough to cause one to pause, and reflect.