'The oil prices ate my budget!' 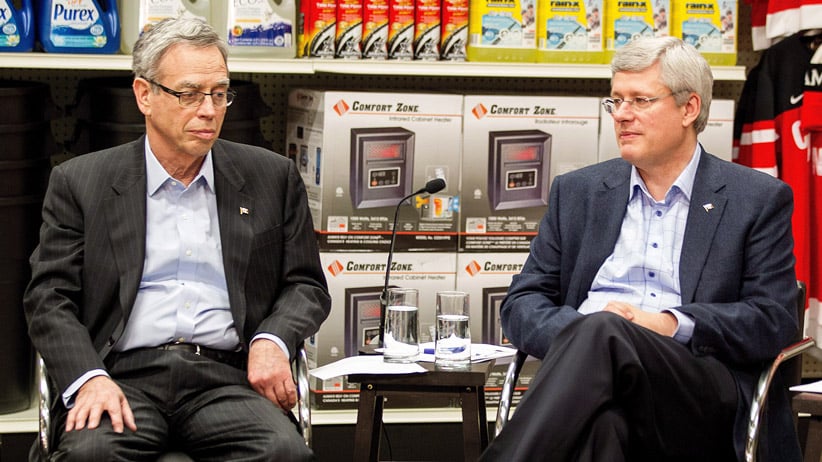 See that photo up above? I love that photo. You’ve got Prime Minister Stephen Harper alongside Joe Oliver, the beleaguered finance minister who recently delayed his 2015-16 budget. They’re at a Canadian Tire doing a roundtable or whatever. It doesn’t matter. What matters is the look on Oliver’s face. And the fact that the two most powerful people in government—currently grappling with a free fall in the price of oil—appear to be hosting a segment on the Shopping Channel.

Harper: OK, Joe, what do you have for our viewers today?

Oliver: [Maintains the haunted, 1,000-yard stare of a man being forced by his boss to balance the budget in a time of declining revenues.]

Harper: How about those space heaters behind us? They look useful!

Oliver: [Quietly yearns for the power to travel back through time and pursue literally any other career path. Oboist. Architect. Milkman. Do they still have milkmen? Could have had a great life delivering that milk.]

Harper [long pause]: I’m going to drink your water, too.

It’s not been easy being Joe Oliver. After revealing he wouldn’t deliver a budget until April at the earliest, the finance minister did the rounds of the political talk shows. He sounded like a teenager explaining an overdue essay. Well, Bob, my computer crashed, so I couldn’t use Excel, and then my brother swiped my lucky budget-making pen. Also: ghosts.

Oliver’s act hasn’t been convincing, because oil isn’t really that big a deal when it comes to the federal budget. We’re talking about being maybe $7 billion light—a bummer, to be sure, but hardly enough to warrant a fiscal reboot. Our finance minister has set the budget-delaying bar kind of low. A change in the market price of a notoriously volatile commodity probably shouldn’t prompt a government to freak out as though we’re reverting to a barter economy. (Harper’s next tax credit: one chicken if your kids play sports.)

Still, there’s no denying that oil’s decline comes at the worst possible time for a PM who has long promised a balanced budget in his re-election year. Other elements of Harper’s strategy have already been set in motion:

He’s been appearing in front of larger and larger Canadian flags. The flag behind him during a recent speech in Ottawa was one of the biggest yet. It feels as though this is leading up to something. Maybe a maple-leaf face tattoo? The adoption of a rescue beaver?

He’s jamming the government advertising down our throats. We can’t watch a hockey game without hearing four or five times about how we’re only a year away from being another year away from Canada’s 150th birthday.

He’s been talking extra tough on terrorism. The PM recently declared of Islamic State combatants: “If those guys fire at us, we’re going to fire back and we’re going to kill them.” Which reminds me: Maybe Harper’s staff is letting him dress up in fatigues and military-grade khaki a little too often? Sir, no offence, but most of us suspect the only thing you’re capable of killing is a good mood.

What will be accomplished by the delay? Best as anyone call tell, Oliver is simply hoping that oil prices begin to increase—so he can forecast a revenue target that doesn’t seem absurdly optimistic. Our finance minister is basically a racetrack punter as the horses enter the stretch. Come on, crude! Come on, baby! Daddy needs a new set of fiscal projections!

For the record, NDP Leader Thomas Mulcair has called on the Conservatives to stop playing peekaboo with the budget date. And yes, he actually said “peekaboo.” Weird, right? Or perhaps this is part of a broader NDP strategy to concede the 2015 election and build for the future by nailing down the toddler demographic: Why keep advocating for Keystone XL when it’s clear the U.S. President has got the Prime Minister’s nose? Yes he does! YES HE DOES!

In the meantime, Oliver has doubled down on Harper’s dubious view that a balanced budget in 2015 is an economic necessity. “We think it’s wrong morally to transfer debt to our children,” Oliver said. This is a curious argument to make when your government has just run seven consecutive deficits that have transferred more than $170 billion in debt to children. But maybe those children had it coming.

Bottom line when it comes to the Harper view of running a deficit: Our government would never, ever do the thing it just repeatedly did.