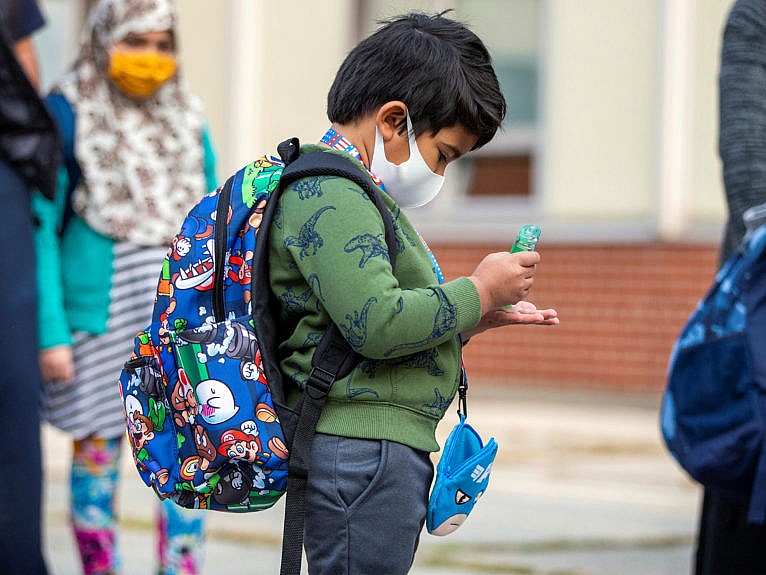 My son is six and eagerly learning to write, though his sentences sometimes require arrows to connect one thought to the next. Last week, he left me a note with both directional instructions and an “o” shared between two words, like in a crossword puzzle. Deciphered, it read, “Momey [sic], I hate Covid-19. I hope it stops soon.”

Last spring, he went months without age-appropriate socialization, and it was bad. There were some truly worrisome tantrums. So he’s at in-person school right now, even though COVID showed up in his class just three weeks in. As he constantly reminds me, I don’t have to wear a mask all day like he does—and while I hate that, it seems to have protected him through round one of direct viral contact. Thankfully, it didn’t spread past the child who brought it in, who got sick but not frighteningly so.

Kids are resilient. For parents, the sentiment has become a little prayer, as we face a never-ending series of impossible decisions. It’s invoked by equally worried teachers, too: educators across the country leaned on the idea while coping with the scrambled spring shift online. “In terms of learning, kids are resilient,” said Tara McMillen, principal of Christ-King Catholic School, to Alberta’s Stettler Independent in April. “They’ve all adjusted as best they can to the technology.”

While it may be true for most children, their ability to bounce back isn’t an excuse to neglect them. But a particularly ugly version of the economy is being prioritized over young people’s well-being. It hasn’t always been justified when we’ve asked them to bend (months without friends), and bend (perhaps a year without grandparents), and bend (forget sports) and bend again (no trick-or-treating). Eventually, some of them are going to break. (Already, drownings are on the rise in Quebec due to swimming lesson shutdowns; and soaring screen times are reportedly leading to new health problems.)

Last April, Ontario Premier Doug Ford said that schools would reopen only after adults went back to work (unspecified, as always, was how to do that while also supervising homeschool). “I know our kids are resilient, but still my No. 1 concern is protecting our kids out there,” he said. In the end, March break lasted six months, which would have been okay if he had actually spent the summer figuring out how to make back-to-school as safe as possible. But in August, his government resurfaced with no real plan, dodging questions about medically recommended class sizes.

Hardly a surprise—former education minister Lisa Thompson used the magic word way back in March 2019. Defending proposed budget cuts, she said larger classes would prepare high school students for “the world of work” by helping them develop “resiliency.” Which explains the crickets from Ford’s team when soaring infection numbers led to a massive late-September shift to online learning, and a shuffling of teachers that left some classrooms more stuffed than before. Big classes make kids resilient. That’s the Conservatives’ line, and they’re sticking with it.

There are young people in Canada whose resilience was already a trope: Indigenous children faced disgusting negligence well before COVID, and many others head to class with a backpack full of disadvantages. In Stettler, principal McMillen at Christ-King managed to get grocery store gift cards to families whose children relied on the school’s breakfast program. “These are difficult times,” she said. “As teachers, we live to help our kids–that is our job.”

Toronto is one of the few places in Canada releasing ethno-racial and income data about COVID-19 and the evidence is clear—being white and/or rich is good pandemic protection. Follow the trail: in mid-October, 2,000 Toronto District School Board students enrolled in virtual classes were still waiting for an internet-enabled device. Virtual learning was more likely to be chosen by families in low-income neighbourhoods, which are largely racialized. Only 49 per cent of parents with kids in virtual classes have a university degree, which often means their work brings an increased chance of coronavirus exposure. Their fear of brick-and-mortar school is justified. And their children still have a right to a good education. Instead, a new generation is being set up to become the expendable workers currently keeping the world running: the Cargill meat workers who have been called—yes—resilient; the grocery clerks that (despite soaring profits) billionaire owners couldn’t bear to pay an extra $2 an hour.

What kids are enduring is what we’re all coping with: a scary virus, yes, but also an insistence in valuing profits over people. Children who are already suffering will only be hurt more. And young people with the luck—and privileges—to come out okay will be held up as evidence that putting them last didn’t matter.