The princess is home! The 8th, and last stage of the #GreatKateWait

Just as there are five stages of grief, there are eight stages of royal pregnancies. Patricia Treble explains. 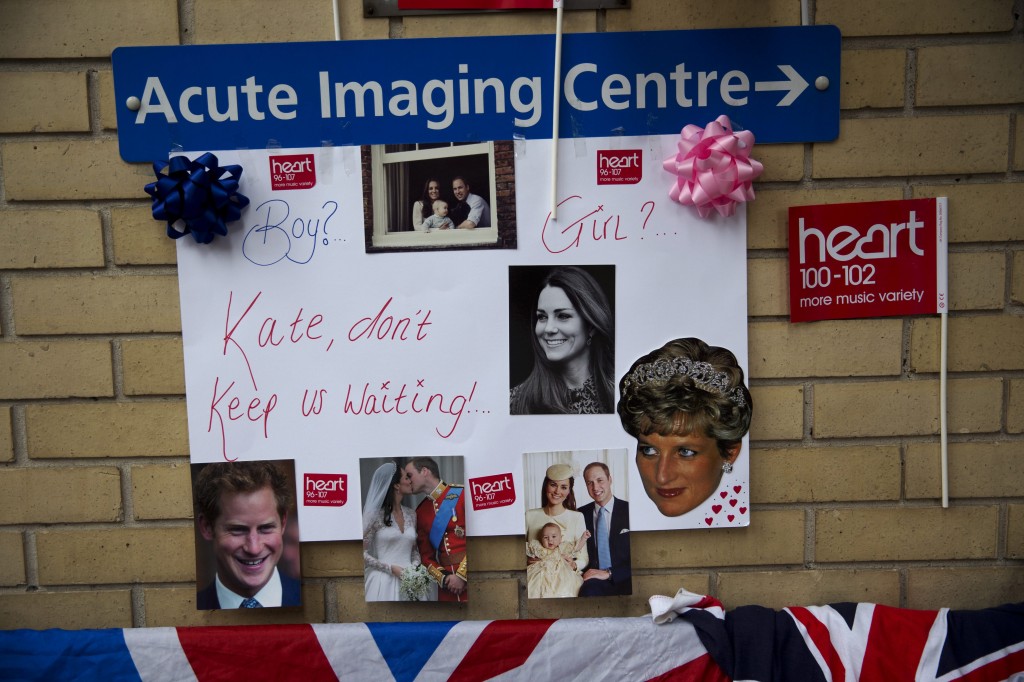 A banner made by royal fan John Loughrey, aged 60, hangs stuck to a wall across the street from the Lindo Wing of St. Mary’s Hospital in London, Thursday, April 23, 2015. (Matt Dunham/AP)

There are five stages of grief, 12 steps in Alcoholics Anonymous and 21 parts to this year’s Tour de France.

For royal pregnancies, there are eight stages:

1. Idle speculation: No one has any idea if a royal is pregnant, so hey, let’s gossip. A year ago, rumours were flowing during Prince William and Kate’s tour of Australia and New Zealand. She put a swift end to the speculation by not only drinking wine, but also going on a rough river excursion.

2. Educated guesses: A mere four days before it was revealed that Kate was pregnant with her first child, I counted belt holes in three separate outfits—yes, this is the life of a royal specialist—and came to a conclusion. As I wrote at the time, “It could just be a confluence of fashion choices, but after this week I’ve changed my stock answer. Now it’s ‘We won’t know officially until they announce it, but I think she could pregnant.’ ”

3. The announcement: Both of Kate’s pregnancies were revealed well before the three month mark. The first when she was merely four to six weeks along, because she was in hospital with severe morning sickness. The second when she was around two months pregnant, again because she backed out of an engagement due to the same illness. This news sends the media rushing to calendars to shift vacations out of the arrival zone.

4. The last trimester: As her belly gets bigger and bigger, stories start appearing about baby carriages, nannies, her maternity leave, and where she’ll give birth. Her fashion is analyzed and evaluated. For this pregnancy, What Kate Wore created the definitive guide to Kate’s maternity clothes.

5. The last month: This is complicated because no royal reveals her exact due date. They aren’t idiots. Any such declaration will automatically spawn stories proclaiming she has two days to go or is two days over In March, royal officials briefed the press that the new baby was due in mid-to-late April. That’s it. So all those stories that authoritatively claimed her due date was April 25, or April 28, are just cannon fodder.

Speculation mounts about what name will be picked—Alice is touted this time—as well as possible godparents. As days tick by with no news, the approaches to Kensington Palace and Buckingham Palace are staked out. Royal watchers obsessively check their phones for official notice that Step 6 is here. No bit of news is too small to mention.

6. Labour: To turn Winston Churchill’s famous quote on its head, it’s not the end of the beginning, but perhaps the beginning of the end. Notification that Kate is in the Lindo Wing of St. Mary’s Hospital gives permission for all the news organizations to cover the new baby 24/7. Of course, there is no more news than in Step 5—aside from the fact that she’s in labour—but that’s never stopped news channels. The phase only ends with official word of the birth. For George, the news came so close to evening deadlines that newspapers were in a panic. Finally the news was broken, not by traditional notice on an easel at Buckingham Palace, but an email to the media. (Note: if the baby arrives after 10 p.m. local time, then there will be no news until 8 a.m. the next day. Why? Because great-granny has to be told before the public, and the 89-year-old likes a good night’s sleep. Also, she’s the Queen. Who is going to wake her up?)

7. Appearance: Around 24 hours after the birth, [UPDATE: this time, they left within 12 hours, posed for pictures, but answered no questions] the mother and dad will leave the hospital with their child. Usually they will pose for pictures, and answer a few questions before retreating behind palace walls. Interestingly, most royal mothers are far more careful with their appearance with the second child, than the first. This precedent was likely broken with Kate, who was professionally made up (hair and make-up) before leaving with George.

8. Naming the new Windsor: This can happen at any time in the first few days. There seems to be no rhyme or reason as to the timing. Most royal children have four first names, George has three. And that ends the #GreatKateWait, 2015 edition.

It may be repeated in a year or two, or three. Or not.