The problem with 'Problematic'

One word's meteoric journey from academic jargon to mainstream language to over-used cliché. 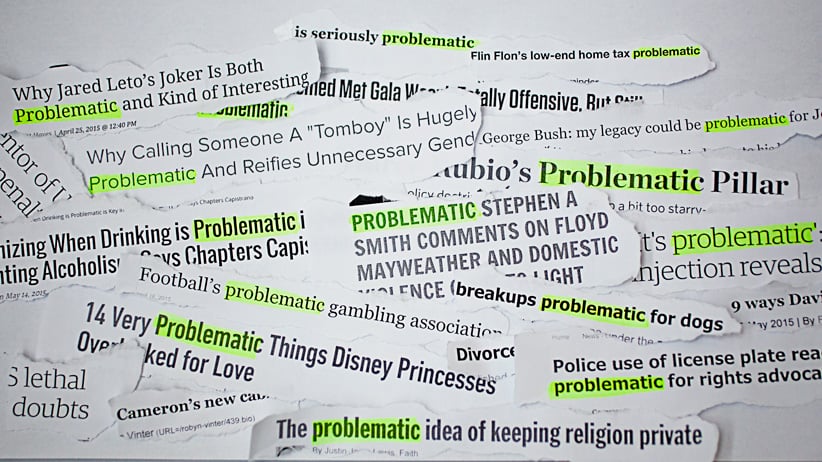 The word “problematic” has become problematic. 2015 may go down as the year when there was a backlash against how much this term was being used, particularly in online writing. Comedian Patton Oswalt’s 53-part Twitter essay (yes, 53 parts) against politically correct comedy included the line “parts 28 through 36 will simply be the word ‘problematic.’ ” And the conservative tumblr Everything’s a Problem! ranks Internet outrage targets on a scale of one to four Problematics. Even Buzzfeed, a site that has done much to popularize the word — with listicles such as “10 Extremely Problematic Realities about Latinos in Hollywood” and “The 24 Most Problematic Girlfriends in Popular Music” — ran a self-parodic article this year called “20 Things That Are Highly Problematic.” It’s a sign of how, in the online era, a word can suddenly go from obscure jargon to overused cliché and back again. But where did “problematic” come from, and why did it turn into such a, well, problem?

Before getting to that, let’s look at what “problematic” means when we say it these days. It’s currently used as an adjective to describe something that in some way—through its meaning, or the unstated assumptions behind it—reinforces unjust beliefs or an unfair system. In other words, “problematic” is an umbrella term meaning anything that is part of the problem, not part of the solution. It doesn’t always mean racist or sexist, though it certainly can. But mostly it means something that helps perpetuate racism or sexism.

Here are a couple of examples. The first one is the earliest I’ve seen, quoted in this 2014 piece on the history of the term.

As he steps into this arena to partake of its explanatory fruits he must necessarily step into its many academic bogs as well. Of this there can be no avoidance. This is because being Mexican-American alone does not dispel the problematic characteristics of social science research in general. In this light this issue of El Grito speaks directly to some of the problems that are to be encountered by Mexican-American social scientists in the production of objective and scholarly research on the Mexican-American.

The argument there is that social science, as a field, reflects certain biases against Mexican-Americans, and those biases (which will show up even in studies undertaken by Mexican-American social scientists) are what make the field “problematic.” It’s from 1970, but that’s how the word is still used today: to shift the conversation from individual fault to structural bias. The writer isn’t calling social scientists racists; he’s saying that there are “problematic” aspects to the research they produce.

Now, jumping forward to our time, the popular video game review series Tropes vs. Women (which points out “problematic” tropes in video games and suggests how they could tell their stories better) has a disclaimer explaining that the reviews are not condemning the games or the people who enjoy them. It includes this sentence:

This series will include critical analysis of many beloved games and characters, but remember that it is both possible (and even necessary) to simultaneously enjoy media while also being critical of it’s [sic] more problematic or pernicious aspects.

So that’s how we hear it now, but the operative word is now. We weren’t hearing it much in the ’00s. The Urban Dictionary, a cynical, lewd but useful guide to when people became aware enough of certain terms to start posting about them, didn’t have an entry for this definition of “problematic” until May 18, 2011, when someone called it “A corporate-academic weasel word used mainly by people who sense that something may be oppressive, but don’t want to do any actual thinking about what the problem is or why it exists. Also frequently used in progressive political settings among White People of a Certain Education to avoid using herd-frightening words like ‘racist’ or ‘sexist.’ “ Google shows that interest in the term spiked around that time and has been going up ever since. And in the New York Times, uses of the word were rare before 1970, and have become incredibly frequent since 2010.

So how did a word that was mostly used in academic journals and left-wing newsletters become part of the mainstream language? The date on that first quote I mentioned, 1970, may offer a clue. What we may be seeing here, in microcosm, is what happened to a word when the 1960s left became the establishment, particularly at universities. As time goes on, there are more professors, writers, and thinkers who use the term every day, and more students who pick up this formulation.

One of the places where “problematic” is most popular, apart from the Buzzfeed-style think piece, is Tumblr. And part of the significance of Tumblr is that it has helped import academic jargon into the mainstream. Terms like “erase” (to refer to downplaying or forgetting about non-whiteness or non-white people) or “male gaze,” which used to be mostly academic terms, are now routinely used outside the classroom. There used to be a sense that the university and the so-called real world were separate, and that the words you used in your academic discussions or writing weren’t necessarily the words you’d use in a mainstream forum – you’d say the same things, of course, but you’d use words that were more familiar to the mainstream. In our fragmented era, it’s more acceptable to write for a niche audience that understands the nuances of the terms you’re using. But the Internet has a way of taking niche words to people who might never have used them before, and integrating it into their conversation. So you have a term that goes from the universities to the Internet to the real world.

Now, why is this such a popular word to use? The main reason, I think, is that it’s vague enough to be gentle and not hurt anyone’s feeelings. Saying “problematic” is meant to avoid more loaded terms like racist or sexist or homophobic or colonialist. The advantage of this is that when you use those more specific, negative terms, someone is going to take offence, and the whole discussion will devolve into an argument about what constitutes racism or sexism, who gets to define, it, and so on. With “problematic,” you’re avoiding this explosion, avoiding the implication that it’s anyone’s fault in particular, and not even getting too deep into what kind of problem it is.

The point is simply that someone could have a problem, or it reflects old-fashioned views and biases; this is much easier for more people to agree with. Say that it’s sexist for a story to portray a woman as a damsel in distress, and everyone will have their own opinion on how sexist it is in the context of the story. Say that it’s “problematic” for Black Widow to get captured in Avengers: Age of Ultron, and it’s hard to argue that it reinforces a “problematic” trope, without having to worry about whether it’s a particularly bad or unjustified version of that trope.

The, er, problem is that when “nice” words are used to cover contentious subjects, they eventually take on not-so-nice connotations themselves. (You may recall that many insulting terms for the mentally ill actually started as ways of avoiding insults, and were turned into insults once enough people were able to say them with a sneer.) So “problematic” is now on its way to becoming almost as contentious an accusation as the words it was meant to replace; if you say “problematic,” people will still argue with you and take it personally.

And because anything can be problematic, writers feel comfortable using it without trying too hard to justify it. This can be particularly common in art, where the use of a trope is sometimes justified on an individual basis even if it reinforces old stereotypes: calling it “problematic” sometimes seems like a way of sidestepping the question of whether it’s well used, or whether it should have been avoided. The p-word was supposed to make discussions more civil by avoiding accusations of bad intent. But it sometimes comes off as a way of dodging the hard work of making a judgment: the writer comes off as not having enough conviction to use a harsher word, not being willing to say outright that something is or isn’t acceptable.

But the very fact that one word can stand in for so many different types of problems can make it a word that’s open to overuse. This much-discussed article from the McGill Daily, about the writer’s experience of letting campus activism become too big a part of her life, included the line: “An activist friend once said to me, with complete sincerity, ‘Everything is problematic.’ That was the general consensus.” That’s because that’s probably true: everything is problematic in some way, because everything is encoded with the assumptions and biases of our society. But to paraphrase The Incredibles, when everything’s problematic, then nothing is.