The problem with the badass-working-parent meme

Viral photos of politicians and CEOs working with their babies on their laps are meant to inspire. In reality, they're absurd and unhelpful for real working parents. 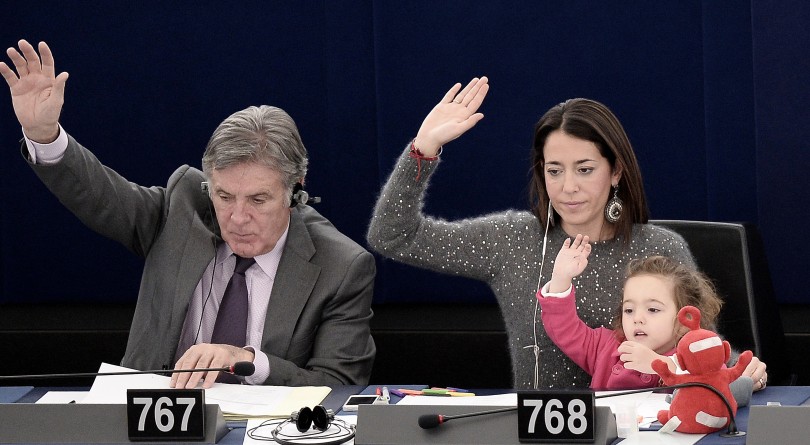 Italy's Member of the European Parliament Licia Ronzulli (C) takes part with her daughter Victoria in a vote during a plenary session of the European parliament in Strasbourg, eastern France. (Frederick Florin/AFP/Getty Images)

A couple of months ago, a friend and former colleague asked if I would speak to a journalism class she was teaching. I was on maternity leave at the time and her request was last-minute, so I told her I’d be happy to, but would have to bring my seven-month-old with me. She replied, “Squeals of delight when I told the class he will be coming! So now you have to bring him.”

And so I ended up standing in front of her class with a baby and a heap of toys parked on a blanket at my feet while I attempted to arrange my thoughts into adult sentences about what I usually do all day. When I introduced myself and my small, round friend, there was the requisite cooing, but then I did my best to benignly ignore him and hoped everyone else would do the same.

It wasn’t easy. My son had only recently mastered sitting up, so I kept glancing down to make sure he wasn’t about to topple over like a Weeble and thump his head on the floor. About halfway through my hour-long session, he got restless, so I picked him up and perched him on my hip. After another little bit, he decided he was bored with the new vantage point and began to keen like a dog that wants in the house. So, without pausing in my yammering, I unwrapped a package of Mum-Mums and offered them to him, trying to ignore the damp crumbs accumulating on my clothes.

My son was as well-behaved as a baby could be for a boring, quiet hour. But even immediately after I finished, I had zero recollection of what I said to that class. I’m sure I didn’t answer their questions particularly well, because half my brain was preoccupied by a small being that might have blown his stack at any moment, in one of several different ways.

It’s like talking to one person while surreptitiously listening to another conversation behind you: you might be able to fake your way through, but chances are the person you’re talking to is getting a lot of vacant “Uh huh, uh huh, interesting!” from you. Afterward, I felt proud of myself, like some come-to-life working-parenthood meme, but the accomplishment was doing many things at once, not doing any of them especially well.

READ MORE: Mothers who regret having children are speaking up like never before

That’s why when one of those viral photos makes the rounds periodically, showing a politician or executive cradling their baby in a house of parliament or at the head of a boardroom table, I always cringe a bit.

As a working parent and someone who cares a lot about seeing women treated with more equality and given room to achieve bigger things, I think I’m supposed to cheer, re-tweet and offer a virtual fist-bump to my fellow avatars of Having It All.

But that’s not my reaction. All I can think when I see one of those photos is, “There is no way that woman can really concentrate with that baby parked on her lap, and I bet this is a crappy day at work for her.”

Babies are fantastic. I like babies so much that I’ve had two of them, in fact (alternate rage-machine headline for this column: “MOTHER OF TWO HATES BABIES”). But babies are incompatible with pretty much everything you need to work well and with minimal stress: concentration, predictable demands on your time, space to think, the simple ability to set aside your home-self so you can be your work-self.

Those babies-in-boardrooms images and their inevitable “Woo hoo, lean in!” commentary are totally counterproductive to advocating in any real way on behalf of working parents. (I’m pretending for the moment that we apply these wonky assumptions and expectations equally to men and women who are parents, which is frankly hilarious and insane, but let’s just go with it for now.)

I would argue strenuously that working parents can be just as productive, valuable and engaged as their counterparts without kids—but we can’t do any of that while we’re parenting. Pretending that we can or should is absurd and unhelpful. Super-Parent memes imply that’s the standard against which we should all measure ourselves, and that just makes me want to curl up under my desk and take a week-long nap, at which point I would lose both my job and my family.

There are weird circumstances that arise, of course, and you’re proud when you pull it off somehow, like I did in that j-school class. This is why “BBC dad” remains one of the most delightful and relatable things the Internet has coughed up in the last five years: seriously, there but for the grace of God go many of us.

I know someone who was dialed into a government press conference in his car when his toddler began loudly demanding Baby Beluga—at which point my friend realized his phone was not, in fact, muted. There’s even suggestion that female politicians now see value in deliberately highlighting their motherhood and other life experience in their ads.

But these moments of furiously spinning all our plates in the air at once need to be the rare exception rather than the rule. That’s the problem with the badass-working-parent image: the implication is, “See? She can do it all, and she’s not whining about parental leave or daycare space or missing work because her kid has pink eye. Everything is fine!”

There’s also the screamingly obvious fact that you’re never going to see a viral photo of a parent working a drive-thru window or mopping a floor with their infant strapped into a carrier, surrounded by co-workers and a shift manager smiling indulgently. This insistently cheery, can-do version of working parenthood is something that is only available to some, while the issues that underly it are problems for all.

And then, of course, there’s the fact that I have willfully ignored to this point: these memes always, always—always—feature moms. Did you know that no human babies on earth have involved fathers who also have jobs and sometimes have to juggle both parts of their lives, and that’s why child care is a boutique “women’s issue”? No, it’s completely true, society told me! The babies-at-work thing is a variation on asking high-powered women how they “juggle it all,” or all the commercials that still somehow, in this, the year of our Lord 2018, act like all things home- and child-related are ruled by a shrewish but efficient woman and her idiot man-child underling. It’s yet another way we still insist that women belong to the domestic, only now we expect them to perform at the office too, and take their kids along with them to pose for a cute photo while they’re at it.

Here’s the meme I would actually cheer for; it’s in comic-strip format rather than a single image. In one frame you see a woman at work—she’s unencumbered, talking with her colleagues, firing on all cylinders, fully engaged. In the next frame, we see why she and her partner can be so absorbed and productive at work: after staying at home for a humane amount of paid parental leave, there’s their kid, in an affordable, reliable, happy daycare spot that they did not have to languish on a waiting list for an anxious eternity to land.

And in the last frame, they all reunite at home, where the parents can put away their phones, their email and their work-selves at once, flipping the switch to become that other version of themselves for the evening, all about their family. They happily let the rest of their spinning plates come crashing to the ground, knowing none of it is breakable and they can pick it all up again the next morning. That is the kind of having it all I aspire to and will RT the hell out of.

In the meantime, if you see one of those super-parent memes out in the real world, please: offer to hold their baby for a bit while they do what they need to do. A package of Mum-Mums will probably help.