After Cpl. Cirillo's death, Queen Elizabeth II wrote to the Argyll and Sutherland Highlanders. Now, she's met with members of the Hamilton regiment 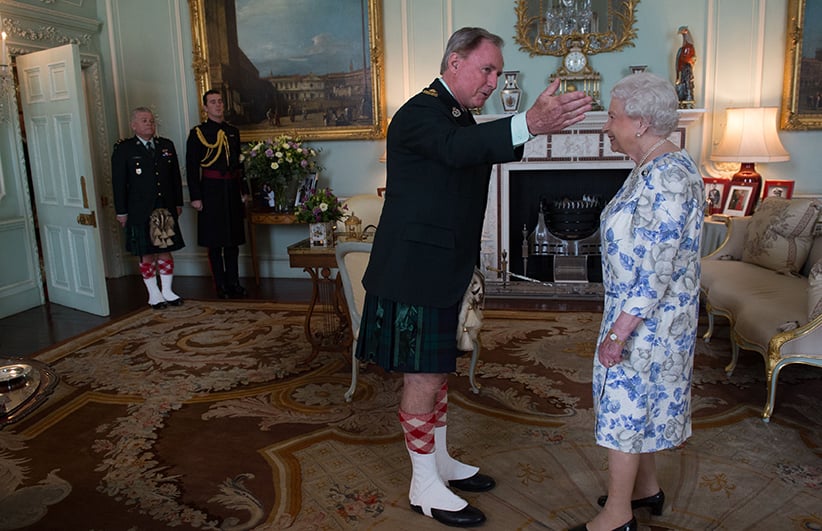 Queen Elizabeth II, in her capacity as Colonel-in-Chief of the Argyll and Sutherland Highlanders of Canada, receives Colonel Ronald Foxcroft (Honorary Colonel) at Buckingham Palace in London. (Stefan Rousseau/PA)

The audience may have been with Queen Elizabeth II, but it was also very much a regimental affair for officers of the Argyll and Sutherland Highlanders of Canada (Princess Louise’s). For Her Majesty isn’t only Queen of Canada, she’s also been the Hamilton-based regiment’s colonel-in-chief since 1952, and stays informed as to its activities. As Col. Ron Foxcroft, the reserve regiment’s honorary colonel, told the Hamilton Spectator, “She’s very proud to be the colonel-in-chief of the Argylls. She refers to the Argylls as ‘my regiment.’ ”

However welcome, the afternoon meeting in Buckingham Palace was also bittersweet. Seven months ago, one of the Argylls’ own, Cpl. Nathan Cirillo, was killed while standing guard at the National War Memorial in Ottawa. The gregarious 24-year-old, a single father of five-year-old Marcus, was serving as part of the ceremonial National Sentry Program with his friend, Cpl. Branden Stevenson. They were standing at attention, wearing the regiment’s distinctive full-dress uniform—including its kilt and black horsehair sporran fronted by white goat-hair tassels in the unique “swinging six” arrangement—when Michael Zehaf-Bibeau shot Cirillo twice in the back. While civilians ran to help the fatally wounded soldier, the gunman left to attack Parliament Hill before being killed himself.

Related: An oral history of Ottawa’s dark day on Oct. 22

During the outpouring of grief in the autumn, the Queen sent her “deepest sympathies” to Cirillo’s family, as well as to the regiment he loved. It was the first letter the regiment received. Since then, her office has frequently been in touch with the regiment, Foxcroft said. Now, the Queen wanted to offer her respects in person.

On May 19, in the ornately gilded audience room in her private apartment, the Queen met the regiment’s commanding officer, Lt.-Col. Lawrence Hatfield, as well as Foxcroft and its honorary lieutenant colonel, Lt.-Col. Rick Kennedy. In addition to talking about Nathan Cirillo, they also updated the Queen on regimental news, including its latest battle honour for service in Afghanistan.

The men presented the Queen with a wall hanging in memory of the 1,660 members of the regiment “killed in service of their sovereign and country.” It features a poppy made of dozens of Fox 40 whistles, made in Hamilton and developed by Foxcroft. The piercing sound made by the whistle, popular with police and sports teams, may turn out to be just the thing to get rid of the visitors from her northern realm that are creating a nuisance in the carefully maintained gardens of Buckingham Palace: Canada geese.