The real lesson from Uber: Don't be a jerk

Emma Teitel on what happens when a business rates its customers 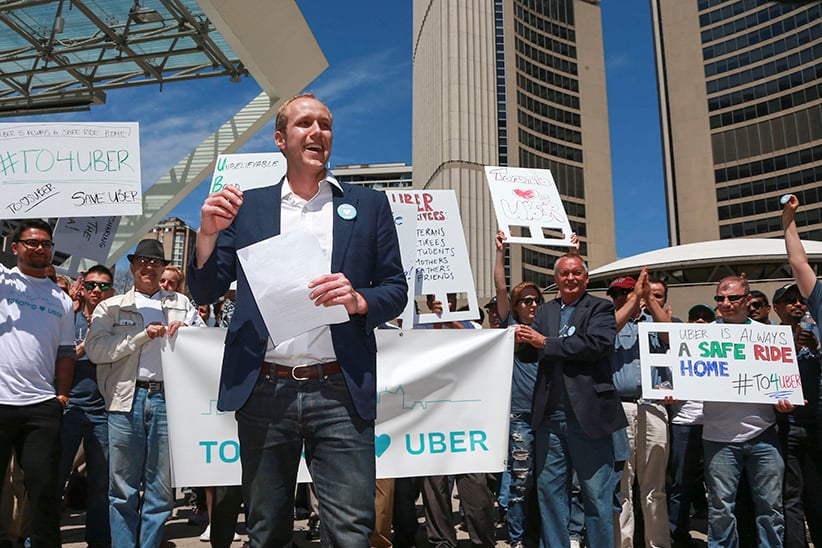 If you are not a customer of Uber, the hugely popular, inexpensive ride-booking service (also a permanent thorn in the side of conventional cab companies everywhere), you may be under the impression that the start-up’s success is a precursor to the End of Days. And who could blame you? Fear-mongering about UberX—the company’s service that pairs riders with unlicensed drivers—is a favourite hobby among competition-wary cab companies and the politicians in their corner. Anti-Uber Toronto Councillor Jim Karygiannis warned in July that “under Ontario’s Highway Traffic Act (OHTA), a person who arranges for a ride in an unlicensed taxi” could be fined up to $20,000. Critics of the councillor were quick to point out that the OHTA does not apply to passengers. But anti-Uber rhetoric bends toward error and hyperbole.

For example, while it is wholly true and horrible that UberX drivers have been charged with sexually assaulting customers, a belief persists—usually among people who have never used UberX—that the ride-booking service poses a unique danger to women. The problem is, everything poses a unique danger to women: going out at night, not going out at night, taking conventional cabs (in which women are assaulted every year), etc. If women seriously decided to stop doing things that posed a unique danger to their gender, they wouldn’t do very much at all. But that’s a conversation for another column.

Uber is not perfect. But I use the service anyway, because I live in Toronto, where cabs cost a small fortune and public transit is practically prehistoric. If you don’t believe me, try taking a Toronto streetcar to work in the dead of winter when it malfunctions mid-traffic, forcing the driver to step outside and revive the thing with a gigantic wrench. (As beloved relic-hunter Indiana Jones liked to say: “It belongs in a museum!”)

So, at the risk of sounding like a corporate shill, I will admit that UberX has made my life immensely more convenient. But with that convenience has come an unexpected, newfound insecurity—because, while UberX offers customers cheaper fares and freebies (water bottles, granola bars), it also operates on a rare rating system. Not only do customers rate their drivers—on a one-to-five star system—but drivers rate customers, too. And if a customer’s rating gets too low, he or she can be banned from the service entirely. I recently contacted Uber’s customer service department and learned that my own rating sits at 4.4 out of five, which I assumed was respectable, until one of my UberX drivers hinted otherwise.“ Only a 4.4?” he said. Only 4.4? Cue the self-doubt: Had I paid too much attention to my phone, too little to the driver? Had I been short? Tired? Distracted? I vowed to be a better customer.

Related: Why Montreal is hellbent on ending Uber

It seems that lost in the larger question about the legality of the ride-booking economy is another smaller, sociological one: What happens when a business rates its customers? And, to put it in high school terms, is UberX an easy marker, or a hard one? Based on a series of conversations I’ve had with UberX drivers this past week (who, full disclosure, drove me around the city), I’d say UberX leans towards the former: Drivers, in Toronto, at least, appear very generous. Twenty-one-year-old UberX driver Uttam Singh, a Humber College graduate who also works at Subway, says he gives almost everyone a five-star rating.

“I’ve had bad customers—both were drunk,” says Singh. “They were very rude, they [gave me] the wrong address.” In my research, the most common criticism about Uber passengers by UberX drivers is not drunkenness, as you might think, but rudeness: passengers who input the wrong information and expect drivers to correct their mistakes, passengers who request multiple stops, then complain about their fares—and passengers who don’t know where they’d like to go, but are too busy playing on their smartphones to instruct their drivers. “You can’t expect me to be looking at my app and driving at the same time,” says one UberX driver who declined to be named. She says some passengers expect drivers to keep their eyes glued to their GPS screens, tracking the route. Another driver, a part-time realtor in his 50s who would not give his name, says an inebriated customer insisted on paying in cash, despite the fact that UberX operates strictly on credit-card billing. But the driver gave the drunk guy a high rating anyway—because “he was nice.” As for the sober customer who was too busy texting to lead the driver on the very complicated, alternative route she desired? “I gave her a three,” he says. Be drunk, maybe, but don’t be a jerk.

Uber may be an unregulated menace that profits from a culture of precarious employment, but it also provides a public service we didn’t even know we needed. It conveys in simple, quantifiable terms one of life’s most important, yet frequently ignored, lessons: It never pays to be rude.