The science and psychology of The Wave

When it works, the wave is a glorious thing. (It doesn’t always work.) 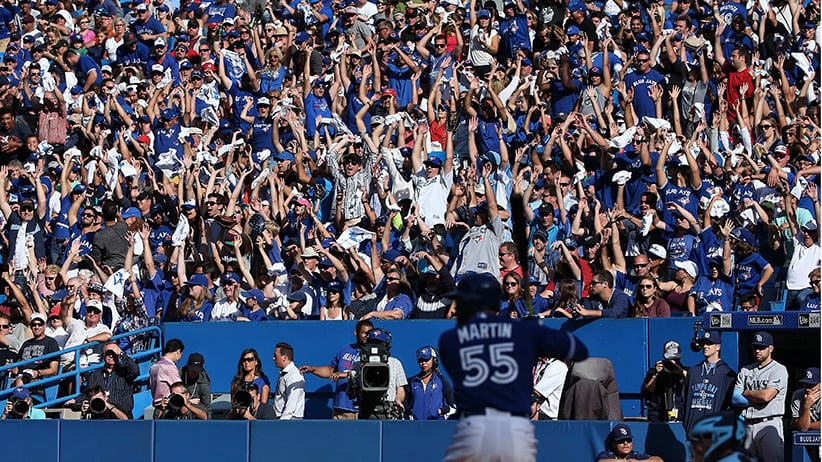 Fans do the wave as Russell Martin #55 of the Toronto Blue Jays bats during MLB game action against the Tampa Bay Rays on September 26, 2015 at Rogers Centre. (Tom Szczerbowski/Getty Images)

It’s early September and several hundred baseball fans are packed inside a Toronto community centre to drink beer and listen to sports journalists talk Toronto Blue Jays baseball. At $25 a seat, the Pitch Talks event costs more than some Jays game tickets. But the team has a day off, so what else are the diehards supposed to do?

Halfway through the event—after panellists have discussed the most nuanced of topics like the movement on a Marco Estrada fastball or the likelihood of the Rogers Centre getting grass to replace the turf—the moderator has an ask. They’d like to take a photo of everyone doing the wave. The request is met with a chorus of boos.

Hardcore baseball fans have no time for the wave. For them, it has long been an unworthy distraction from the real action worth cheering: what’s happening on the baseball diamond.

“What drives me nuts is the guy who thinks this is a way to fire a team up—as if [the players] are Hulk Hogan and will respond to the crowd and get their strength back,” says Andrew Stoeten, editor of the popular Jays blog Blue Jays Nation. “And the process of starting the wave is an even bigger nuisance than the wave itself because you have people standing up and shouting in front of people trying to watch the game.”

George Henderson is a professional cheerleader by trade, and widely considered to have invented the wave in 1981. Getting tens of thousands of people in a group cheer is no easy feat, and Henderson has a few tricks. For starters, he’s sure to stand in a curved part of the stadium, where fans from the side can see the wave coming. Next, he waits for the action on the field to stop so fans can focus on him. Then he preps the nearest group about when the wave is starting and the direction it will travel. Lastly, if fans several sections over don’t take part, he encourages others to boo them.

If Henderson doesn’t have the wave down to an exact science, a group of researchers in Hungary certainly does. By analyzing patterns of human waves at soccer stadiums, they found three-quarters of waves run clockwise, and that waves travel at a rate of 22 seats per second with a typical wave width of approximately 15 seats.

Why on earth would anyone study the wave in such detail? “Basically just for fun,” says Illes Farkas, a physicist at the Hungarian Academy of Sciences in Budapest. “And then it turned out to be very interesting.”

Starting the wave, for example, requires the right mood of the audience. If they’re too bored or too excited, they won’t take part. But when the atmosphere is just right, a group of about 30 people starting the wave is enough to get 50,000-plus fans out of their seats with their hands in the air.

Related: The fine art of heckling

What constitutes the perfect mood, however, is subject to interpretation. But as a former Youppi! mascot performer with the Montreal Expos explains: “You don’t do the wave in the first inning. People aren’t drunk enough,” Jean-Claude Tremblay told Maclean’s. “Not drunk on alcohol, drunk on baseball.”

“You don’t see the wave too often outside of Toronto,” says Gregg Zaun, a 16-year Major League Baseball veteran turned TV Sportsnet analyst. “They seem to love to do it here and I don’t understand why.” Possibly that’s because, for the better part of two decades, Blue Jays fans didn’t have a lot to cheer for. The wave offered a distracting reason for fans to get out of their seats.

Zaun doesn’t have a problem with the wave if the Jays are losing by seven runs, but “it tells me what your baseball IQ is when you’re in the stands in a one-run game, your home team is scratching and clawing, and you’re in the stands trying to do the wave,” says Zaun. “To me, it’s disrespectful.”

But what about the roar of the crowd piercing through the stadium? Doesn’t that fire up the players? In short: no. “If I’m playing the game and I’m looking at fans doing the wave, they’re telling me they’re not entertained,” says Zaun. “All I hear is Maximus from [the movie] Gladiator: ‘Are you not entertained?!’ ”