The Shafia case is finished—finally 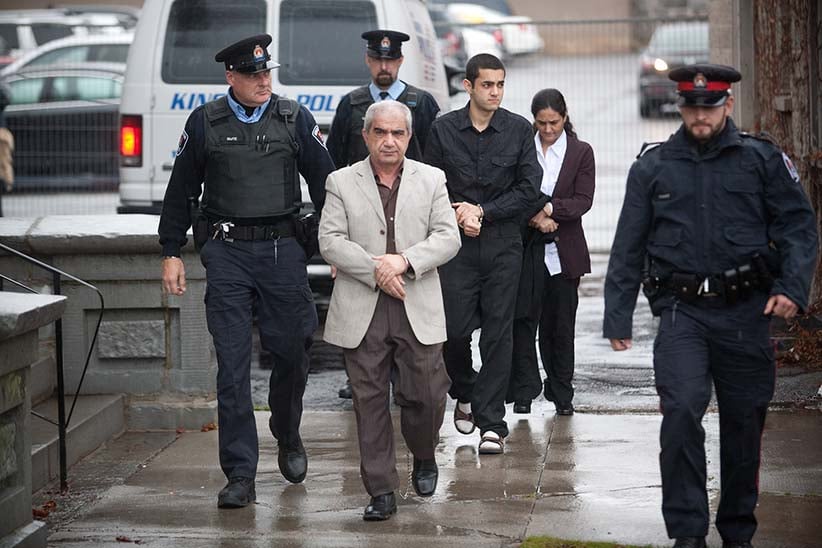 Mohammad Shafia (l), eldest son Hamed and Tooba Mohammad Yahya ( back) on their way into court in 2011. (Photograph by Vincenzo D’Alto)

Eight years ago this weekend, a woman named Zainab Shafia worked up the nerve to make her escape. She was 19, plenty old enough to lead her own life, but she’d been trapped for months in a father-imposed house arrest, unable to leave the family’s Montreal home without a relative by her side. Her infraction? Being caught with a boyfriend.

Her 18-year-old brother, Hamed (who discovered Zainab with said boyfriend, and promptly alerted their homicidal dad) was also the one who came home to find her missing that April afternoon in 2009. He immediately phoned 911 to report his sister’s disappearance. Again, Zainab was 19—not nine.

“She stay at home usually(sic),” Hamed told the dispatcher. “She left a note and, uh, she’s nowhere to be found… the note says that she won’t be returning anymore.” The person on the other end of the line asked for more details about her letter. “She said like: ‘I would like to live my own life,’ ” Hamed mumbled. “That’s all she left.”

A few minutes later—expecting a police cruiser to arrive, sirens blaring—Hamed dialed 911 again. “They didn’t come yet,” he said.

In hindsight, Zainab’s fate was sealed that day. Her father, Mohammad Shafia, was already livid about her secret boyfriend—and the supposed damage it had done to his reputation in Quebec’s Afghan community. But her decision to flee to a women’s shelter would be the final straw. In order restore the family’s tarnished honour, she would have to die.

Ten weeks later, police in Kingston, Ont. would find Zainab’s body stuffed inside a submerged Nissan at the bottom of a Rideau Canal lock station. Two of her sisters, 17-year-old Sahar and 13-year-old Geeti—fellow “whores,” according to their father’s wiretapped words—were also in the car, alongside Rona Amir Mohammad, Shafia’s first and infertile wife in their secretly polygamous clan. What started out as a plan to murder one family member quickly ballooned into a quadruple-murder plot, orchestrated by mother, father and eldest son.

The trial that followed captivated the country like few ever have. Canadians were horrified that a mother and father could contemplate the murder of three of their daughters—let alone pull it off, with the help of another child. And as the court heard gruesome details day after day, Muslim leaders felt compelled to respond to the headlines, insisting that the Shafias’ barbaric behaviour was the exception in their faith, not the norm. Quebec’s child welfare agencies endured even more scrutiny, accused by many of failing to protect the girls amid so many dire warning signs.

On Thursday, the legal odyssey that followed finally came to an end, with the Supreme Court refusing to hear a last-ditch appeal from Hamed—who now claims he was 17 at the time of the murders, not 18 as originally believed, and therefore should have enjoyed all the inherent protections afforded a young offender. As usual, the high court gave no reasons for refusing to hear his appeal, but the inference is pretty clear: like every lame defence mounted by the Shafias, this last one was borderline laughable.

Simply put, Hamed claimed that one of his father’s employees in their native Afghanistan recently stumbled upon some identity documents that suggested he was born in 1991, not 1990. If true, Hamed would have been 17 when he helped kill his four relatives, making him a teenager, not an adult. It would also mean that three of his younger siblings are one year younger, and that their mom and dad had somehow been wrong all this time about their true ages.

To be fair, it wasn’t the most ludicrous claim the family ever made. In one police wiretap, Mohammad Shafia famously said of his dead daughters: “May the devil s— on their graves!” When asked at trial, under oath, what he meant by that remark, Shafia responded: “To me, it means the devil would go out and check with them in their graves. If they have done a good thing, it would be good. If they did bad, it will be up to God what to do.”

Sentenced to life in prison with no chance of parole for 25 years, all three killers will now do the time—no more appeals pending. If one of them ever does get out of prison, they will surely be on the first flight out of the country. They weren’t here quite long enough to obtain the honour of Canadian citizenship.