Playing on instruments of ice to padded, gloved applause

When musicians improvise with ice instruments alfresco, anything can happen 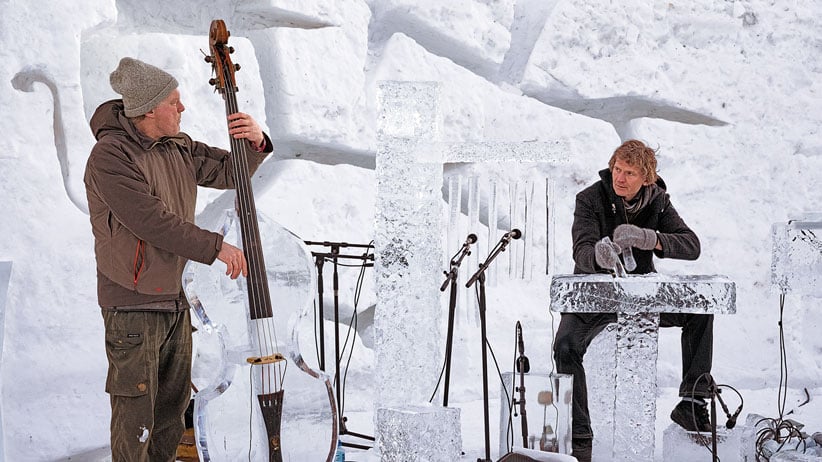 Under a frosty full moon, it took two hours in -20° C for ice sculptor Bill Covitz to put a scroll made of ice on a snow bass nearly eight metres tall. Nervous volunteers hovered around Covitz, who stood high up on a buzzing crane a day before the opening of the Ice Music Festival in Geilo, Norway, crowning the delicate centrepiece on a sacred snow stage. Geilo is the centre of the genre known as “ice music,” which celebrated its 10th anniversary this month, and artists (mostly improv jazz musicians) had flown in from France, Austria, Sweden and the U.S. to play instruments made of ice in below-zero weather, to padded, gloved applause from music lovers.

Ice instruments are built using a sander, chainsaws, chisels and knives—or, in the case of the ice udu, an African aerophone, by filling balloons with water, freezing them, then slicing away the plastic. There are iceofons (xylophones made of ice), ice guitars and ice horns. Aside from the double bass, instruments making their debut this year included the ice bucket drum (made from a half-hollow ice drum filled with crushed ice) and the ice balafon.

But the instrument of the year was that bass, which sounded like a gentler version of its wooden sister. The volunteer team of instrument-builders who work under Covitz bought an old broken double bass via a newspaper ad. They ripped out the body, leaving the neck and strings dangling, and placed it in a Plexiglas cross, then inserted that in a mammoth carved block of ice. “It works, it works!” said Swedish bassist Anders Jormin. A jazz musician, he had never played an ice bass. “The question is,” he said, “how close to an instrument does this ice bass become? Can I play normal pitched notes? Which strings work better with ice?”

Ice music began in 1999 when Norwegian percussionist Terje Isungset was commissioned to stage a concert in a frozen waterfall for the Winter Festival in Lillehammer. He used local materials, including stones, wood and ice. From there, he began exploring ice as an acoustic material. He has released 10 albums since; his newest is Meditations, five tracks of which were recorded in Iqaluit in front of the old Hudson Bay buildings, in -38°C weather. “The ravens came while I was playing an ice horn; we had a conversation,” said Isungset, who performs in Iqaluit on March 7 and 8.

Founded by Isungset, the Ice Music Festival is held every first full moon of the year in this ski town. “The festival is completely decided by nature,” he said. The ice-made neck of the bass could break at any moment if the weather warms up. “When it happens is different every year,” Isungset said. “The quality of the ice is decided by how it freezes, and it sounds different from year to year. If there is a storm tomorrow, the sound will for sure be different.” Manufactured ice has a flat sound, so the ice is sourced from nearby lakes, fjords or oceans—cut out with a chainsaw and pulled with large pliers in an “ice evacuation.” If the ice has any cracks or bubbles, it destroys the vibration of the sound, so it must be crystal-clear. “The instruments are actually water,” Isungset explained. “They’re just a little bit cold.”

At this year’s opening concert, Sigurd Rotvik Tunestveit performed the piece Meltwater. The tone was spooky and experimental, with many gaps of silence and hushing wind. Each of the ice instruments had a microphone stuck to it with a drop of water. “The challenge with ice is that you can’t write music,” said Tunestveit, a jazz improv vocalist. “You can only create a mindset, add cues and a framework. You get what you get.”

The following night, 400 people packed into the bandstands. Heavy gusts of wind almost blew the instruments off the stage. Instruments exploded toward the end of the last set—the ice udus shattered like wine glasses; the drumsticks fell apart. The slabs of the balafon sliced in half when struck too many times by Mamadou Diabate, a Vienna-based musician from Burkina Faso. The audience gasped, or burst into laughter.

After the festival, Jormin, the bassist, was departing from the Geilo train station. The ice bass was one of the few instruments that didn’t fall apart. Playing it, he said, was completely unique. “Almost a different instrument,” he noted. “It was a big joy, even though my fingers almost fell off.”