The heir-raising problem of the royals' spare tires

An heir and a spare. This is the minimum reproductive requirement of any high-ranking royal marriage. The Queen and Prince Philip did their bit, as did Prince Charles and Diana and, now, the duke and duchess of Cambridge are well on their way to fulfilling the royal reproduction writ, as well. But the Cambridges might consider the future of their second child. Because, while royal life is well-circumscribed for the heirs—a plodding ceremonial march toward the throne and death—things are rather different for the spares.

In this brave new era of budget-conscious, pragmatic royals, the spares pose a big problem. They are living insurance policies, but, apart from that, what is the point of them? This is the unspoken question that Buckingham Palace officials will likely be asking themselves as Andrew, the “spare” of his generation, is engulfed in what is shaping up to be the biggest royal sex scandal since his then-wife, Sarah Ferguson, the duchess of York, was photographed having her toe sucked by a bald Texan millionaire.

Last week, the royal family embarked on what may turn out to be another annus horribilis when tabloids blazed into 2015 with headlines like “Prince Andrew’s underage sex slave.” The accusations came from a woman the Mail on Sunday identified as Virginia Roberts, now a 27-year-old mother of three living in Australia, who claims that when she was 17, she was sold as a sexual companion to the prince for US$15,000 by the American financier Jeffrey Epstein. According to papers filed in a Florida court, Roberts had sex with Prince Andrew on three occasions.

Last weekend, Buckingham Palace broke its characteristic silence on such matters and released not one, but two statements vehemently refuting Roberts’s story as “categorically untrue.” Although the Prince has not directly commented, he did cut short his Swiss skiing holiday to return to London last weekend.

While Andrew is not named in Roberts’s suit, he has been named in the evidence relating to a larger sex trafficking scheme involving Epstein. If the case proceeds, the prince may well be called upon to give testimony about his friendship with Epstein, with whom he was photographed walking in Central Park as recently as 2011. Another photograph of the prince being widely circulated online features the royal with his arm around a young woman identified as Roberts. 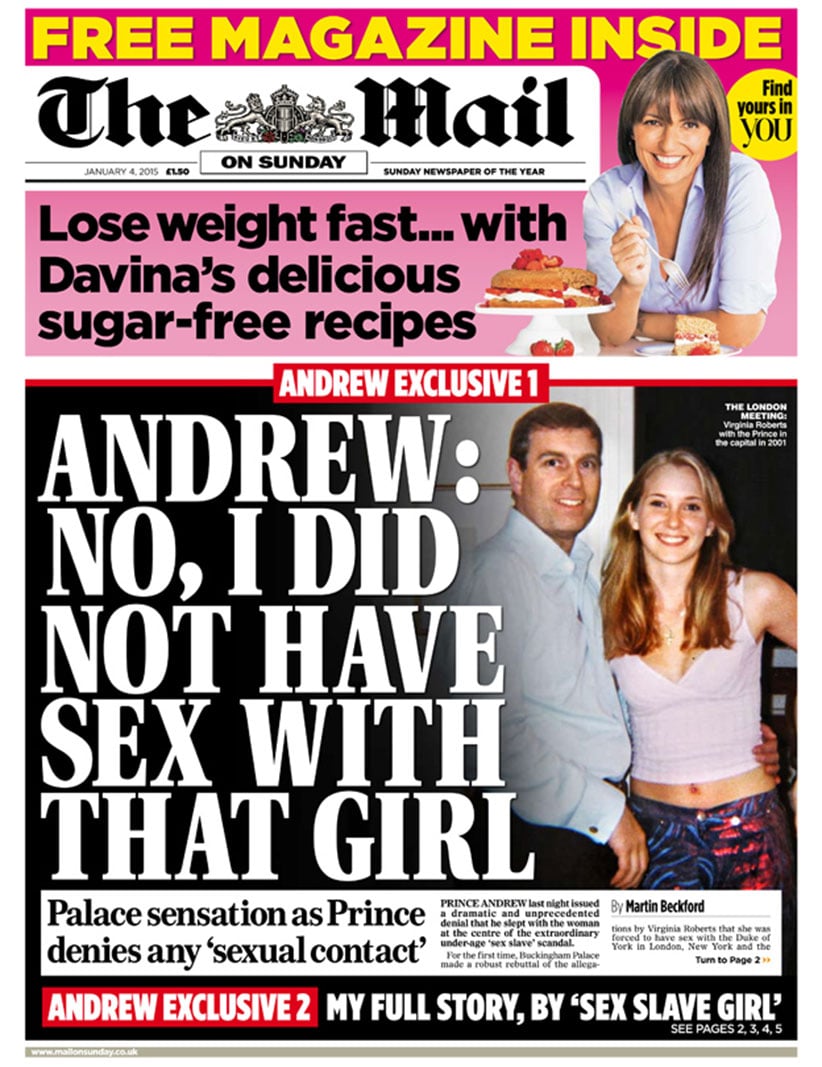 The scandal is hardly the first for the beleaguered prince, who has struggled for many years to find a suitable role after retiring from active duty in the navy in 2001. From 2001 to 2011, Andrew acted as the U.K.’s special representative for trade and investment, but resigned after enduring years of harsh criticism. His problems began when Ferguson was caught on camera peddling her influential relationship with her ex-husband to a fake sheik in a British tabloid sting operation in 2010. Then there was the problem of his relationship to Epstein, who was convicted for sex crimes the following year and is known to have gifted Sarah Ferguson $25,000 to help pay off her debts. Andrew was also criticized for holding private meetings with Moammar Gadhafi’s son. There were accusations of corruption when he sold his enormous Sunninghill Park residence for $7 million more than its $27-million asking price in 2007 to the son-in-law of the president of Kazakhstan. And there were his lavish travel expenses—paid for from the public purse—earning him the tabloid nickname “Air Miles Andy.”

At the time of Andrew’s resignation as U.K. trade envoy, Peter Hunt, the BBC’s royal correspondent, said “royal and government officials have been grappling with the challenge of what to do with the duke of York.” The same is certainly true today. As a salary-earning member of “the Firm” (he reportedly receives an annual stipend of US$408,000), Andrew is an awful liability. Like other second-born “spares”—Prince Harry and the late, party-loving Princess Margaret—Andrew is accustomed to a lavish lifestyle but pitifully ill-equipped to support it. That’s partly because of his royal status, which places him under great public scrutiny and, because, well, royal spares really aren’t bred to “work.”

The Queen has always stood firmly behind her second son. But one of the changes Charles is understood to be keen to effect once crowned king is the streamlining of the royal family—specifically, casting out minor “spare” members to fend for themselves without access to public funds or royal stipends. King Felipe VI of Spain recently did it to his scandal-plagued sisters and the public response has been overwhelmingly positive.

For the next few months, Andrew will likely be urged to keep a low profile. With a sex scandal just starting to heat up, however, it’s unlikely he’ll be able to do so. And so he will remain caught in the miserable limbo of being a spare: terribly important with nothing much useful to do.