The tragic story of a Canadian vaccine trailblazer

Maurice Brodie was the first person to develop a working polio vaccine. He was cast as a dashing young hero, and celebrated in the U.S., until it all came crashing down. 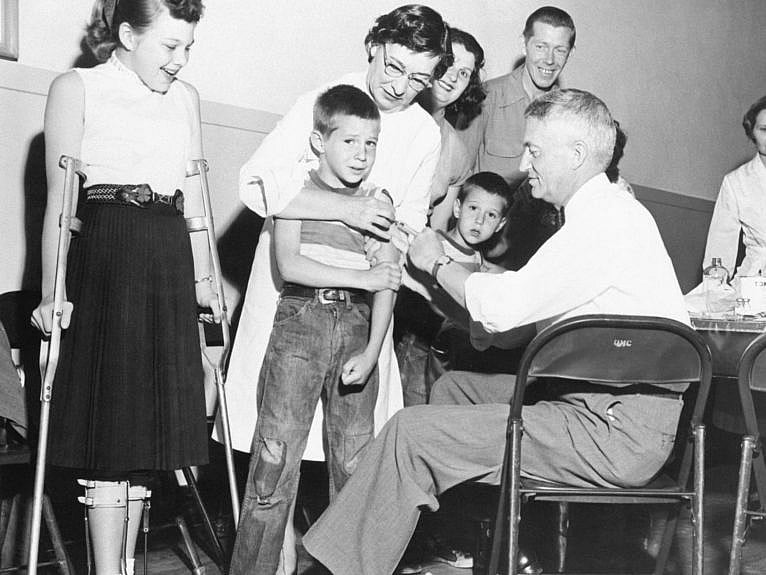 Shots of the Salk polio vaccine are given to children in the U.S. in 1954, decades after Brodie's first trials (Bettmann/Getty Images)

He was called a “savant” and a “savior,” thought a contender for a Nobel Prize and named alongside John Steinbeck as an American “genius whose work will live on through the centuries.” But he wasn’t American, he was Canadian, and by 1939—just four years after receiving international acclaim—his vaccine research was shuttered, he had been fired from a prestigious job at New York University and he was dead of a heart attack, though one former colleague called it a suicide.

Dr. Maurice Brodie was only 36.

Though little-known today, the story of the Ottawa-raised, McGill-educated researcher is a key one in the development of vaccine safety. It’s also a tragic study of ambition and altruism in a time of epidemic.

“He was the first to develop a polio vaccine that worked,” says Dr. Paul Offit, director of the Vaccine Education Center at Children’s Hospital of Philadelphia. “He did some things that were groundbreaking. It’s just that the technology wasn’t there” to mass-produce a reliable vaccine.

Others were more critical. Brodie had a “slapdash way of working,” wrote one scientist in 1935 after reviewing a paper documenting his vaccine trials. Brodie’s paper was never published.

In the 1930s, polio was coming to the fore of public consciousness. Outbreaks early in the decade created fears of a wider epidemic (which would hit Canada in 1937). U.S. President Franklin Roosevelt, a polio survivor, brought new visibility to the disease and his annual “Birthday Balls” provided funding for polio treatment and vaccine research, including Brodie’s.

“It was the growing threat,” says public-health historian Christopher Rutty, who teaches at the Dalla Lana School of Public Health at the University of Toronto. Vaccine science had recently bested diphtheria. “Polio was the outlier, it was the challenge, and it required investment.” 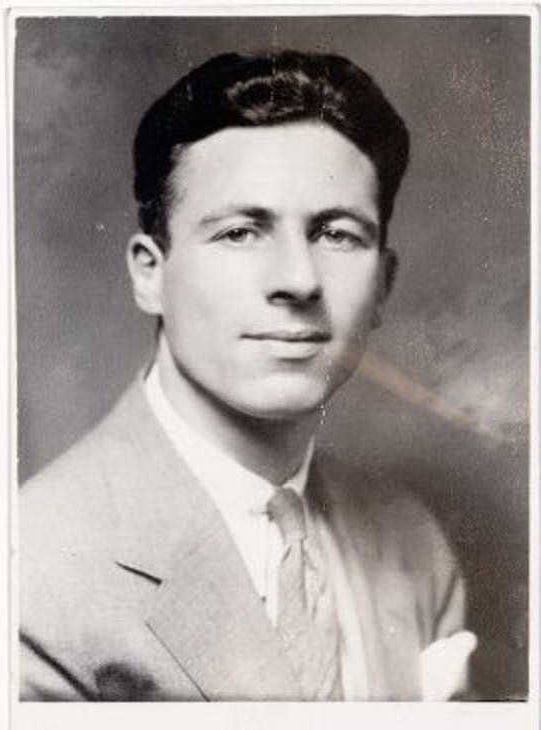 Maurice Brodie, 1932 (Courtesy of the National Library of Medicine)

After winning praise for his research with pediatrics pioneer Dr. Alton Goldbloom at McGill, Brodie was enticed to New York by FDR’s money, which could help pay for the hundreds of rhesus monkeys needed for research (Brodie called them “martyrs to science”). In New York, under the supervision of Dr. William H. Park, a veteran health researcher savvy about promoting his work in the media, Brodie spent his days harvesting the monkeys’ infected spinal cords in order to obtain enough virus material to produce a vaccine.

His singular innovation was to successfully use a chemical agent called formalin to inactivate the virus and use it to make a shot that induced antibodies. Formalin had already been used to kill the diphtheria toxin and create what is called a toxoid vaccine. But diphtheria is caused by a bacterium, not a virus like polio.

“It’s not a simple application of what happened with toxoid to a polio vaccine, it’s a whole different kind of thing,” says Rutty.

Brodie’s method worked. “Definite immunity can be developed against the virus of poliomyelitis using virus rendered non-infective by formalin,” he announced in the prestigious journal Science in June 1934.

Throughout the following year newspapers breathlessly reported Brodie’s animal findings, then his testing of the vaccine—on himself and his co-workers—and on a heroic errand of mercy flight to deliver 600 doses to quell an outbreak in Kern County, California.

“Given only 24 hours notice, Dr. Maurice A. Brodie…cast his assistants into a frenzy of haste and today managed to answer death’s challenge with his first ‘load’ of vaccine,” a Hearst-owned wire service reported as the flight left Newark.

Between November 1934 and May 1935, 1,654 children and health-care workers in the county received the shot. The relieved county health officer told the New York Times that “not one single person receiving it has developed poliomyelitis.” Privately, he confessed in a letter to Dr. Park that Kern County was ill-equipped to run a proper vaccine study unless the National Institute of Health were to “send us trained persons to actually do the work of this part of the vaccination program.”

Brodie was cautious. The media cast him as a dashing young hero anyway.

Canada had produced medical research phenoms before. In 1923 Frederick Banting, who co-discovered insulin, became the youngest recipient ever of the Nobel Prize for Medicine (at 32). The research foundation named for him helped fund Brodie’s early work in Montreal and the two were frequently compared.

But unlike Banting, who had initially struggled as a mediocre student, everything about Brodie’s young life signaled that he was a star. He was a track athlete, an amateur boxer, a reporter for the Ottawa Citizen and the recipient of the Wood Gold Medal for distinction at McGill. He even rescued a boy from drowning in the Rideau River.

A man who loved genius and stardom—mostly his own—was scientist and author Paul de Kruif, and he was secretary to FDR’s funding organization. He initially secured Brodie’s grant then wrote rapturously about his progress in the press. “De Kruif was an enthusiast and if he got enthusiastic about your project, he would go all out to support it,” says historian Daniel Wilson, author of Living with Polio: The Epidemic and Its Survivors.

In his enthusiasm, Wilson points out, de Kruif and others ignored prominent skeptics like virologist Thomas Rivers who believed that vaccine trials were premature. De Kruif also never recommended oversight for a lab stretched thin.

When it was reported that Brodie had moved on to limited human trials the N.Y. Department of Health was overwhelmed with requests from mothers eager to have their children receive the unproven vaccine. In April 1935, Roosevelt was informed of a new Brodie trial in North Carolina, which, unlike the one in California, would be rigorously documented and investigated by federal health officials.

Expectations—and pressure—were high as newspapers reported on Brodie’s work and that of a rival: Temple University’s John Kolmer. Both Brodie and Kolmer were to present their findings at a meeting of the American Public Health Association in Milwaukee that October.

But that fall there were new questions about the efficacy and safety of Brodie’s vaccine. Other labs were unable to replicate his findings in monkeys. Two children in California who received the vaccine in October acquired the disease (though it was unclear if they did so before the shot, because of it or because it didn’t work). Of the 1,452 involved in the North Carolina trial (both those receiving the vaccine and those in the control group), not one developed polio, making it unclear if the vaccine had worked or if the participants simply hadn’t been exposed to the virus.

Many scientists began to privately circulate doubts about whether Brodie’s formalin-inactivated vaccine worked. Worse, they expressed horror that Kolmer’s ricinoleate-weakened virus vaccine might, in fact, be deadly. Five recipients of Kolmer’s vaccine died of complications from polio.

“I was asked to go out to Milwaukee and be the hatchetman,” Thomas Rivers, the imperious skeptic, recalled in his memoir. He delivered a harsh assessment.

When the APHA met again the following month in St. Louis, a federal health official named James Leake questioned Brodie’s findings and called Kolmer a murderer. The incident was made public. Within the month New York City barred Brodie from continuing his research.

He spent his last three years working as a pathologist in Detroit, where he died in 1939. De Kruif stepped aside at Roosevelt’s philanthropic organization and was replaced by Rivers, who set about funding more basic projects, including the Nobel Prize-winning breakthrough of culturing polio in the lab—a step necessary for producing a workable vaccine suggested years earlier by Brodie’s mentor, Alton Goldbloom.

Brodie’s work provided a cautionary tale of how not to run a vaccine trial. The lack of rigorous documentation for the California study left its results open to criticism and, when lumped together with Kolmer’s inept and dangerous work, made future trials seem irresponsible. But as Paul Offit points out, Brodie’s work also provided invaluable lessons about working with formalin-inactivated virus—lessons Jonas Salk would use to develop his successful polio vaccine in the 1950s. It was a medical triumph Brodie never lived to see.

“The first thing one notices about Dr. Brodie is the pleasantness of his greeting—to strangers and staff alike,” the Toronto Star wrote after a visit to Brodie’s busy lab in November 1934. It also noted his athleticism and drive. “Dr. Brodie’s physical characteristics leave one with the impression that here is an energetic, indomitable young fellow, ready to follow the path of his burning desire to achieve.” Four-and-a-half years later he was dead of a heart attack.

Offit, who co-invented the rotavirus vaccine, isn’t surprised that there were rumours of suicide, or as writer Greer Williams suggested, that Brodie “died of a broken heart.” For a researcher, the thought that any vaccine designed to save a life might harm one is devastating.

“You don’t just say ‘well, knowledge, it comes with a price,’” he says. “You take that personally.”