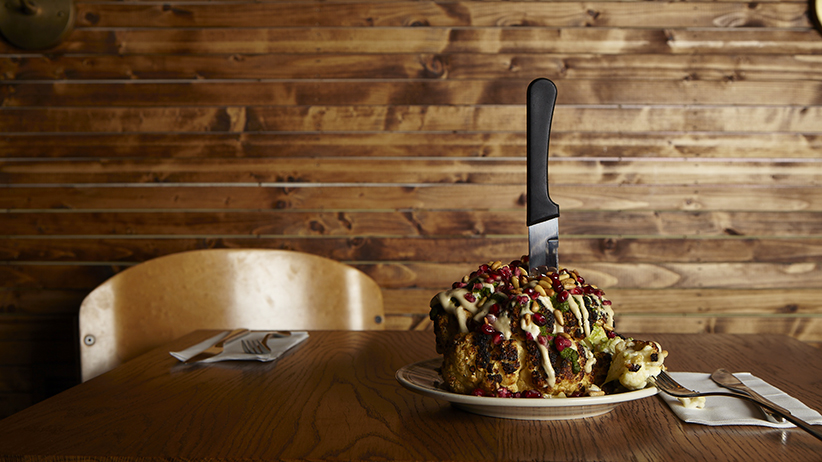 Clocking the major culinary trends in the year ahead would be impossible if chefs were genuine artists, given to mysterious bouts of isolated creativity. But, fortunately—at least for the purposes of this column—the culinary world actually functions much more like that of fashion.

Which is to say that the popularity of butter, cream and lobster rises and falls, just like hemlines. Completely new ideas come around far less often than the familiar past gets an invigorating tweak. And, thanks to TV and Instagram, when something successfully original really does land on the runways or plates of Paris or New York, barely a month will pass before the cheap knockoff conveniently materializes at your local Joe Fresh, Earls or Cactus Club.

So, on the what’s-old-is-new-again front, take note that the tasting menu is making a dramatic comeback. Five or six years ago, diners’ budding fatigue with the hyper-expensive, three- or four-hour experience of the menu dégustation, combined with belt-tightening during the recession, dealt this high-end dining format a near-death blow. But a few stubborn hangers-on (Hawksworth restaurant in Vancouver and Toqué! in Montreal) kept the tradition alive. Now, new practitioners are reinvigorating the format with an unpretentious approach.

Take Toronto’s Edulis, opened in 2012, which looks and acts like a neighbourhood bistro. Except, earlier this year, its dogged determination to cook above that particular weight class made a casualty of its à la carte menu. Today, if you want to sample chef Michael Caballo’s cooking, you must afford him ﬁve, seven or eight courses to shape his message.

Farther uptown and upscale is an even more intriguing example. Splendido has been around for more than 20 years, and the mood of the place has changed as often as the cuisine. For more than a decade, it aimed to be the local pinnacle of fine dining. But, on a recent visit, instead of the usual waiter in starched whites, the plates arrived courtesy of the chef-patron, who actually cooks. He delivered them with little more fanfare than if I had dropped by his house for a snack, but the meal extended to 24 exquisite courses—my first 20-plus in a decade.

Take note that such casually presented new tasting menus have been reborn with an entirely new accompaniment: juice—as in, the non-alcoholic stuff you drank when you were a child, but these are pure and exotic and intriguing on the palate. It is optional, obviously, and not for everyone. It seems only sensible that if restaurants are obliged to cater to gluten-free loonies and foie gras haters and other culinary eccentrics, they might as well throw a bone to the teetotaller, too. No less than Noma in Copenhagen offers juice pairings for its tasting menus. So does the Willows Inn on Lummi Island in Washington. Expect the same on a Canadian menu soon—most likely in B.C.

But you must travel to the opposite coast to find the most genuine Canadian reverberations of the Scandinavian-born wild-food movement. Its supporting cast of foraged ingredients can be found coast to coast, but only Newfoundland allows the commercial trade of the starring ingredient: real wild game.

So if you want to sample the unique flavours of wild meat in a restaurant setting, go to Todd Perrin’s Mallard Cottage or Jeremy Charles’s Raymonds in St. John’s, N.L. Moose, caribou, ptarmigan, you name it—you will find it all there. This has made the chefs in Newfoundland the envy of others across the country, many of whom are now lobbying their own governments for the same right. One hopes they will get it soon. In the meantime, note that Raymonds is carrying the banner well, and that a visit there is not just edifying, but good for the cause.

After wild game, there is wild fish. Two of those—tuna and grey mullet—used to be the only sources of bottarga, or Italian cured, salted fish roe. Five years ago, it was difficult to find here. Then suddenly, it seemed as though I was running into it everywhere: grated in some pasta at l’Isola in St. Bart’s; in a flatbread bar-snack at April Bloomfield’s the John Dory in Manhattan. Now, Toronto’s newly opened Buca Yorkville has upped the ante, using the roe of everything from lobster to herring—and even the gonads of sea urchin. They use it to season raw oysters, salads, pasta and more. There will be imitators.

The trend at which the new Buca is more conspicuously leading the way is salumi di mare, a.k.a seafood charcuterie. The New York Times already proclaimed the stuff a top dining trend for 2015. Even in Manhattan, you will be hard-pressed to find examples as intriguing as Buca’s cold scallop and lobster sausage, octopus soppresatta, cold smoked eel, and the other items with which chef Rob Gentile has been loading up his marble platters.

Meanwhile, on the humbler end of the ingredient spectrum, a member of the brassica family is still in surprising ascendance. I mean cauliflower. White or not, it is bereft of starch and carbohydrates. It bristles with antioxidant carotenoids and glucosinolates, as well as fibre and vitamin C. So, as long as you do not always eat it 1970s style (boiled, to purge the nutrients, then doused in cheesy béchamel), you are doing yourself a favour by adding it to the dietary regimen—as so many restaurants have been doing.

Versatility is the spur. Jamie Oliver makes cauliflower risotto. While in Hong Kong, the Calgarian chef at a restaurant called Yardbird put a Korean spin on it, battering and deep-frying florets, then lending them heat and sweetness to arrive at something they call KFC (Korean fried cauliflower)—which spawned imitators from Vancouver (Hawksworth) to Toronto (Thoroughbred Food and Drink). But the one I find most fun is the whole, roasted head that Anthony Rose serves up at Fat Pasha, cradled like a brain on a plate, sprinkled with pomegranate seeds and oozing tahini, stabbed with a steak knife, Walking Dead style.

Looking ahead to 2015, expect cauliflower to feature heavily in the burgeoning craze for purées that started last year. For when you run it through a blender with stock or butter fat, it glistens obligingly, while its flavour pays earthly compliment to just about anything. You will find an artful smear of it underpinning a crisp fillet of fish, a breast of squab, and a little chicken in between—new and lively plates, everywhere, for another good year.