The wildfire baby who came back to Fort Mac 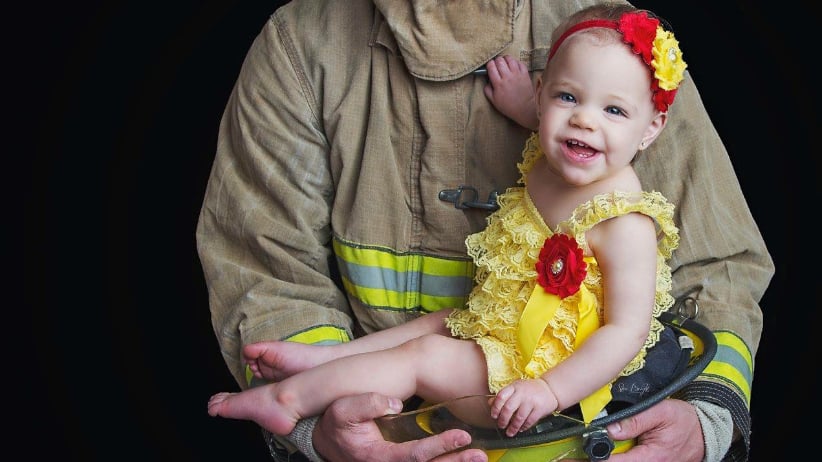 Brielle at 12 months, in a recreation of the photo taken shortly after her birth amid the Fort McMurray evacuation. (Star Bright Photography)

There was a moment this week when Monique Brunet, whose daughter Brielle was born—prematurely—as Fort McMurray burned, got up from the dining room table and went to the bathroom. Alone, she started to sob: “I still have flashbacks,” says Brunet. “Of everyone leaving, of being stuck in traffic, the fire all around us, not knowing whether the wind was going to change, not knowing what was going on.” Sometimes, these spells come on when she’s in gridlocked traffic. “Or if I see puffy clouds, I think—smoke!”

That is part of the reason Monique and her husband, Matt are going “all out” for Brielle’s first birthday party on Thursday, renting a hall downtown in Fort Mac, and throwing a “giant playdate,” with beach balls, chocolate cake, suckers and toy cars. They want to bring a bit of joy into an emotional week, filled with frightening memories.

A year ago, it felt as though they’d lost everything, as they fled the flames with their two-year-old son, not knowing whether their home, or even their town, would survive the raging wildfires. Cold dread turned to panic when they reached Edmonton and realized Monique was in labour. Like it or not, their baby was coming, four weeks early. And they had nothing for her. The tiny sleepers, car seat, and toys they’d lovingly chosen were all back home in Fort McMurray.

READ MORE: ‘We’re not ready, this is not part of the plan’

The weeks that followed weren’t much easier: Brielle had jaundice, wasn’t eating and dropped down to just five pounds. Monique, who went weeks without sleep, fought mastitis and repeated bladder infections. The family was bouncing from bed to bed, and ended up in a dank, windowless, basement apartment in Edmonton for three weeks. “I remember being in that dark apartment and just crying. It felt like a jail: we weren’t able to go home.” To this day, Brunet can’t stand to be in a room without light. Matt even put pot lights in the living room, to make it brighter for her.

One day, she’ll tell Brielle, a happy baby who loves to dance, all about the chaotic time before and after her birth. She’s created a scrapbook for her, filling it with newspaper clippings about the fire, the rebuild and Brielle herself; a photo of seven-day-old Brielle, curled up asleep in a yellow, firefighter’s helmet ran in newspapers and newscasts across Canada. 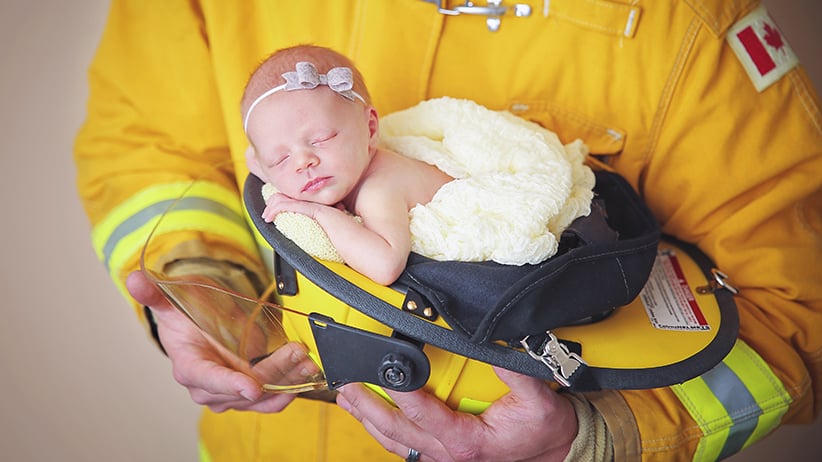 One year on, Brunet decided to recreate the photo: “Brielle’s a big girl now. And Fort Mac is shining—we’re coming back. That’s what the photo shows.” And once again, the photo is meant to honour the brave men and women who “stood the line to fight the fire for us, who looked out for our city.”

It seems trite, Brunet says, but time really does heal. “I’m doing a lot better than I was.” She finds their neighbourhood has grown a lot tighter; “everyone has come to know each other.” As for Brunet, she feels she’s grown kinder, more understanding in the last year. “I don’t get irritated when I’m stuck in a line anymore. I don’t sweat that stuff anymore. I’m more warm. My heart is more full of joy. For all we’ve gone through, we’ve been able to bounce back. We almost lost everything, and we’re just so grateful for what we have.”