The year of the happy hen

Why Taco Bell, Burger King and other major restaurant chains are sourcing eggs from cage-free hens 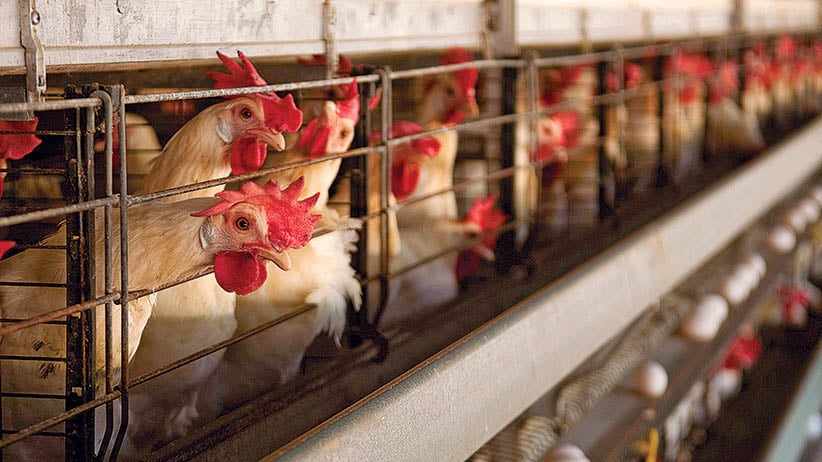 The common cage for an egg-laying hen is about the width of a magazine page. The cage, known as a battery cage and usually one of thousands in a wall, confines the bird to such frustration that she often tears out her own feathers or, if she shares the space, attacks other self-depluming poultry. But the cage age is drawing to an end in Canada, as some of the country’s largest food retailers commit to supporting happier hens.

This fall, Taco Bell committed to sourcing its eggs entirely from cage-free hens by the end of 2016. “Cage-free egg production supports the natural behaviours of hens, including walking, spreading of wings, nesting and perching,” said the press release. As in Europe, where the European Union banned battery cages in 2012, more hens in Canada will live as free-run, usually inside the same barns that previously had cages—though not as free-range, which would mean they have access to the outdoors.

In the same vein, Burger King U.S. has promised that all of its eggs will be free-run by 2017; Starbucks’s eggs will be too by 2020, and Subway and Tim Hortons have both begun the switch to free-run eggs without announcing deadlines. McDonald’s Canada, for its part, has vowed to source 10 per cent of its eggs (120 million total) from cage-free hens in 2016 and, like Kellogg’s U.S.—the cereal manufacturer, which also uses eggs in some of its frozen breakfast foods—will complete the switch by 2025. “This is a big move for us,” says Rob Dick, a leader of the transition at McDonald’s Canada. “We buy and crack a lot of eggs.”

The shift to free-run will bring the birds closer to “the five freedoms” recognized as necessary for proper animal welfare, most notably freedom from discomfort and freedom to express natural behaviour (the other three are freedom from hunger and thirst, freedom from pain, injury and disease, and freedom from fear and distress). “Cage-free is a significant evolution,” says Barbara Cartwright, CEO of the Canadian Federation of Humane Societies. “We’re grateful for that.”

Since the transition will mean farmers cannot collect eggs quite as efficiently or control disease as easily, it will mean eggs are more expensive to produce; at grocery stores, cage-free eggs currently cost as much as twice as the alternative. However, major restaurants in Europe did not raise their menu prices to offset the costs, and in Canada, too, breakfast burritos and egg salad sandwiches will not become luxury items. A McDonald’s spokesperson says its customers won’t have to pay more to keep lovin’ the Egg McMuffin.

Restaurant chains are leading a shift in the entire Canadian egg market. The National Farm Animal Care Council is currently revising a code of practice to require farmers of egg-laying hens to use cage-free housing or at least upgrade to “enriched” cages, which are furnished with perches, private nests and scratch pads. Although the revised code is not binding, it will likely be widely adopted across the country to meet consumer demand, as was the case in 2014, when the council required pig farmers to house pregnant sows in groups rather than in isolating gestation stalls. Companies including Wendy’s have since committed to stop using gestation stalls entirely.

“’Humane’ is an adjective that means kindness, mercy and compassion,” says Wendy Burns, an egg farmer in P.E.I. “To me, that means more than just basic neeeds.” At the Burns Poultry Farm Inc., which uses a European farming style known as enriched colony housing, the barn even contains lights to simulate sunrise. Steve Easterbrook, who started Canada’s first organic free-range egg farm in British Columbia in 1993, echoes her point. “Chickens are sentient animals. They have happiness. They have sadness. They have the joys of life, and the reverse of that is they suffer,” he says. “I only believe in cage-free production. I lost money for five years but I had a lot of people who really, really appreciated what was happening.”

Poultry will still be a long way from roaming free like the cast of Chicken Run. Most hens will still not see the outside or natural sunlight and will only live for about a year while they lay eggs, before being slaughtered early for meat (instead of enjoying a normal five- to 11-year lifespan). The cage-free commitments will also not impact chickens raised specifically for meat. These birds do not usually live in battery cages—since they live only about six weeks, it would be inefficient for farmers to constantly move them in and out of cages. But they endure crowding and procedures like beak trimming. Of late, chains such as A&W and McDonald’s have stopped selling poultry that is fed human antibiotics—a move that benefits the immune systems of consumers and pressures farmers to address the root causes of disease among their flocks. Still, says Cartwright, “more needs to be done.”

Meanwhile, the future holds better days for hens, as well as for egg eaters. Residents of cities including Montreal, Vancouver and Moncton, N.B., can now keep hens to grow their own eggs, while Edmonton’s city council will vote on the matter in February. With all the changes, Canadians can expect healthier hens and healthier eggs—although it’s unclear which will come first.