This couple moved from Montreal into a woodland treehouse 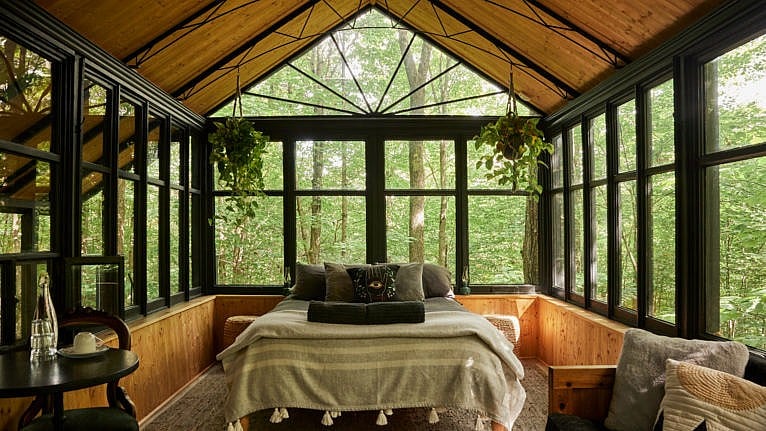 With stunning 360-degree windows, this treehouse makes “you feel like a bird,” says Lenoir. (Photographs by Marc-Olivier Bécotte)

In June of 2018, Ève Lenoir was visiting a friend in Tingwick, Quebec, when a handsome neighbour popped over to borrow some tools to renovate his treehouse. Lenoir, an interior designer turned farmer, said, “Oh my god, you have a treehouse?”

Patrick Lessard, a firefighter who grew up in nearby Danville, didn’t just have a treehouse. In 2008, he’d purchased a 15-acre forested property that included eight ramshackle buildings.

Lenoir spent the rest of her vacation helping Lessard paint the exterior of the treehouse. Slowly, they began to renovate the buildings by hand. They painted the exteriors black and finished the interiors with natural blonde wood. The pair have been together ever since, dubbing the property “Magic Tingwick.” Each building contains souvenirs from the couple’s faraway travels, such as door handles and a sink made of sculpted rock discovered at a shop in Bali.

In 2020, Lessard and Lenoir moved from Montreal to Magic Tingwick full time. Instead of sketching floor plans and sourcing furniture, Lenoir now spends her days tapping maple trees, tending to beehives, growing fruit on their farm and foraging for mushrooms in the woods. (Lessard still works as a firefighter seven days a month.) Lenoir, a self-described “witchy farmer,” also gathered a flock of black animals including chickens, alpacas, cats and rabbits to complete the pastoral occult vibes. 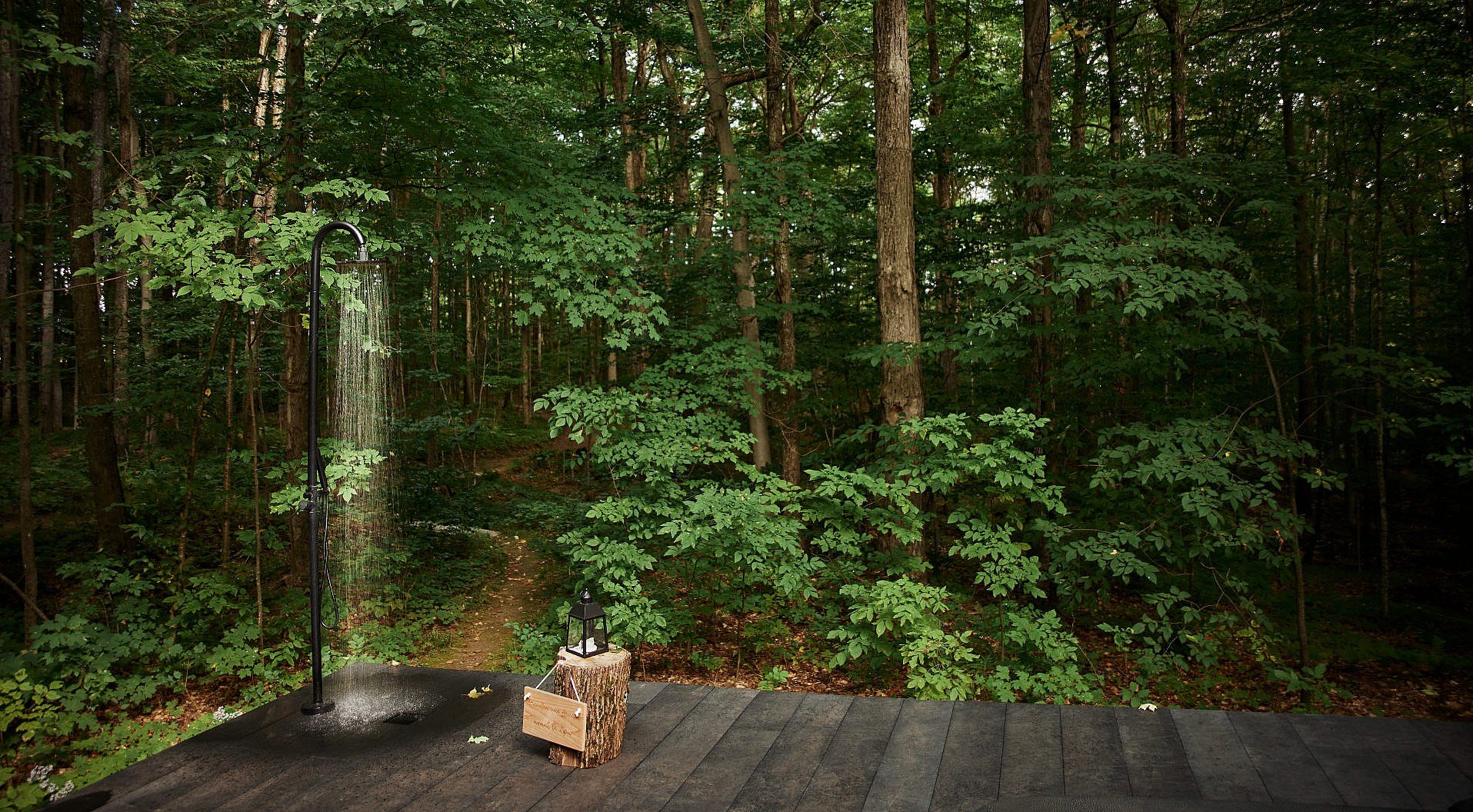 Entering Magic Tingwick’s forest is like stepping into a fairy tale. The crown jewel is a former platform used for hunting deer that is now an enchanted treehouse with 360-degree windows. “You feel like a bird,” says Lenoir.

With no electricity and a composting toilet, it’s glamping-lite. And the treehouse, which is available to rent on Airbnb, has become a draw for honeymooners looking for romance. “People also come here if they’re going through something hard and need to heal,” Lenoir says.

The couple live full time on the property in a converted 900-square-foot stable they’ve dubbed the “sugar shack.” The exterior, like all the buildings, is painted black, but the inside is refined rather than spooky, featuring minimalist details like white subway tile in the bathroom juxtaposed against knotted wood walls. 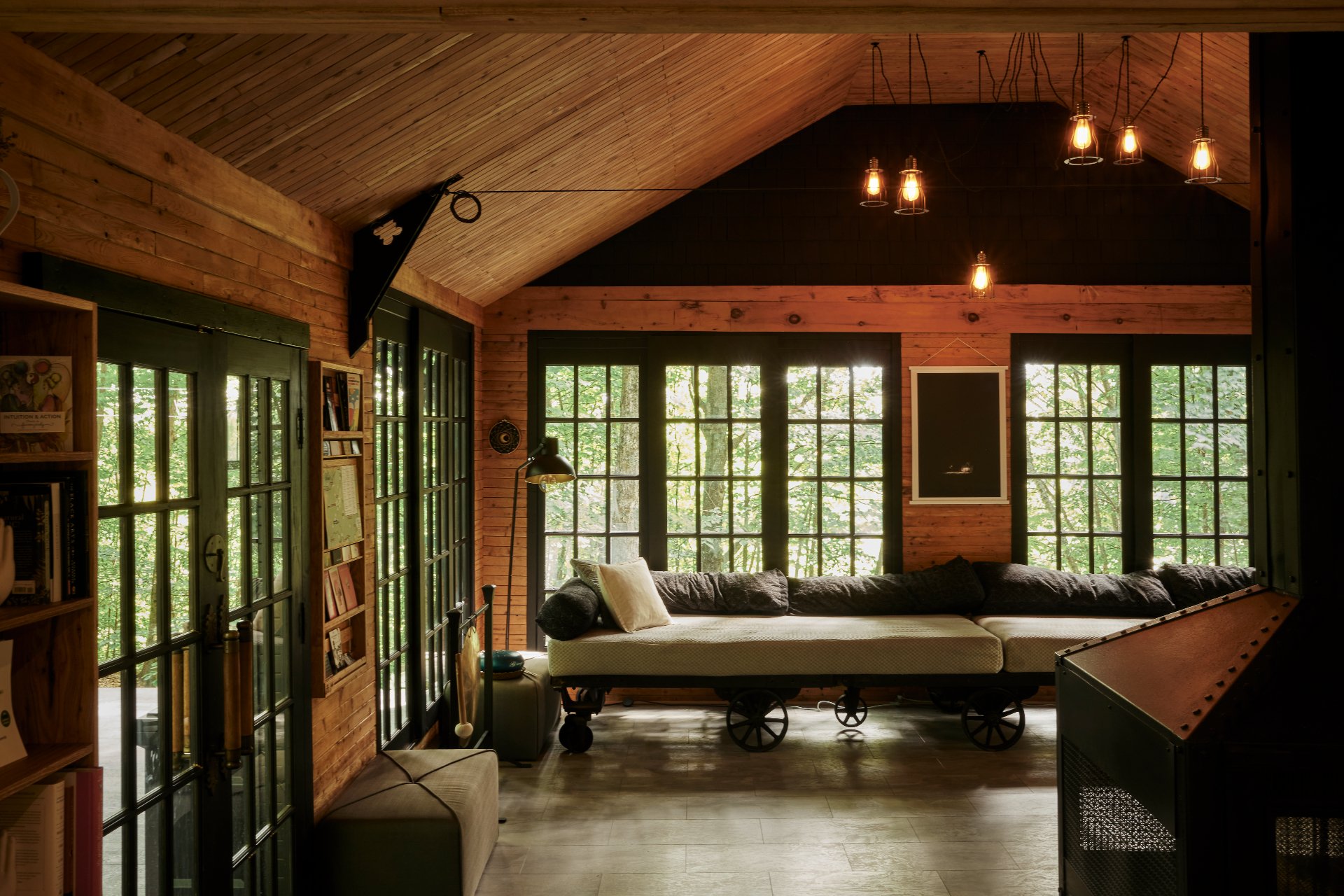 Each building on the property has souvenirs from the couple’s travels and adventures.

They use a professional-grade evaporator on the balcony to boil sap into maple syrup. Lessard dreams of one day learning to make acerum, a spirit made from fermented maple syrup.

When not occupied by their latest reno—they’re currently at work building an outdoor cinema in the forest—Lessard and Lenoir spend their time tending to their animals and the farm. They relax in the forest, read books by the river and soak in the hot tub watching fireflies. In the winter months, they pack up and travel the world, gathering inspiration for their next projects.