So this happened: Royal couples, courtside 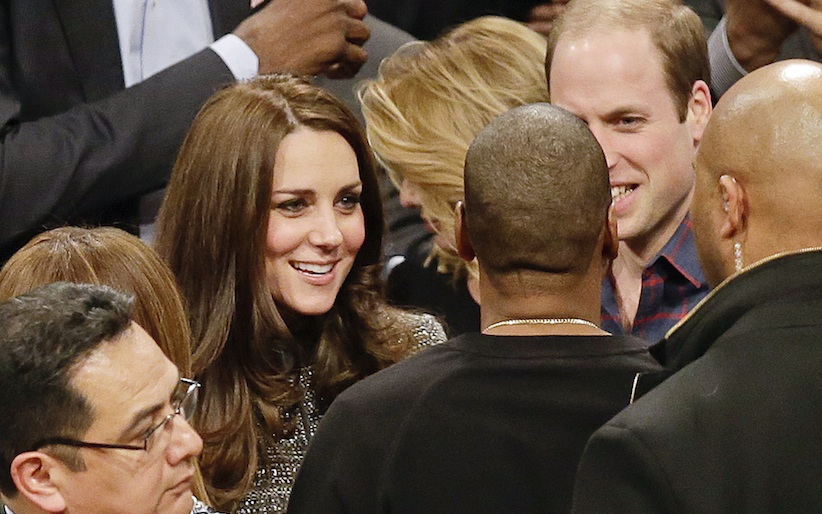 Kate, left, Duchess of Cambridge, watched as Britain’s Prince William, right, talks to Jay-Z during the second half of an NBA basketball game between the Brooklyn Nets and the Cleveland Cavaliers. (Frank Franklin II, AP Photo)

The Duke and Duchess of Cambridge arrived at their seats early in the second half of the Cleveland Cavaliers’ game against the Brooklyn Nets on Monday night.

Cleveland’s Kevin Love was shooting a free throw when fans stood and roared as the couple walked along the sideline to seats near centre court.

LeBron James had called being watched by them as part of their first trip to New York “an honour” on Sunday.

The couple met earlier at Barclays Center with NBA Commissioner Adam Silver, celebrating a partnership between the Royal Foundation and the league to raise awareness about the importance of international wildlife conservation.

Crowds of officials began gathering near one of the tunnels to the arena floor at halftime in preparation of the royals’ move to their seats.

They were shown on the overhead videoboard with about 2 1/2 minutes left in the period, getting another loud cheer when Kate waved to the camera.

After the third quarter, Jay-Z and Beyonce were led across the court to meet them. Jay-Z was formerly a part-owner of the Nets and has kept his seats next to the team’s bench.

Watch: Jay-Z and @Beyonce meet the royal family during a break in the @cavs–@BrooklynNets game: http://t.co/iMnJYi1Bzu