This man is building a tiny-home utopia in P.E.I. 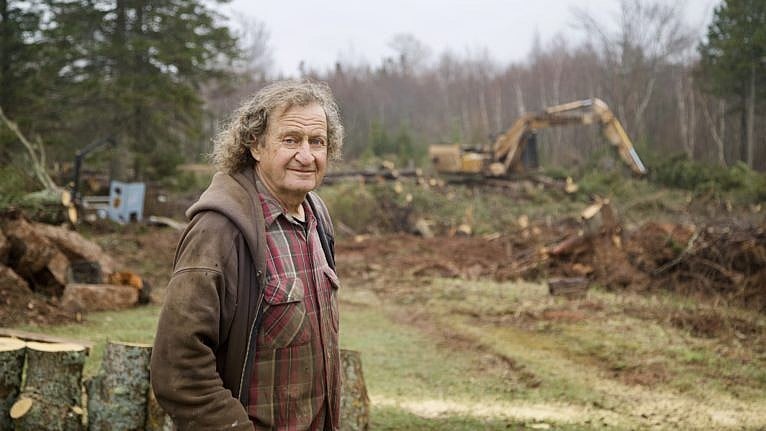 On Route 6 in Bedford Station, Prince Edward Island, a retired jack of all trades is on a mission. Jim Walmsley spends long days clearing part of his 25-acre property with the goal of opening a tiny home community for those priced out of the market.

According to the Canadian Real Estate Association, homes in P.E.I. sold for an average of $414,742 last month—a record high, and a 20.3 per cent increase from April 2021. In Walmsley’s vision, a membership of $5,000 will cover a plot fee for 25 years, with residents shouldering the cost of building or installing their own tiny home. The 73-year-old anticipates a community centre for residents and a laundromat, but talk to him long enough and you’ll hear all about his visions of a self-sufficient utopia.

Tiny homes still have unsettled legal and regulatory questions that could affect his plans, but Walmsley’s well versed in them. His first home, purchased in rural Nova Scotia when he was 20, measured about 12 by 18 feet. He loved its efficiency, making his quest a natural fit.

His tiny home community, about a 10-minute drive from Charlottetown, would be an intentional collective of like-minded people. For the adventurous or unfussy community-minded individual, Walmsley’s utopia might represent an affordable plot of paradise in the pastoral P.E.I. countryside. His vision won’t solve the housing affordability crisis, but it could help some people escape it.

We asked Walmsley about his plans, the challenges he’s faced, and how he’s avoiding the temptation to cash out in a seller’s market. The conversation has been condensed and edited for clarity.

Why did you take on this project?

I see what’s happening in Charlottetown. There’s no place to live for people who don’t have an awful lot of money. I’m taking land that’s been sitting undisturbed for 40 years and I’m turning it into something that’s going to be good for the community.

I’ve been a single man most of my life—probably because I like to work all the time. I don’t have any kids. I’ve got one brother and he doesn’t need any help from me. So I have to find a way to more or less dispose of my estate. I’m planning on doing that by setting up a tiny home community and having it run in perpetuity long after I’m gone.

A parcel of land on Prince Edward Island would sell for a pretty penny these days, but you’ve chosen to clear your land to build a community. That takes a lot more work.

Well, it’s something that I like to do. I like to work. I bought a great big excavator. It’s such a hoot to run. You can dig, you can trench, you can pull out stumps, you can level off land. As the trees get levelled off, it’s the difference between night and day. I could sell the land that I cleared right now. In today’s market, I think I could get $100,000 for that as a two-and-a-half-acre piece of property. But I don’t need money. I wouldn’t mind buying a gyrocopter, but I live simply. No sense in generating money I don’t need.

So this isn’t in any way a profit-seeking venture for you then.

No, definitely not. Currently, it’s a money-losing venture, and any profit that eventually comes from it will just spin around and go back into the project.

What have been some of the biggest challenges you’ve faced so far?

I started last fall, but I couldn’t work this past winter. We had so much snow. That was a challenge. Right now I’m clearing land, burning brush, putting in drainage ditches and things like that. My excavator enables me to do it by myself. I think I’ll probably parcel off 10 to 15 acres for this project. I’ve probably got about four acres cleared.

Something I learned the long way is you can’t leave brush on the ground because the ground won’t dry. Right now I’m burning off the brush every day. If I keep doing all this by myself, it’ll take two years to clear space for the full community. If I had some help, people could move onto the site this summer. In two years, it should be up and running—I’m talking maybe 50, perhaps 100 sites.

Have potential tiny home owners started inquiring about wanting to live in the community once it’s set up?

I’ve had some of that, but I’ve had to turn them down. The people who are asking know it’s going to take off and be a good project. They want to buy a lot and more or less sit on it. But what’s for sale isn’t lots. What’s for sale is a piece of a community. There’s a certain type of person I want here.

So who’s going to live there?

People with money are probably not going to be the ones who want to live in tiny houses. They’re not going to be able to, either. It’s a little bit of a half-step between living in luxury and survival. But I think once you get into the routine, it’s probably better than making the change back to normal.

RELATED: Want to get in on Canadian real estate? Welcome to the down-payment hustle.

I think some one-bedroom apartments in Charlottetown can be had for $1,400 or $1,500 a month, if you can find one. Most of that is based on wanting a flush toilet and a shower. How long do you have to work to get them? At those prices, if you’re getting $15 an hour, you have to work a lot of hours every day just to pay rent and utilities before covering other living expenses. It’s an awful lot of money you’re paying for very little convenience.

Are you planning to live as part of this community?

I live about 600 or 700 feet away, in the middle of the woods, and I’ll be involved as long as I’m alive. But I really hope others will more or less take charge. I don’t want to become a policeman or a good guy or a bad guy.

How have the neighbours reacted?

I get people driving by and rolling down their windows to say it’s a great project. One lady stopped and she said she couldn’t believe I’ve done this work entirely by myself. She said she’d never seen such a productive enterprise from one person.