‘To all of you who are suffering: be gentle with yourself. There is life after the storm.’

Letters to the editor, March 3, 2022: Readers weigh in on the horrors of long COVID, the electric vehicle boom, and a deep talk with Kathleen Wynne 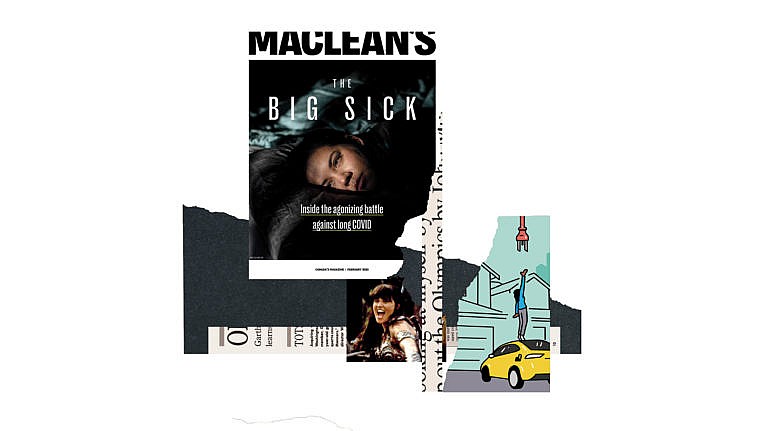 In the 1990s, following an episode of the flu, I was diagnosed with post-viral syndrome. After 30 years, watching what is happening now with so many people following COVID-19 infections (“When the virus moves in,” February 2022), I am finally understanding my symptom set. When I walked, the fatigue felt like I was moving underwater with 20-lb. weights attached to my legs. I suffered heart palpitations, restricted breathing and visual distortions. Doctors were puzzled and, much to my dismay, arrived at a diagnosis of depression. I had flu-like symptoms for more than a year, and then things evolved into a low-grade disability, physical and emotional. A community nurse, I lost the stamina to work. We were sheep farmers, but we sold the sheep. After 10 years, slowly my health returned. Last summer I celebrated my 70th birthday, but I can dance to Michael Jackson’s Thriller. To all of you who are suffering: never give up hope; be gentle with yourself. There is life after the storm.

Your article illustrates the health, social and economic impacts of long COVID. Viral Neuro Exploration (VINEx) is a Canadian non-profit aimed at further understanding how viruses, including SARS-CoV-2 and other infectious agents, impact brain health. We formed partnerships with COVID Long-Haulers Support Group Canada and Neurological Health Charities Canada, and surveyed more than 1,000 COVID long-haulers. We found that in the early stages of long COVID’s emergence, women in their middle years, who are disproportionately affected by it, were often not believed. While we continue to look at infection, recovery and vaccination rates, we also need to focus on the quality-of-life impacts, and to drive research investment to better understand how infectious agents can affect the brain, with a line of sight to better diagnostics and potential therapeutics.

In December, Jason McBridge wrote about the electric vehicle boom.

The lack of foresight in planning for a zero-carbon future and the need for new electricity production to power EVs was well-illustrated in Jason McBride’s article (“The electric car crash,” January 2022). Suburbia, which created the problem of low-density living, at least has space for domestic solar panels. But new housing developments have inappropriate roofs, zoning sometimes limits “unaesthetic” panels and the CMHC doesn’t seem to see the value of solar in new construction. I installed 6.4 kilowatts of photovoltaics on the roof of my garage when I bought an electric car, which I estimate uses half of the energy produced. The panel’s costs are easily amortized over 25 years—much faster if you consider the $2,000 savings in fuel. We need leadership in urban design and architecture to promote decentralized power production and charging access. What we don’t need is pressure to build more dams, nuclear power stations and other large-scale projects.

The juxtaposition of the articles on electric cars and on orcas (“No fixed address”) in the same issue is ironic. The former explores how EV charging is straining the electric grid. The latter worries that B.C.’s “southern resident” orcas are wandering far away because their food has been removed by the numerous dams on the Columbia River. Dams that create electric power. It is not possible to shut down dams and at the same time increase the electricity grid. We can’t have it all. It’s time we consumed less rather than thinking that switching to different power sources will solve our problems.

Many of us look forward to the day that more environmentally friendly electric cars are the common method of transportation. However, problems need to be dealt with. Imagine you have to evacuate your Florida residence. All cars are heading away from the hurricane’s reach. But they are mostly EVs, so they eventually need to be recharged. If you are caught up in a three-hour traffic jam, with a draining or dead battery, then what? Say this happens in a northern region during a blizzard. Trapped EVs would eventually lose power and have no heat, no GPS, no radio. All you can do is call 911, but it can’t dispatch a police car as the roads are blocked, and probably all police cars will be EVs. Seems to me that the cart is way ahead of the horse.

Your interview with Kathleen Wynne was revealing (“Interview,” February 2022). I was a supporter of hers, but my former respect for her flies out the window when she acknowledges “I wrecked the Liberal Party of Ontario and I lost so badly.” All you had to do was read the headlines at the time to see the hoi polloi didn’t like her and didn’t trust her. I was not among them, but surely, faced with this news, the obvious strategy was for her to clear out and let someone else take over.

Your article just grazes the surface of the issues plaguing the veterinary industry (“Ruff days at the office,” Bearings, January 2022). Yes, we have staffing shortages, but staff retention is a whole other issue. Mental illness is at an all-time high: one in six vets report having some form of mental illness, and one in seven have thought about suicide. Why? Imagine going to school for eight years and burying yourself in debt, all because you care about animals and their owners. But you can’t help—because the owner doesn’t have enough money or thinks the internet is more trustworthy than you are. Imagine working 13 hours, missing time with family, only for clients to be angry you couldn’t see their pets sooner. We need systemic change if we hope to retain good, healthy vets. That means widely available counselling, and requiring veterinary hospital managers to have health-care and human-resources training. Increased medical insurance for pet owners would also help, as would increasing the number of veterinary graduates.

The cost of misinformation

In January, Stephen Maher wrote about the infodemic.

I am astounded by the lies that can be spread without consequences (“The next virus,” February 2022). Shanon Sheppard of Halifax should be criminally charged for causing death. There must be cases where people believed her lies, refused to get vaccinated and subsequently died of COVID-19. It would be only fair that she should have a criminal record and even spend a few months in prison. Mark Friesen was airlifted to Toronto’s Mount Sinai Hospital at an estimated cost to taxpayers of about $20,000. As it was a wilful, self-inflicted injury, I submit that he should have to reimburse taxpayers that money.

A message from the god of war

It was a delight to read Kai Cheng Thom’s article on Xena: Warrior Princess (“I am woman (also, warrior),” February 2022). I played Athena in Series 5, and I can attest that we did feel empowered when filming. Lucy Lawless, as Xena, set the tone on set, which was respectful, relaxed, kick-ass and fun. I am so glad that it was a lifeline for Ms. Thom and brought a flame of light into her childhood. That is the best compliment we can hope for. As an aside, the corsets were surprisingly comfortable!