To serve and forecheck 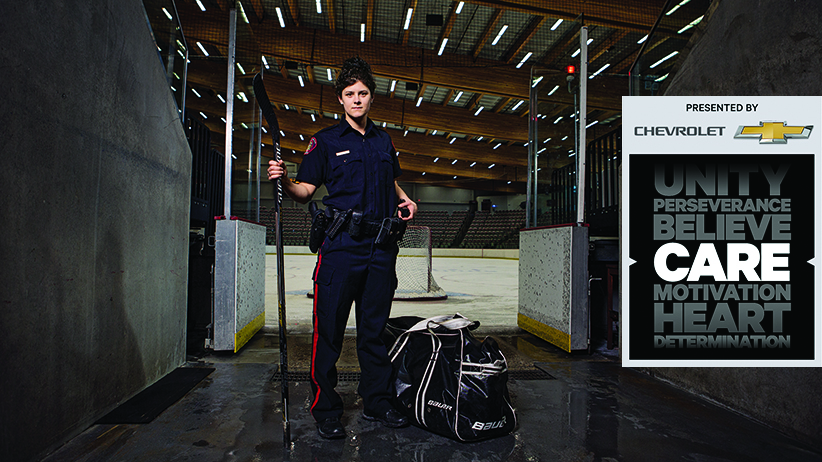 Louise Warren is a forward on the Calgary Inferno. It’s an unpaid gig—with the exception of a few team-related expenses that are covered—and so like most pros in the Canadian Women’s Hockey League, Warren needs a full-time job to support herself. While a nine-to-five job would make the most sense, leaving weekends and evenings open for practices and games, Warren chose policing—one of the few jobs that’s more intense and dangerous than her role on the ice. Last October, Warren worked a 12-hour overnight shift before lacing up for the Inferno’s opening weekend match-up against Boston, scheduled at the ridiculous hour of 8 a.m. She scored one goal and assisted two others while her workmates were sound asleep. “She puts on her stuff,” says Inferno head coach Scott Reid, “and it’s like a full 360-degree mindset change: ‘My job’s done, I’m here to play hockey, I’m here to get better and help the team get better.’ ”

A rookie with the Calgary Police Service, Warren just wrapped up her second season with the Inferno and is making a name for herself both on and off the ice as someone who cares—about her community, her job and women’s hockey. “The fact that she’s juggling both,” says Reid, “shows how much she cares. She’s out there serving day in and day out. The girls on the team look up to her.” It’s the way she’s always been, says her father, George Warren. “She’s empathetic and she’s got a strong work ethic. She cares about how the team does and if it doesn’t do well she takes that onus on herself.” George always told Louise she’d make a good police officer. He should know: he’s been one for 26 years.

Warren learned to play hockey on an outdoor ice rink in Pembroke, Ont. She signed up for the boys’ rec league at seven years old—the only option available at the time. It wasn’t long before she was named captain of her team. In Grade 9, she moved to high-level women’s hockey with the Lady Senators in Ottawa. It was a good fit for Warren, but a two-hour drive to practice, which ran twice a week from 8 p.m. to 10 p.m. “I’d get really tired on the drives home,” says George. “I’d have to pull over, get fresh air, throw stones, go for a little walk. I’m thinking, ‘I’m trying to do what’s best for her, but I’m not going to if I kill her in a car accident.’ ”

Her parents considered billeting Warren with a family in Ottawa, but ultimately George and Nancy, Louise’s mom, sent their daughter to a U.S. prep school, Brewster Academy, in Wolfeboro, N.H.—which offered her a full scholarship. “My grades were suffering because I was more hockey-focused than anything,” says Warren, “and the travelling was taking a toll. At Brewster I didn’t have to worry about that. They incorporate sports right into the school day.” In Grade 10, Warren left Pembroke and, apart from a couple of summers, she’s never moved back home. “Going away at 15 was tougher on us than it was on her,” says George.

Warren flourished at Brewster and by her junior year had scholarship offers from Cornell, Sarah Lawrence and Boston University. After growing up in Pembroke and living in the even smaller town of Wolfeboro, she chose Boston University, because the campus is in the heart of the city. “She was one of those focused kids right from the beginning,” says Brian Durocher, head coach of the BU Terriers women’s hockey team for the last 12 years. “As a player, she’s got great straight-line speed, she’s a good wall player and a super teammate. She would do a lot of the dirty, grubby things that are part of the game: blocking shots, battles on the wall and battles in front of the net.”

In her four years at BU, Warren never missed a game and played in two NCAA Frozen Four Championships. And, says Durocher, “she saved her best for last.” In 2013-14, Warren’s final season, she was voted captain by her teammates. Many of the Terriers’ big-name players had graduated, and another star, Marie-Philip Poulin, was with Team Canada prepping for the 2014 Olympics. “People weren’t expecting us to do much,” says Warren. “That motivated me and the rest of the seniors to prove everyone wrong. We had a chip on our shoulder.” She went to Durocher and told him she knew people were considering it a rebuilding year, but she wanted him to coach to win. “Louise willed the team to success that year,” says Durocher. “She wasn’t really seen as a prolific goal scorer, but she led by example, and had 27 goals. Only five kids in NCAA hockey were above 25 goals that year and she was one of them. She was going to find a way and get it done.”

The Terriers won the divisional title for the third straight year and the team named Warren MVP. “I cared so much about every single girl on that team,” she says. “It didn’t matter if they were on the first line or they were the third backup goalie. As the captain I wanted to keep everyone on the same page—all 25 girls in the dressing room. You spend so much time with them, live with them, socialize with them, play with them—and that year we rarely had any team drama.”

When Warren graduated with a degree in health sciences she had some tough decisions to make. Players who are going into the CWHL have a say in what city they want to go to. They put three cities on a list, though they still have to go through a draft. (They typically wind up on their first choice.) An avid snowboarder, Warren picked Calgary first because of its proximity to the mountains. But she also needed a job. “I thought she’d enjoy policing,” says George. “She’s got great people skills, can comfortably speak to coaches, peers and younger people. She’s always had common sense—and could never sit still very long.” In her youth, Warren had resisted the family business, but as an adult it seemed like a solid choice. She submitted an application to the Calgary Police Service.

Warren’s parents gave her their old car and George drove her out West, staying in cheap motels along the way. It reminded him of those early years of travelling for hockey. Once they arrived, George was on a plane the next morning. “I was leaving her again,” he says. “We drove to New Hampshire and left her, and then we drove her to Boston and left her, and then I drove her to Calgary and left her.” Warren remembers the moment well: “He was walking into the airport and I’m thinking, ‘Oh my gosh, I’ve been to Calgary all of twice and now I’m here to pursue a career, maybe for a lifetime.’ ”

Hockey helped ease the transition. “You adopt this team as your family,” she says of her 2014-15 rookie year with the Inferno. “You go from playing on a team for four years in university and loving every second, to ‘I’m on this team now, these are my girls, these are my friends, these are my family.’ You want to produce and play your best and bring the team to where everyone wants to go.” In the off-season she did six months of police training. Last fall she became a full-time patrol officer responding mostly to emergencies from her cruiser. Due to shift work, she could no longer make every game—and it meant some adjustments on the ice. Reid calls her a depth player, an unsung hero who contributed to the franchise winning its first Clarkson Cup last month. “I’ve been put into that fourth-line position,” says Warren, “which can mean helping out the team mentally, and keeping everyone supported on the bench. And then I’ll be thrown into a second-line position, where you have to adapt to a more dominant role.”

It’s not unlike policing, which is different every day. “It’s so exciting,” says Warren. “You don’t know what you’re going to get. Will one call take up a whole day or are you going to do 30 calls? What’s the city of Calgary going to bring me today?” Her superior, Sgt. Dave Ellement, says Warren is thriving at work and he’s not surprised—in his experience, hockey players make good police officers. “She’s very coachable,” says Ellement. “She knows she’s part of a team. And this job is a grind, just like hockey. The calls never stop, people always need help.”

As for the burnout and fatigue from juggling both? “It hasn’t happened yet,” says Warren. “I made it through a whole season during my first few months on the job. In my mind that’s going to be the hardest time, new on the street and second year on a high-profile team. Fatigue just hasn’t been an issue.” Case closed.

In Partnership with Sportsnet