Too close for comfort

The Canadian women's hockey team gets a scare from the Finns 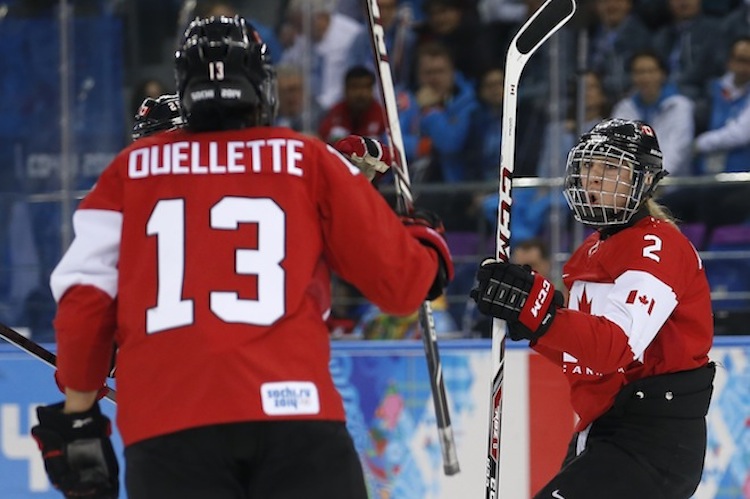 Finland has never beaten Canada in international women’s hockey. But the day of reckoning is coming, and it’s coming soon.

In their second game of the Sochi Olympic tournament Canada peppered Finnish goalie Noora Raty with 42 shots, allowed only 14 against, and ended up winning 3-0, but the box score doesn’t tell the story.

After a scoreless first, and a scoreless second, you could see the worry spreading across the Canadian bench. And the celebration when Meghan Agosta-Marciano finally broke through, hammering home a slapper from the slot with 11 minutes left in the third, was a little too real and went on a little too long. The plucky Finns almost tied it up a couple of minutes later, before Jayna Hefford took the puck up ice and made it 2-0 on a dazzling solo drive to the net. Rebecca Johnston added a third marker with three-and-a-half minutes remaining, converting a slick feed from Hefford. Crisis averted. Canada is now assured a place in the semi-final.

The Canadian team, long accustomed to questions about the gulf between the big fish and the minnows in their sport, are always careful to pay respect to their opponents. “They’ve got a solid ‘D’ and a great goalie,” said Jennifer Wakefield. “I really think that it’s not a two-man race anymore and it’s evident that there’s a third and a fourth.” But this time, they might actually mean it.

“They were great tonight, they were tough and really physical,” said team captain Caroline Ouellette. “They didn’t give us many openings. Kudos to them.”

The Finns, winners of the bronze in Vancouver four years ago, also lost their first game of the tournament, falling 3-1 to the Americans. But they have beaten Team USA twice in recent years, thanks to Raty’s tremendous goaltending. And they know that such upsets are going to happen again–even against mighty Canada.

“They were definitely getting a little frustrated out there,” Raty said afterwards. “I’ve never seen them celebrate a goal against us like that before.”

Her Canadian counterpart Shannon Szabados walked by and gave Raty a tap on the bum with her stick. It was a mark of respect for an equal.