Toronto has a self-esteem problem

Those popular 'Toronto vs. Everybody' shirts are caught in a copyright tussle with a Detroit brand. Why Toronto needs to take pride just in being itself 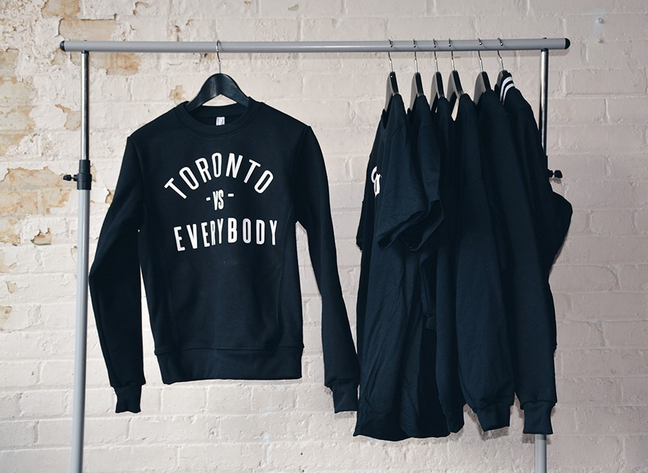 It’s easy to forget that Wednesday, Oct. 14—Game 5 of the American League Divisional Series between the Toronto Blue Jays and the Texas Rangers—was a night to rage about before it was a night to remember. A rule that no one had seen before in baseball being enacted on the Blue Jays in this decisive game was the latest in a long line of injustices levelled against Toronto’s sports faithful: Gretzky’s no-call high-stick against the Leafs in 1993, Vince Carter’s last-second shot bouncing cruelly off the rim in 2001, the 2013 Leafs bending then breaking despite a 4-1 lead in the third period.

So with no one informing them why a crucial run had been scored against them, the timing felt cosmically appropriate for Jays fans to show righteous outrage. And so the angry flinging began: detritus and cups, some empty, some not, crested over the upper deck and onto the lower deck, the field, even onto a child.

Shirts emblazoned with “Toronto vs. Everybody” have become the city’s statement-making wardrobe item of the season. Created by a Toronto-based business called Peace Collective, the shirts—inspired, says founder Yanal Dhailieh, by the Raptors’ “We The North” slogan—are hip, hewn in the slim sans-serif capital-letter fonts that are all the rage in Toronto; each purchase provides a child with a week’s worth of school meals with their partner Breakfast for Learning. The Blue Jays got on board, wearing the items themselves in the dressing room during their incredible postseason run; Peace Collective started selling the shirts like hotcakes. Toronto against the world? It feels like it. Why not?

All of this is good. Until it wasn’t.

Many in the hip-hop intelligentsia immediately recognized the expression from the raps of Detroit-based emcees like Eminem and Royce Da 5’9, who had been lacing the line in their lyrics ever since the song by that title, from this year’s Eminem mixtape Shady XV:

Tell ’em if they want it, they can come get that (static)
I swear I love my city, I just want less (static)
See me, they salute me, they ain’t ready for that (static)
Detroit vs. Everybody

The song itself was inspired by Tommey Walker Jr.’s three-year-old clothing line, where emblazoned on the front, in a familiar sans serif, a phrase that had become an anthem for a broken city down on its luck: Detroit vs. Everybody.

Walker commented on the alleged plagiarism for the first time on Wednesday, telling Deadline Detroit: “These guys are scumbags. I’ve been in a battle with them for more than a year. We’ve sent a cease-and-desist letter.” (Update: Dhailieh sent Maclean’s the following comment: “Peace Collective is the owner of the registered Canadian trademark “TORONTO VS EVERYBODY” and any allegation of infringement by Mr. Walker or his counsel is, in our opinion, false. … We received Tommey Walker’s cease and desist a month ago and responded within 24 hours with our trademark and we never heard anything back. We took all the correct steps and were never notified and contacted again. Mr. Walker’s counsel has not contacted us in any way since we sent this letter and, as such, presumed that he had accepted our letter as a complete response to his cease and desist letter of September 4th of this year and that the matter was closed.”)

The issue is now being handled privately, with legal talks under way. But this imbroglio over embroidery is more than an issue of plagiarism. It speaks volumes about Toronto’s pervasive lack of self-esteem. 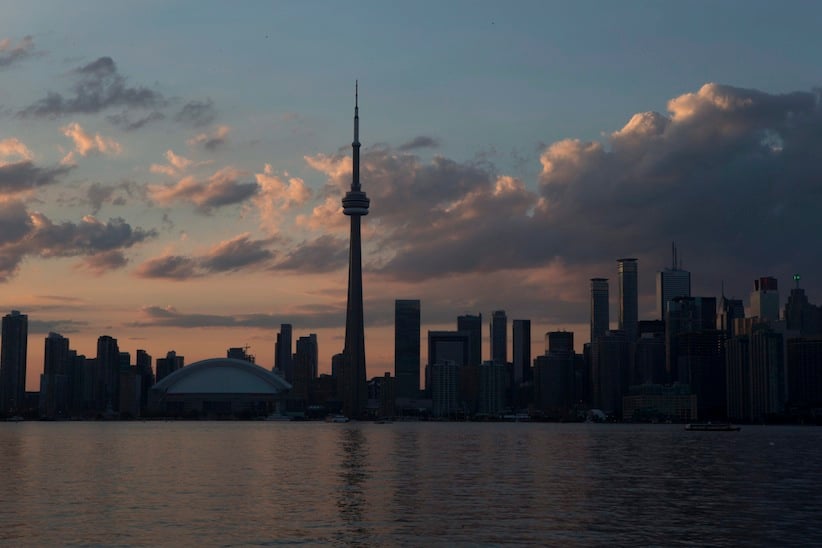 The sun sets over the Toronto skyline during the opening ceremony for the Pan Am Games, Friday, July 10, 2015. (AP Photo/Rebecca Blackwell)

Toronto has long compared itself to international urban giants, rather than be content to compare itself to Canada’s cities; we want to be New York, instead of Toronto. That’s not inherently a bad thing, but it’s also something of a zero-sum game; it’s hard to compete against America when you are, well, not in America. It’s these two combined things that can make it isolated: not big enough to compete in the World-Class City Olympics, yet not low-profile enough to measure itself up against other cities in Canada, so other non-Torontonians see it as big-headed, the “Centre of the Universe.” (Montreal, on the other hand, is fairly fret-free about its status.) Toronto is blessed to sit atop so many lists: The Economist named Toronto the best place in the world to live, and the safest city in North America; Metropolis Magazine named it the most liveable city in the world; global design firm Arcadis found Toronto to be the most sustainable city on the continent. (To see more, you can go to Toronto’s official website, where there is a “progress portal” collecting our international rankings, which could have also been named the “humblebrag hub.”) Exports from Toronto and our nearby environs are dominating pop culture, with Drake, the Weeknd and Stratford, Ont.’s Justin Bieber all sitting atop their respective genres (which makes the co-option of a slogan of Detroit’s scrappy hip-hop scene feel particularly rude).

Heck, sometimes Toronto is even right about everyone being against them; during the sixth game of the American League Conference series against Kansas City, Fox displayed an ad promoting a World Series featuring the Royals and the Mets—with two full innings remaining in the game. (As if to punctuate this point, folk hero José Bautista launched a game-tying home run not long after the ad was displayed.) And there’s no doubt that there were ruffled feathers when the international media cared about Toronto only as the prefix to “mayor Rob Ford’s antics.”

But other cities are wronged too, often in ways that matter more. Like, say, Detroit, just as an example. More than half of its children live in poverty, as do 38 per cent of its residents; it has the highest violent crime rate in America. Its unemployment rate, once sky-high, has settled somewhat, though that’s in part from a plunging population. The fact that Toronto imported a civic movement from a city where the forces against it are economic and deep-rooted makes this issue stink all the more. The borrowed slogan punches down—a change of pace from Toronto’s typical punch-up attitude.

Whatever happens to the legal fight over Peace Collective’s branding, it’s a perfect moment for Toronto to awaken to the fact that it deserves a civic movement all its own. Something that says something about who we are, rather than defining ourselves against what we are not. (For instance, with basketball season in full effect again, “We the North” ain’t so bad.)

There’s a thin-line difference between pride and insecurity. And this minor brouhaha highlights the fact that Toronto, more often than not, can’t tell the difference, as plainly as a print on a shirt.