Fiercely protective of his little brother, his friends called him ‘the protector.’ As a bouncer, he aimed to make people smile. 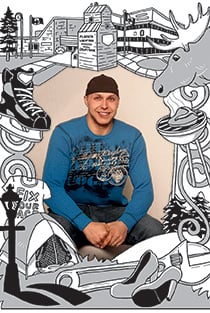 Travis John Colby was born in Edmonton on Jan. 23, 1983, the second son born to Milo, a bus mechanic, and Shirley Colby, then a stay-at-home mom. Two younger siblings would follow, Bradley and Kristy.

He attended LaPerle School in Edmonton for three years until the family moved west down the highway to Spruce Grove. Edmonton, however, was still a draw for him. When he was 12, he and his older brother, Dan, weren’t getting along. Travis packed his prized possessions, including his Nintendo machine and games into a backpack, and set out on his bike along the busy highway for the 40-km trek to his Aunt Lisa’s house in Edmonton. “He got stopped by the police a couple of times,” says Shirley, “wondering where his helmet was, and where he was going.” He arrived safely, his parents none the wiser. “It was quite funny,” says Shirley. “Not then, but after the years passed.”

Little Bradley was the target of bullies in his early years and his brothers were fiercely protective. “Travis was always right beside Bradley. He’d walk him to and from school to make sure he was okay,” says their mother. “He started this protector thing many, many years ago.” His friends sometimes called him that: “the protector,” the kid you could count on to be there for you. “It was just his loving heart,” says Shirley, “and the way we brought him up, I hope.”

Travis graduated from Grade 12 at Spruce Grove Composite High School. He’d grown to a strapping six foot three, with piercing blue eyes and an incandescent smile. He loved camping, playing hockey and other sports, and all that the Alberta outdoors offered. “Travis was always willing to help anyone, rain, shine or snow,” says his friend Britanee Regel. Shirley remembers a late-night phone call when Travis rushed to Edmonton to help a friend stuck in a snowy ditch. He arrived and got stuck, too. They walked for miles before they were able to catch a ride back home.

He’d sometimes hunt deer, moose and elk with his dad and brother Dan, but his greater skill was in butchering the game for the table. He also absorbed his father’s skill as a mechanic, though he had no formal training, and the two would often be found poking under a vehicle hood. “He could have the cheapest car possible,” his mother says, “but he always had the biggest stereo.”

Travis married a local woman, Ashley Batdorf, and two daughters followed in short order. While the couple separated, they remained close co-parents. Travis lived for the weekends when he had his two young daughters, Phalynn Jade and Addison Skye. “Being a father was his greatest joy and accomplishment in his life,” says Shirley. When he recently dated Sam Dekinder, he became “dad” to her daughter, Faith, too. Travis worked for a local truck accessories company and, to supplement his income as a young father, he took a job three years ago as a bouncer at the Old Stony Bar in Stony Plain.

His mother was uncomfortable with the job. But friends say that, with his genial nature, he was well-suited to the task. He had a favourite saying that served him well when someone was angry or sad. He’d put a hand in front of his or her face and bring it upward as if pulling it into a smile. “Fix your face,” became his tag line. His friend Sherilynn Powers had also worked at the Old Stony Bar. After years of trying to conceive, she discovered this summer she was pregnant and went to the hotel with a group of friends, Travis included, to celebrate. He regaled her with the joys of parenthood, offered his services as a babysitter, and complimented her on her new shoes. “When it was time to leave, I found that my poor pregnant feet had swollen in my four-inch heels,” she says. Travis piggy-backed her to the truck. “He told me to wear flats when he wasn’t around to carry me.”

In the early hours of Sept. 28, a fight erupted outside the bar. Travis was attempting to break it up when he was punched and fell to the ground. He never regained consciousness. He was 30. A 19-year-old has been charged with manslaughter.

A memorial service drew more than 1,000 people to the Stony Plain Pavilion. Attending was a woman Travis never met. She’s the sister of a man who is the recipient of one of Travis’s donor kidneys. “Because of your generosity, you gave my brother his life back,” she wrote in tribute. “That’s him giving,” Shirley says, “even after he’s gone.”