Tricia Smith on how she'll clean up the COC

Tricia Smith, head of the Canadian Olympic Committee, on repairing the COC, the track and field doping scandal and what's ahead for Canadian athletes in Rio 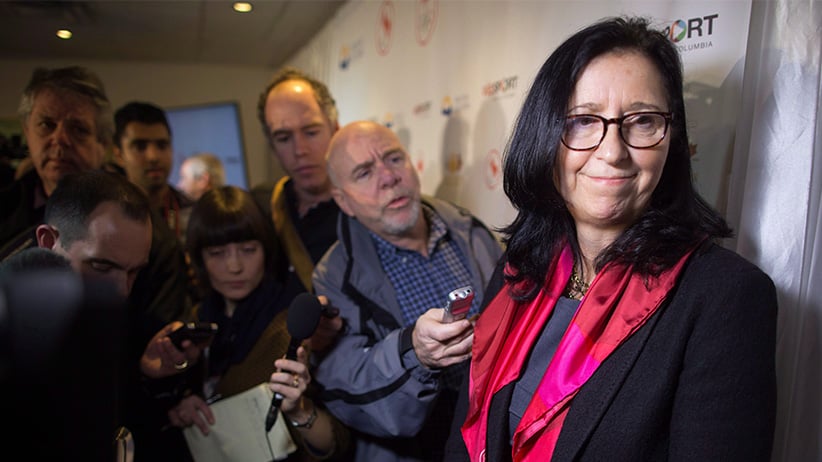 Canadian Olympic Committee President Tricia Smith, right, is stopped by a media relations manager and escorted away from a scrum as reporters ask her questions after an announcement at the Richmond Olympic Oval in Richmond, B.C., on Friday February 5, 2016. (Darryl Dyck/CP)

Tricia Smith wanted to be the head of the Canadian Olympic Committee, but not exactly under these circumstances. The runner-up for the president’s job in the organization’s 2009 election took over the reins last fall, when Marcel Aubut abruptly resigned following a sexual harassment complaint. Aubut later apologized for his behaviour, but left behind a considerable mess, as detailed in an independent report released in February. Smith, a Vancouver lawyer, four-time Olympian and winner of a silver in coxless pairs rowing at Los Angeles in 1984, spoke to Maclean’s about the COC’s current challenges and the road to Rio.

Q: The COC has been in the news for all the wrong reasons since your predecessor, Marcel Aubut, was forced to step down last fall. How has that affected the organization?

A: We’ve taken the opportunity to make some significant changes. We did the review to find out what happened and to make sure it didn’t happen again. We’ve acted on all eight recommendations from the Thomlinson report and done more—hiring human resources and governance experts, and we have five new board members. All of the board and staff are taking a respect course. It was a wake-up call, not just for us, but a lot of organizations.

Q: You’ve said ‘mistakes were made’. What were the principle ones?

A: I think you have to keep up with the times and make sure that everyone in your organization is educated as to what your policies are. What we learned is that you can have the best policy in the world, but if it’s not being used you can’t just assume that there are no issues. We did have a good policy, but to use it was quite intimidating. And on the governance side, the role of president wasn’t as clearly defined as it should be, allowing the past-president to take on other roles in the organization that weren’t perhaps best practice. The policies have to be accessible and there has to be education about just what harassment is. It can be anything from bullying to nicknames to sexual and personal harassment.

Q: The behaviour, as described in the media and the independent report, clearly crossed the line. So what was holding people back from complaining about it?

A: For the report, we let people come forward anonymously over two-and-a-half months, because there was a lack of trust in the organization. It’s difficult when you’re a young employee to come forward.

Q: You were the COC vice-president and had been on the board since 2009. Did you personally have concerns about Marcel’s behaviour towards female staff and athletes?

A: We had a harassment policy and nobody came forward. And as I have said since day one—it was never brought to the attention of the board. And that’s an issue. It was never discussed by the board.

Q: Despite the 2011 meeting and letter [in which Aubut agreed to refrain from touching, kissings and sexual innuendo]?

A: That letter never got there. That’s something the review looked at. Listen, we own it. We’ve made the changes. And now we want to get back to our core values in terms of what the Olympic movement should be about. And if there’s something positive here, it’s that it shines the light on this as a broader social issue.

Q: Still, not everyone has been happy with the pace and scope of the COC’s response. Your chef de mission for Rio, Jean-Luc Brassard, resigned in protest last month, saying more people should have lost their jobs. Why didn’t they?

A: I look at it more as a truth and reconciliation process. And once the president left, and the review was going on, we could see it was already better. The staff was telling us it was better, and we knew we were going to being making big changes. We needed some stability to do that. We weren’t going to blow up the entire organization. But that doesn’t mean we’re finished. We’re changing the culture and everyone has to be on board with that. 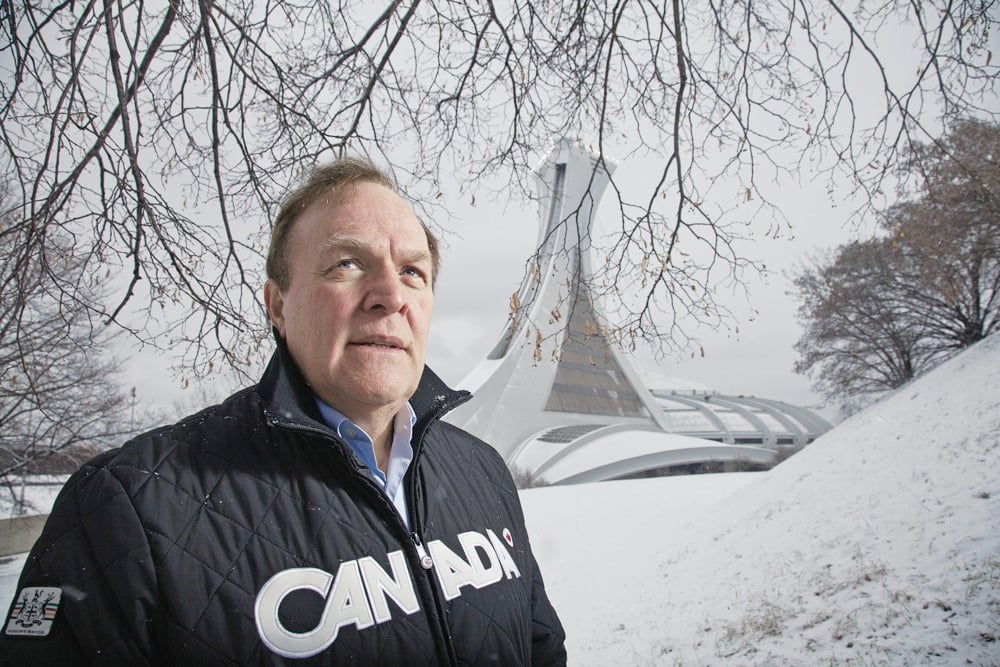 Q: So, let’s talk about the actual Olympics. What are your expectations for Rio?

A: I’m so excited about Rio. We’ve got an amazing team for Rio, over 300 athletes—bigger than in London—and we still have more to qualify. We’re going into the Games with over 20 World Championship medals—more than we had in London. So, touch wood, but I’m optimistic. I’m not sure how many medals, but we’re hoping for a top-12 finish. We’ve got women’s rugby, and basketball, and men’s field hockey, all teams we don’t usually have. And we’ve got a fantastic track team and great wrestlers and rowers and swimmers.

Q: More medals than the 18 Canada won in London?

Q: It’s less than three months until the start of the Games, and so much of the focus is on other problems in Brazil. Last week, Amir Attran, a professor from University of Ottawa, published a piece in the Harvard Public Health Review saying Rio should be cancelled because of the danger that visitors and athletes will spread the Zika virus around the world. What’s your reaction?

A: We’re watching that very closely, and so is our chief medical officer, and the World Health Organization and the IOC medical team. We’re very aware of these reports and we’re following the advice from our experts. The health and safety of our athletes is first and foremost. And right now, we still believe it’s safe to go to Rio.

Q: What specific advice do you have for Canadian athletes?

A: Take all the normal precautions. Wear long sleeves, use DEET, put screens on the windows. And for female athletes who are thinking of having children, they should talk to their doctor.

Q: Of course it’s not just Zika. Brazil is in the midst of a political and economic crisis and there’s been some social unrest. Rivaldo, the former soccer star, is warning visitors to stay home. Are you worried about the overall security situation?

A: There are always these kind of stories in the run-up to the Olympics—although the concerns here might be broader. But we’ve got our experts on the ground and we’re listening to their advice. And we’ll make whatever decisions we have to. But I was there last summer for a test event and it came off really, really well. And we’re told that the venues will be ready.

Q: In the broader Olympic movement, there’s a crisis in track and field over doping and corruption, involving countries like Russia and Kenya, and allegations that many other sports are also dirty. Is there going to be a level playing field for Canadian athletes in Rio?

A: Listen, this is a volunteer job and some friends have asked why I’m taking it on. And the answer is, because it’s important. I’ve seen the difference the Olympics make in kids’ lives. It inspired me. And it unites a nation, like it did in Vancouver—all the athletes were proud to be Canadians, and all the country was too. The Olympics is the pinnacle. You’ve got 10,500 athletes in the same place. It’s like the best ballet you’ve ever seen, or concert you’ve ever heard. There’s magic. That’s why we have to fight the doping and the betting. If you don’t fight for the things that are good, we won’t have very many of them left in the world. I really believe that.

Q: Maybe you knew then, or it’s knowledge you gained afterwards, but you competed against a lot of dirty athletes. Has that changed the way you feel about your own accomplishments?

A: I’ve thought about that of course, it’s all been documented, and the East Germans were always in our event. Often, my partner and I were the only Western crew in the final. So, we were always up against it, but we beat them, at times. I have a lot of of silver and bronze medals too, but I’d do it all over again. 1976 was my first Olympics, and my sister was there too as a swimmer—she won a bronze. That’s 40 years ago now, but I still remember the Opening Ceremony. We marched to the stadium through the park and there were people everywhere, with flags, cheering. We went under the stadium, into the dark and cold, and then came up the rise and I could see the light. And as soon as the Canadian flag went up and they said ‘Canada,’ there was just this roar. That was worth the price of admission.