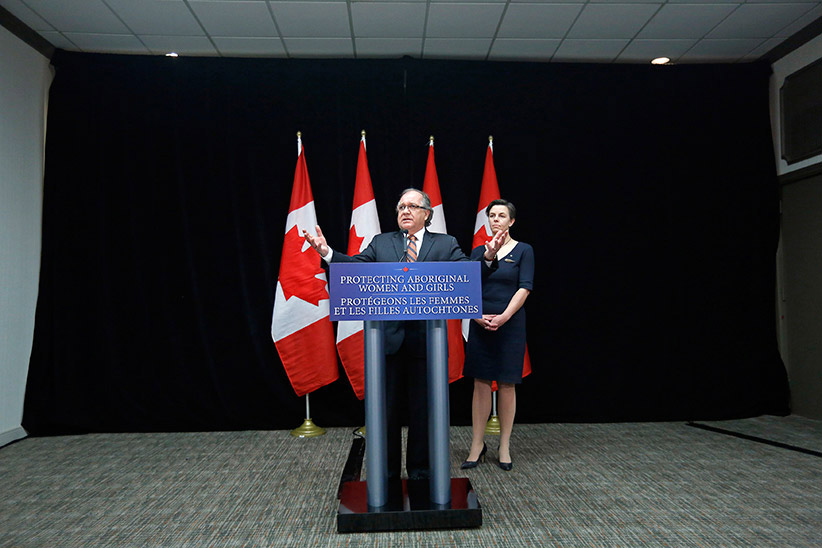 How the heck did Bernard Valcourt get himself into a fix like this? In a March 20 closed-door meeting with a group of western First Nations band and region chiefs, the federal Aboriginal affairs minister apparently got defensive when the issue of missing and murdered Aboriginal women came up. Valcourt pointed out that an estimated 70 per cent of murders of indigenous women are perpetrated by indigenous men.

The chiefs knew that there was no such finding in the RCMP’s “operational overview” of the topic issued last year. It was, indeed, a noticeable gap in the report. The RCMP had strongly disavowed any ability or desire to make factual assertions about the racial demographics of a subset of murderers. So the chiefs very understandably asked Valcourt where this number had come from, and the minister was left babbling that he would come up with something. Whatever goodwill had been present in the room was gone.

A cynic would say Valcourt had committed a breach of the delicate manners that prevail in face-to-face talks between a minister and the leadership of his clientele. It would be equally valid to say he had failed to show sufficient respect. “Manners” and “showing respect” are two names for the same thing, and it is a thing that cannot be shrugged off by a federal minister of Aboriginal affairs.

Valcourt has since obtained a letter from RCMP Commissioner Bob Paulson saying that, yes, there are RCMP data “confirming” the 70 per cent ﬁgure. Predictably, that hasn’t cooled the controversy: it has only inflamed it.

When the RCMP released its original report on violence against indigenous women, it let the data do the talking. That was both salutary and, from a public relations standpoint, effective. We learned that there is a surprisingly high number of genuinely missing Aboriginal women, few of whom can have disappeared voluntarily. We learned that fatal violence against indigenous women is declining, though not quite as fast as in the rest of the population. The police were careful to note that they solve homicides of Aboriginal women just as often as they do those of other women.

The interpretation of all that information was bound to be contentious. The special problem of “missing and murdered Aboriginal women” does not seem to exist, if by that phrase you mean a statistical interaction that goes beyond Aboriginal-ness and female-ness. The overall risk to Aboriginal women is about what you would infer from just combining the (very high) general Aboriginal exposure to lethal violence with the (much reduced) general female exposure to it. No third, additional element of risk is apparent in the numbers: over the 1980-2012 period covered in the RCMP report, for example, StatsCan estimates that 14 per cent of all female murder victims were Aboriginal, but 17 per cent of male murder victims were.

The lack of a statistical smoking gun makes an emotional debate more complicated—but at least with the original RCMP report, Canadians, Aboriginal and non-, were exposed to the numbers in a properly documented and footnoted form first. Now the government has introduced new data in a discouragingly improvisational way, without the details of how the 70 per cent number for Aboriginal offenders was arrived at.

Some, like Aboriginal law professor Pamela Palmater, are opportunistically nitpicking at the number—and they have every right to to that, as long as the methodology and the accuracy of the figure are undocumented unknowns. It’s not really even a question of right. There is just no way for anyone to answer those critics, aside from waving Paulson’s letter around.

But other Aboriginal leaders are asking: if the figure is accurate and robust, and if it implies that Aboriginal men have a special responsibility to act on this issue, why did they have to find out from an offhand remark in a meeting? Why did the RCMP pretend not to concern themselves with the identities of perpetrators, then change their minds?

The 70 per cent estimate may turn out to be in the neighbourhood of the truth—the “offender-to-victim relationship” stats for female homicide victims in the original RCMP report suggest that it might not be far off. But there is not much to be made of that number in isolation—is it high? Low? What percentage would be “too” high? The operational overview established that homicides of Aboriginal women aren’t committed disproportionately by strangers, so we already knew that protecting those women isn’t a matter of breaking up some racial conspiracy or spree-killing gang. Would that it were so simple.