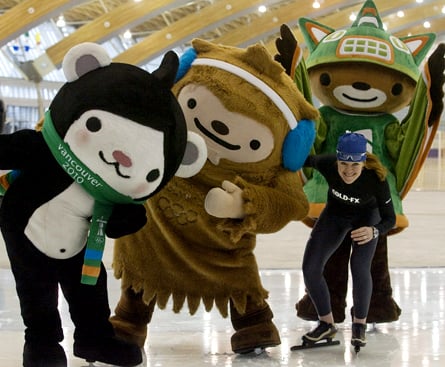 ‘Paint the Town Red’ is a new campaign to stir up patriotism and excitement between now and the opening of the Vancouver 2010 Winter Games next February. Expect red-clad Winter Olympians popping up everywhere, including the cereal boxes of Canadian Olympic Committee (COC) sponsor General Mills.

Red, unfortunately, is also indicative of the economic hit the COC took in the stock market in the current economic downturn. Chris Rudge, CEO and Secretary General of the COC, says the organization’s invested endowment funds have lost millions. The fund was at $110 million going into the downturn last year. It has collapsed to between $85 million and $90 million, depending on market fluctuations, low enough that the COC has stopped drawing on the fund to protect the capital, he said.

But he assures that the spending cuts won’t impact the Vancouver Games. “Everything is in place, we haven’t had to modify our sports programs at all,” he said in an interview at the close of an Olympic Excellence program that brought some 95 Olympic hopefuls and their coaches to Vancouver for four days of meetings, Games preparation and a chance to be poked and prodded by Canadian and U.S. networks and print media.

The losses have, however, caused the COC to reign in spending for the next budgeting quadrennial, a four-year span including the Summer Games in London and the lead up to the 2014 Winter Games in Sochi, Russia. “We probably are down around 15 to 20 per cent in our operating budget, so we have cut in our quadrennial but not in areas affecting sport. Our No. 1 mission is to make sure the athletes are well supported,” he said.

The COC endowment grew from a $53 million surplus from the 1988 Calgary Winter Games. The COC had been drawing three or four per cent a year from interest income until the market went south. Rudge admits the Vancouver Games aren’t likely to turn a profit, though they are projected to break even, after some recession-inspired belt tightening. “I don’t see [a profit] in the plans here, nor has it ever been contemplated that we would have the same kind of financial surplus out of these Games.”

But while Calgary was a financial and organization success, Canadian athletes managed to win just five medals, none of them gold. In Vancouver, the COC is gunning for the top of the medal haul, which would likely require more than 30 medals. Canadian winter athletes won 28 world championship medals this season, more than any other country—due in part to an unprecedented level of financing and support services lavished on Canadian athletes in advance of Vancouver.

Former Olympians like skier Steve Podborski, one of the original Crazy Canucks who stormed the downhill circuit in the early 1980s, can only look on the current level of support and preparation with envy. “We didn’t have the Olympic excellence series,” said Podborski, who won a bronze medal at the 1980 Games in Lake Placid. “We barely had an Olympic team, actually.” The challenge the COC will confront after Vancouver is maintaining the level of government and private financing after 2010, when public attention fades and national pride is no longer on the line.