Vancouver's opioid crisis can be measured in discarded needles

B.C.'s illicit-drug users are going through 15 million needles a year, and a lot wind up in alleys, parks and playgrounds. We followed the guy who picks them up. 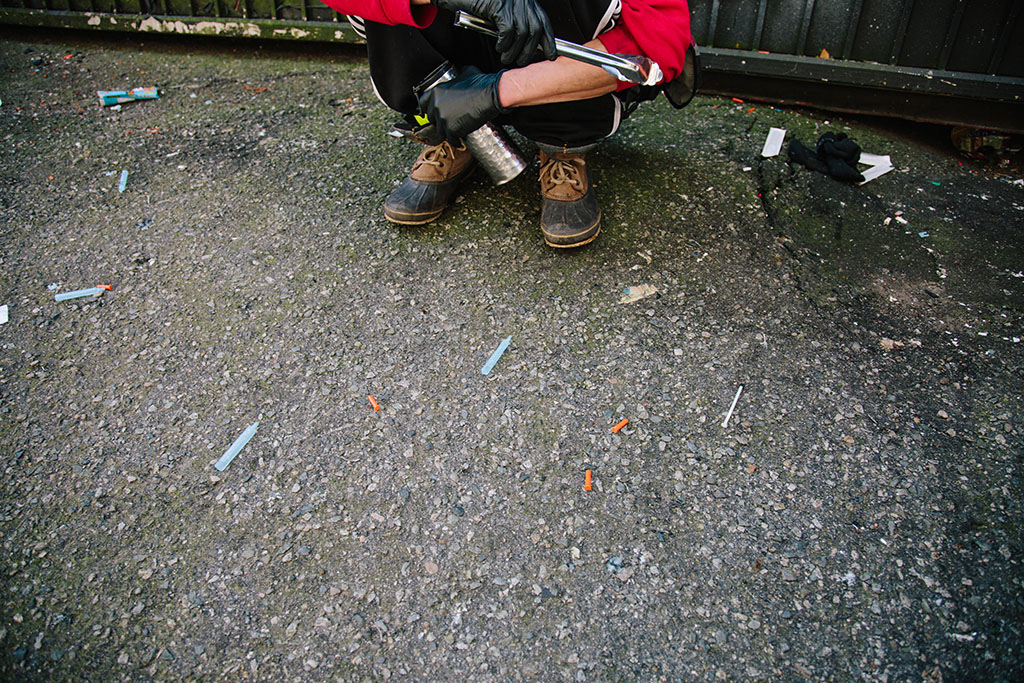 Drug use paraphernalia litters the ground around Nic Crier, Spikes on Bikes volunteer.

Nicolas Leech-Crier steers his black mountain bike into a fetid laneway, the one he calls Crack Alley. It’s a hot zone for outdoor drug use, here in Vancouver’s troubled Downtown Eastside (DTES). Sure enough, we see used crack pipes scattered about the broken pavement. Yellowed and soiled, potentially tainted with infectious disease.

They aren’t a big concern to Leech-Crier. He’s looking for the greater danger: discarded syringes, or “sharps,” used for injecting illicit drugs. There are plenty of used needles lying about Crack Alley. The mission today—and every day, not just in the DTES but in neighbourhoods across Vancouver—is to collect as many as possible, and to dispose of them safely, before they can cause unintended harm.

It might seem a losing battle. Every 24 hours, between 11,000 and 14,000 clean needles are handed over, free of charge, to drug users. And that’s just from a single facility in the DTES; in the same period, tens of thousands more will be disbursed in the neighbourhood, across the city and the province.

Almost 15 million sterile needles meant for illicit drug use were shipped from a warehouse in Vancouver last year to various agencies and facilities around B.C. That’s a 50 per cent increase from 2014, according to statistics provided to Maclean’s by the B.C. Centre for Disease Control, which oversees the distribution.

That may not be enough to satisfy the need. “We are aware that some people are still re-using needles and sharing needles,” says the centre’s medical lead for harm reduction, Jane Buxton. Stigma and shame can discourage drug users from accessing their local needle exchange.

Those who do are asked to dispose of used equipment responsibly. And in fact, the vast majority of used needles are placed inside secure containers at an individual’s residence or street facility, or collected at one of hundreds of exchange facilities, and then transported to local hospitals for incineration.

But far too many are tossed into gutters, in places such as Crack Alley, in parking garages, under bridges, in parks, outside schools. “Sometimes people throw them like darts,” says Leech-Crier, who has seen it all. Such as needles sticking from trees.

In 2015, the number of used sharps found and recovered in Vancouver outdoor spaces was 250,732, according to Vancouver Coastal Health, the local public health service provider. The latest figures are still being tallied. Despite efforts to educate drug users about safe and responsible practices, the discarded needle problem doesn’t seem to be getting any better.

Leech-Crier will collect as many as 500 discarded sharps from an area covering about six city blocks, all in the course of a four-hour shift. He works with Spikes on Bikes, a six month-old, quick-response needle distribution and collection program overseen by the Portland Hotel Society (PHS), the largest social service provider in the DTES, and a pioneer in local harm prevention.

Spikes on Bikes is one of several new initiatives meant to address a drug problem that continues to spiral out of control.

Things were already dire in 2003, when the Vancouver Coastal Health opened Insite, North America’s first supervised injection facility. Offering clean needles and other injection equipment at no cost to clients, Insite still operates from a 12-seat injection facility on East Hastings Street, half a block from Crack Alley. It’s as busy as ever, yet almost an afterthought in the drug scene these days. 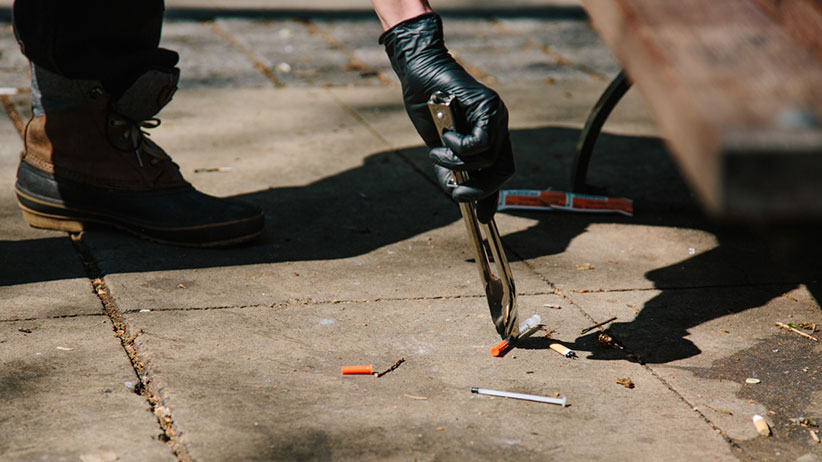 Leech-Crier at work; more than 250,000 needles a year are recovered from Vancouver’s outdoor spaces. (Photograph by Jackie Dives)

A dramatic surge in drug overdoses and deaths from intravenous injection over the past two years—99 fatalities in 2014, 134 in 2015, 215 in 2016, already more than 150 so far this year—has forced the PHS and other agencies to find new strategies and improvise triage; meanwhile, ad hoc groups have been formed to combat what is now acknowledged as a full-blown epidemic, an unprecedented drug overdose crisis. Which is saying something, in this town.

Fentanyl and an even stronger counterpart, carfentanil, are now ubiquitous in the DTES. People who might have managed a heroin addiction for years now find themselves hooked on more these powerful opioids. And they are overdosing, all the time.

Leech-Crier describes a perverse new reality. Some drug users now prefer the stronger synthetics; they actively look for them. An addict who injects, then nods off on the street can elicit more excitement than sympathy from his peers. “When people see someone drop, they go straight to the dealer and say they want some of that,” Leech-Crier says, shaking his head.

We continue down Crack Alley. Leech-Crier uses metal kitchen tongs to pick up the discarded needles he finds. We approach a young man who appears to be high; Leech-Crier hands him some clean equipment. The man drops a used rig into a plastic bucket attached to Leech-Crier’s mountain bike. This harm reduction transaction takes all of 10 seconds.

Leech-Crier returns to base, to the PHS’s main needle exchange facility, located off another alleyway where addicts are shooting up. Some lie passed out on the pavement, blood and puss seeping from open wounds. It’s a frightful scene.

But there’s some good news here. While they might experience an overdose, none of these people will die. They’re close enough to help, to have help find them. The PHS has trained people such as Leech-Crier to recognize and attend to overdose cases; they in turn, teach others to do the same. Naloxone, the anti-opioid drug, is now distributed in the neighbourhood, free of charge.

Inside the needle exchange, Spikes on Bikes co-manager Galen Rigter surveys his inventory: thousands of clean syringes of various sizes, boxes of cooking caps, sterilized water and ascorbic acid packets, tourniquets. He can’t begin to estimate the cost of all these supplies, which arrive every week by the crate load.

He just knows demand for all of this stuff has skyrocketed, and it shows no signs of slowing down.

CORRECTION: An earlier version of this story stated that the Portland Hotel Society opened Insite. In fact, Insite was opened by Vancouver Coastal Health. PHS has a contract to provide administration and peer-counselling support at the site.