She insisted on being called ‘vie’ because it means ‘life’ in French. She devoted her boundless energy to cycling and native youth. 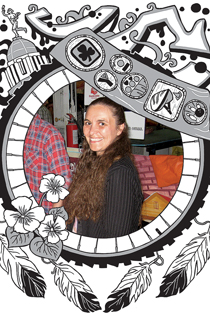 Violet Marion Nelson was born in Swan River, Man., on Dec. 22, 1976, the second of four children to Violet, a homemaker, and Glen, who drove a taxi. The children, including her brothers Eric and Will, and sister Sindy, grew up in Winnipeg, where Violet, who had white-blond locks, loved playing cowboys with her brothers as much as she did dressing Sindy up like a doll. She was equal parts nurturer and energetic tomboy.

Violet insisted everyone call her “Vie,” largely because it means “life” in French. She was generous to a fault, even as a child; her mother scolded her more than once for giving away her toys to less fortunate neighbourhood kids. “I’d give her heck, and ask why she did that,” says Violet. “She’d just look at me—‘They didn’t have any toys,’ she’d say.”

As a student at Faraday School, Vie was a whiz with numbers and an exceptional athlete, bringing home trophies for just about every sport she tried. In Grade 3, she took a liking to cycling after she and Eric took a safe biking course. Sitting still in class, however, was difficult for Vie, who was diagnosed with dyslexia. To help burn up some of her extra energy, her teachers pushed her toward extracurricular activities. At nine, Vie signed up for the Girl Guides of Canada, and by 11, she was volunteering at the YMCA, teaching kids to swim. Despite her success outside the classroom, school remained a challenge. In high school, Vie frequently skipped class, and in Grade 10, dropped out altogether. At 17, she toured Nova Scotia, Quebec and Ontario as a volunteer with Katimavik, the Canadian organization that sends youth to work in community projects.

“She was always looking for things to keep her busy,” says Violet. “She was always volunteering.” Eventually, Vie did return to school. In 2000, she took financial accounting courses at Success CompuCollege School of Business in downtown Winnipeg. Around this time, while working at Western Glove Works in the city’s Exchange District, she met Mike Hodgson. Mike, an electrician by trade, had been called to the factory for a repair, and the two struck up a conversation. Soon, they began dating. Together, they had two children. Asha, their daughter, whose name means “life” in Swahili (a nod to Vie’s own nickname), was born in 2001; Allen, their son, was born in 2006. Vie treated Chaz, Mike’s son from a previous relationship, like a third child.

Family life didn’t slow Vie’s community involvement. Vie was part Cree, and mentored Aboriginal youth. She continued working with the Girl Guides, eventually becoming a district commissioner and founder of the Aboriginal Girl Guides. She also taught road safety to youth. Even after her kids were born, Vie’s black mountain bike remained her primary mode of transportation—she’d pull them along in an enclosed carrier attached to the bike.

Vie shared her passions with her kids, says Jillian Ramsay, a friend and co-worker at Winnipeg’s Graffiti Gallery, a youth community art centre where Vie was finance manager. When she wasn’t taking them bowling, which she did every Saturday, she was organizing biking tours or bringing them to art shows. Her laugh was infectious, says Jillian, who remembers Vie once agreeing to watch Jillian’s dog Beatrix “at the drop of a hat,” allowing her to take a last-minute trip. “She brought her kids and stayed here with my dog,” says Jillian, who joked that afterwards Vie would swing by on her way home “just to snuggle with Beatrix,” a lab-mastiff cross. Although she loved heavy metal and Metallica, Vie had recently become obsessed with ABBA after borrowing the film Mamma Mia! to watch with her daughter. They’d watched it six times, says Jillian. “Before you knew it, her cellphone ringer was Super Trouper,” the ABBA song, she adds. “She was always singing,” says Jillian. “I don’t think it was ABBA she liked, so much as the joy in the movie.”

On May 23, Vie, who chaired the Native Women’s Transition Centre, was cycling to a ceremony marking the opening of a halfway house for Aboriginal former inmates. For years, Vie had been working to get the residence opened; and finally, the day had arrived. Cycling west on Higgins Avenue, she collided with a vehicle in the curb lane, and was thrown beneath a semi-trailer truck. Vie died before arriving at hospital. She was 35.