Want men to support feminism? Stop treating them as the problem.

Scott Gilmore: A new Chatelaine survey shows that men are no longer just a potential ally of women, the vast majority of them are already there 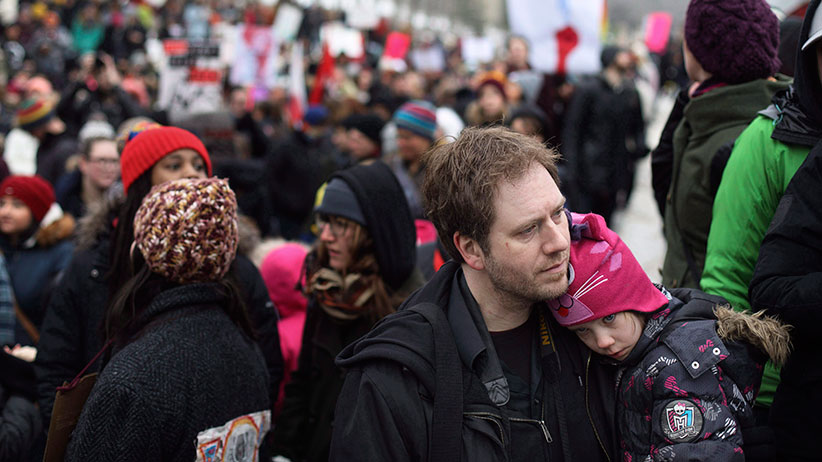 Marchers gather to take part in solidarity with the Women’s March on Washington, in Edmonton, Alta., on Saturday Jan. 21, 2017. (THE CANADIAN PRESS/Jason Franson)

Men are in retreat. In the western world, the high water mark of male dominance was probably 120 years ago. While women had already begun to gain property rights decades earlier, it was the arrival of universal suffrage that heralded a dramatic new age of gender equality. Universities slowly started to open up, followed naturally by professions which began to employ newly graduated law and medical students. The labour shortages of the Second World War added momentum to the social shift, and the mid-century emergence of the women’s liberation movement accelerated the change.

The re-balancing of gender roles is moving even swifter now, with the arrival of the #MeToo movement. Steve Bannon, perhaps one of the greatest champions of the patriarchy, claims it will “undo ten thousand years of recorded history” and that women are now destined to “take charge of society.”

Across the English-speaking world women now outnumber men in higher education. Yesterday the chairman of a Toronto law firm told me about their affirmative action program: trying (and failing) to find more capable male articling students. In every field, at every level, women are making progress. The other side of this coin is that male influence, power and prestige are all in decline.

Objectively, this is good. Men continue to enjoy unearned advantages. Women are still paid less than men. The career impact of child rearing is also much harder for them. Our political and corporate leaders remain mostly male. True equality is still a long way off.

But if we’re going to get there any time soon, we need to stop seeing men as inherently problematic. We now talk about “toxic masculinity”, as though the Y chromosome itself was a poison, the unfortunate byproduct of biology. The implication of the MeToo movement is that if all women have been victims, then all men have been culpable. In progressive circles it is an accepted truth that simply being male makes you part of the problem, an inevitable contributor to the status quo.

And, I confess, occasionally I buy into this narrative, too. But a sweeping survey of Canadian men, released today by Chatelaine magazine, has me questioning that assumption. The survey, conducted by Abacus Data, asked men a wide range of questions about their careers, relationships, fears and emotions, and the results surprised me.

For example, 75 per cent of men believe their partner’s career is as important as or is more important than their own; 87 per cent either didn’t care or preferred their boss was a woman; 79 per cent believed in equal rights for women. While 57 per cent were raised to think “being physically tough” is what it meant to be a man, 64 per cent now believe “being fair” is more important.

The Chatelaine survey reveals men are far more aware, sympathetic and helpful than the caricature of the “typical man” that dominates our conversations about gender equality. It shows that each generation has become more supportive of equal rights than the previous. As a result, men are no longer just a potential ally of women, the vast majority of them are already there.

In 2018, men of all ages and all across the country, married or single, educated or not, are far more feminist than ever before. This needs to be acknowledged. The struggle to transform our institutions, our politics and our culture will succeed much faster if more men join the fight. But if you want an ally, you have to at least acknowledge they’re on your team, not your rival.

It is easy predict that this column will spark accusations that I’m a condescending, sexist paternalist. It will immediately be labelled as “mansplaining”. Ironically, this only helps to prove my point. Like millions of other men, I believe strongly in gender equality, in pay equity, in equal opportunity. But I’m far less likely to join the march when I’m dismissed as part of the problem, as just another ignorant obstacle to be overcome. And I’m not alone. Perhaps the most remarkable finding in this survey was that even though the men polled overwhelmingly shared feminist values, only 18% were willing to describe themselves as a feminist.

This may seem precious. Men have almost nothing substantive to complain about, and to moan that we deserve praise just for not being sexist looks a bit rich. But human psychology is what it is. If you want men to call themselves feminists, to join the fight, to do more, then it’s time to acknowledge they are not their fathers. And for that they should be given a hand, not a wagging finger.