Watch ‘The Notebook,’ save your marriage 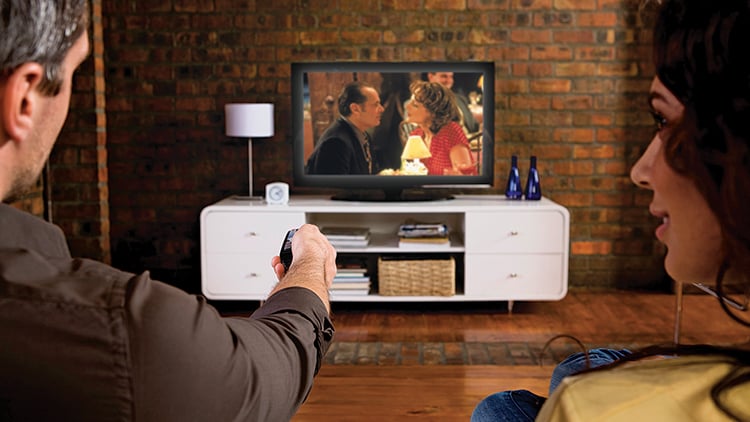 Few pastimes are more typical of coupledom than curling up and enjoying a movie together. But a revolutionary new study shows that this small act—watching and reflecting on, say, Gone with the Wind with that special someone—can actually save a relationship from apathy or dissatisfaction.

Recently, Canadian and American researchers conducted a three-year experiment looking at ways of preventing divorce in which they had couples view five Hollywood films per month and discuss how each one related to them. The films were all about long-term relationships, and the researchers made a “shocking” discovery, says Ronald Rogge, lead author: The couples’ chances of breaking up were cut in half compared to those who did not participate in any marriage therapy (11 per cent vs. 24 per cent). Even more surprising: The “movie treatment” was just as effective at reducing divorce as spending the same amount of time in formal marital workshops focused on improving conflict management, empathy and communication. “The idea that this is a potential low-cost, easy, readily available option is really important,” says co-author Rebecca Cobb.

In a society fixated on pathologizing every bad habit, and where commitment “for better or worse” is increasingly scarce— a quarter of marriages dissolve within three years—the lesson is heartening. It seems that, with a little guidance and lots of motivation, many people are quite capable of overcoming romantic problems on their own. “Maybe we don’t need to teach couples anything,” says Rogge, a psychology professor at the University of Rochester. “Maybe a lot of couples already know what they’re doing right and what they’re doing wrong—they just need to take time out of their busy lives and put effort back into their relationship.”

In creating the movie treatment, Rogge and his colleagues were studying how “relationship awareness” affects satisfaction levels over time. Couples watched any of 47 movies shortlisted by the researchers and, after each viewing, they talked through the same questions, which explored how they compared to the characters: Did this couple in the film strive to understand each other? Did they accept one another, even if they were different? How did the couple handle arguments? Did they try to use humour to keep things from getting nasty? Did the couple in the movie do considerate things for each other? Did their apologies seem sincere?

Rogge says “the magic lies [in] using the movies to ease into discussions” that would otherwise be “scary and threatening.” Adds Cobb, a psychology professor at Simon Fraser University: “It’s not the movie-watching per se. It’s actually being able to engage in meaningful conversation [that answers], ‘What behaviours did the couples in the movie do that we don’t want as part of our relationship dynamic?’ ”

Those behaviours are as wide-ranging as the movies, which include classics such as The Thin Man, Two for the Road, Barefoot in Paris, On Golden Pond, and contemporary films such as American Beauty, The Notebook, Couples Retreat, Date Night, Don Jon and Her. (A full list of recommendations—which has been expanded since the study was conducted—and discussion questions are posted at couples-research.com.)

Rogge and colleagues deliberately chose movies in which the characters were grappling with issues that go unnoticed or just don’t exist during those fuzzy falling-in-love days. Alcoholism, codependency and manipulation play out in Days of Wine and Roses; opposing political views threaten a couple in The Way We Were; Indecent Proposal addresses infidelity; and Yours, Mine, Ours features a blended family. “Obviously, some of these movies are going to be more or less relatable,” says Cobb, but the broad themes are universal.

The study, published in the Journal of Consulting and Clinical Psychology, only included engaged and newlywed couples; a follow-up study is now under way using couples who have been together for various periods. While the researchers believe marriage workshops and therapy are important, they expect the movie treatment will work for many couples. They just have to agree on a movie first.