Exhibit A: 'They spent the whole night trying to drown one another.' 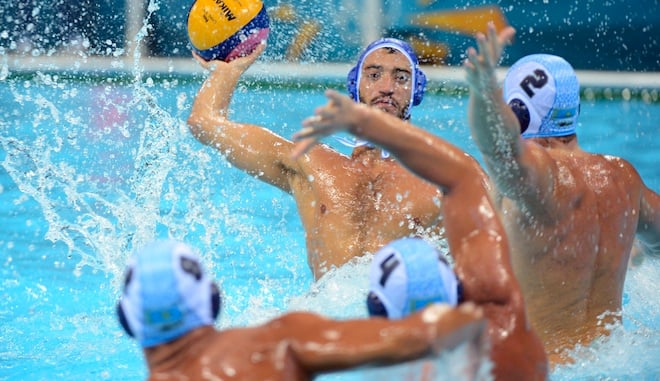 The London Games are truly the public transit Olympics. There’s no way to get a car or taxi anywhere near the main green. And the media buses crawl through the capital’s traffic, even with all those dedicated lanes. So the fastest route between most of the venues and Maclean’s semi-suburban headquarters has proven to be The Javelin, the new high-speed rail link to the centre of the city, then a tube ride home. The train trip only takes six minutes, but it’s long enough to eavesdrop on some interesting conversations.

The other night on the 10:06 to St. Pancras International (named after a 14-year-old Roman who converted to Christianity and was beheaded for his trouble in 304 A.D., in case you’ve ever wondered) it was a doozy about water polo. One couple had been to the swim finals and witnessed Michael Phelps make history, capturing the 18th and 19th medals of his Olympic career. But the rather posh pair across the aisle hadn’t been quite so lucky. They’d seen some preliminary men’s water polo action.

“We know absolutely nothing about the sport,” the man admitted in a decidedly plummy accent. “They were the only tickets we could get. But I gather it’s rather big in the Balkans.”

His wife seemed at once bemused and horrified by what she had experienced. “They have a naughty pool where they send players who’ve been bad,” she marveled.

But the biggest shock was apparently how the players treat each other. “They spent the whole night trying to drown one another,” said the man. “Especially these two fellows in front of the net. It’s all they did while everyone else passed the ball around.”

“The officials didn’t do a single thing about it,” he complained. “And I know it’s against the rules! The announcer explained it before the match started.”

The train arrived at the station. The couples exchanged pleasant good-nights and went their separate ways.