Welcome to the silly games

For this Olympic host, ‘taking the piss’ is a venerated sport 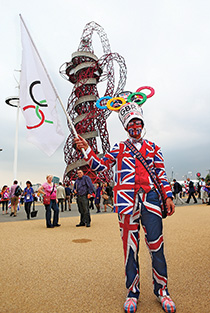 In another host nation, such sarcasm might be disapproved of, if not shut down completely. But here, in the irony-friendly U.K., the caustic volunteer became an overnight minor celebrity, hailed in the Daily Mail as a comedian who had “found her true calling.” If there’s one thing the British understand, it’s the need for humour, even and perhaps especially during the Olympic Games. While other nations (including our own) remain utterly po-faced while hosting a costly spectacle in which human beings “make history” by throwing hammers and playing Ping-Pong, here in Great Britain, “taking the piss” is a national sport in itself. That’s why London 2012, for all its other accomplishments, is primed to go down in history as the Funniest Olympics Ever.

From the outset the Brits have approached the Games with tongue planted firmly in cheek. The hit reality series Twenty Twelve managed to skewer the organizational process as it unfolded, while even the freaky one-eyed mascots, Wenlock and Mandeville, which the U.S. website Gawker recently described as “ugly, wretched, terrifying Cyclopes,” are nothing short of a twisted joke.

In her 2004 book Watching the English, the social anthropologist Kate Fox described what she calls the “Importance of Not Being Earnest rule” which governs all social interaction in Britain. “Seriousness is acceptable, solemnity is prohibited. Sincerity is allowed, earnestness is forbidden . . . The ability to laugh at ourselves, although it may be rooted in a form of arrogance, is one of the more endearing characteristics of the English.”

Republican presidential nominee Mitt Romney disregarded this rule to disastrous effect during a recent visit, when he questioned the London organizing committee’s preparedness. Romney crucially misinterpreted the English sense of humour and the underlying tribal arrogance it belies. While the British love nothing more than a self-deprecating joke (“The Olympics are an absolute shambles!”), they will not tolerate criticism from self-important outsiders. Romney was laughed out of the country by a gleeful chorus for merely saying in earnest what every media outlet had been repeating in semi-serious hysteria for weeks. The Telegraph declared his charm offensive “utterly devoid of charm and mildly offensive,” and even the impeccably polite prime minister couldn’t resist a jab, pointing out, “Of course it’s easier if you hold an Olympic Games in the middle of nowhere” (a reference to Romney’s role as head of the organizing committee for Salt Lake City’s 2002 Winter Games).

By the time Mayor Boris Johnson mounted the stage in front of tens of thousands to welcome the torch, the tone had been set. Johnson, like many silver-tongued, Oxbridge-educated types before him, seems genetically incapable of expressing himself without an undertone of archness. Everything he says, however superficially upbeat or politically portentous, seems laced with irony, as if the man were a knowing parody of the pumped-up politician on a campaign high. In part, it’s his flare for language. “The Geiger-counter of Olympomania is going to go ZOINK!” he declared before half-seriously stoking historic tribal tensions. “ Can we beat France? Yes we can . . . Can we beat Germany? Yes . . . I think we can.” The crowd, of course, went bonkers with delight.

Even the opening ceremonies, generally a spectacle of patriotic pomp, was shot through with giddy eccentricity. If Mr. Bean making a mockery of Chariots of Fire didn’t elicit a giggle, the Queen’s appearance in a movie clip that featured her parachuting alongside James Bond actor Daniel Craig—the most unexpected self-deprecating celebrity cameo in the history of modern entertainment—was sure to leave ’em laughing. Can you imagine the Chinese or Americans poking fun at their heads of state, not to mention their beloved pets, on such an occasion? Inside word is that the sovereign did not need to be cajoled into the appearance either—according to one unnamed organizer, “Her Majesty said yes straight away.” The following day, during a tour of the Olympic Park, she even remarked to Boris Johnson that her comic turn playing herself had been “a bit of a laugh.”

Now that the pageant is under way and the world’s greatest running, jumping, arrow-flinging and hammer-throwing competition is transfixing the world, the host nation can get on with doing what it does best: sit back, have a drink and crack a few jokes on the sidelines.