What can Mike Babcock really do for Toronto?

Yes, the Leafs snagged a big fish in new coach Mike Babcock. But it seems unlikely he'll be able to turn them around quickly—and he'll need to. 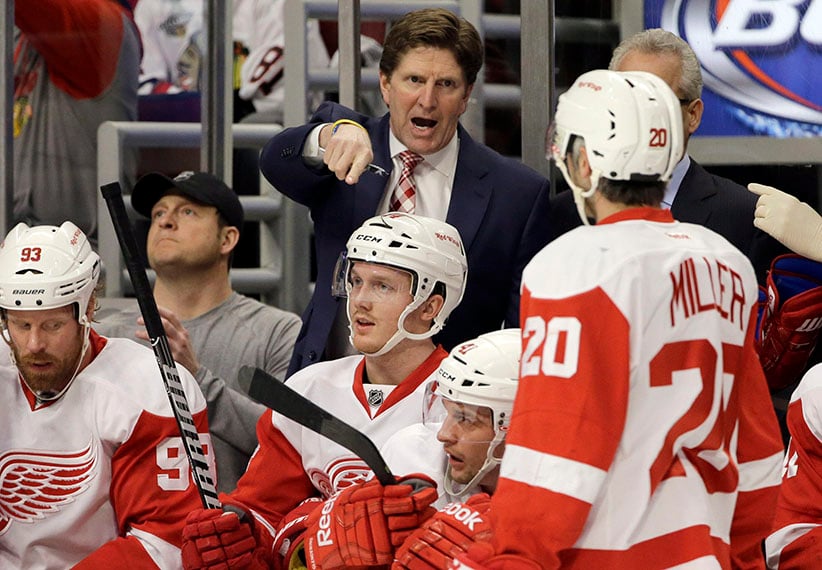 I remember where I was when the Toronto Maple Leafs got Owen Nolan. It was on a school bus, coming back from a camp trip that took place over the 2002-03 NHL trade deadline, and someone had gotten a call from their parents on their clunky Nokia cell phone—which was the style at the time—that the playoff-bound Leafs had dealt for the San Jose Sharks’ franchise player, a legitimate offensive star who would bolster their playoff run. For the first time in what felt like a long time, the Leafs had landed the biggest and best name on the market. And there was an undeniable frisson of energy all throughout the once sleepy bus: This is going to be the year.

Thirteen years later, it’s happening again. On Wednesday, after a long, hyped courtship unlike perhaps any other for a coach, Mike Babcock decided to leave the Detroit Red Wings to man the bench of the Toronto Maple Leafs. The drawn-out will-he-or-won’t-he pursuit was akin to the breathless LeBron James decision, except this was for a man who hasn’t played professionally since 1987. For probably the first time since Nolan, the Leafs snagged the biggest and best name on the market (probably best we forget about David Clarkson, right?). An entire city is ready to anoint this bench boss a saint and franchise saviour. For thine is the kingdom, and the power, and the glory, for ever.

From Sportsnet.ca: Mike Babcock, the perfectionist

To be fair, Babcock is no Nolan. Babcock is a proven winner at every level, a man who has won a Stanley Cup and five gold medals for three different levels of Team Canada international play. He’s endured just one losing season in his 12 NHL seasons as a head coach. And, well, Owen Nolan became a bit of a millstone for the Leafs after that 2002-03 squad eventually bowed out in the first round.

But then, Nolan is no Babcock, either. Nolan, after all, played hockey. Mike Babcock cannot play centre on the Leafs’ top line or provide the play of a top-four defenseman because he is a coach. And Nolan had the benefit of sending the right signal at the right time: His acquisition was a win-now move from a team that saw winning as a possibility. Babcock, with all his championship pedigree, is joining a team in the midst of its lowest moment, a win-now move for a team whose fan base can’t quite remember winning—and that will make it especially hard to provide change in the sport’s highest-pressure market.

And just how much change can Babcock truly bring? Even the best coach—and let’s be clear that, despite the mythos imparted by his gold-medal success, Mike Babcock is merely one of the league’s best coaches, not actually its best, given the continued career of Joel Quenneville—has a negligible effect on any given team. Study after study has proven that, from soccer to hockey, changing a coach rarely provides huge benefit to a team. “In aggregate, the change in coaches had no clear impact on teams’ performance,” wrote NHL Numbers’ Nick Emptage in a 2013 study of six seasons’ worth of coaching changes, adding that any shifts to any advanced metrics, too, were statistically insignificant. Even in the best-case situations with the best coaches, it’s hard to note massive changes: Quenneville’s hire in Chicago, for instance, brought a six per cent improvement in puck possession, one of the most significant increases. But it’s hard to say how much that had to do with him compared to breakout seasons from superstars Jonathan Toews and Patrick Kane, or the offseason pick-up of puck-possession monster Andrew Ladd.

The only surefire way to improve a team is what led to success for Babcock’s old team, Detroit: a steady pipeline of young talent, a stable roster built for its coach, and leadership. There was some overhaul in the Leafs front office this season, and it’s hard to imagine the team could do worse than 26th in the league—but there is no prospect pipeline in place. It will be hard to change the current roster, and there will be few impact free agents available this offseason. And despite the dismissal of the former general manager, the pair seen as the Leafs’ heralds of hope—Brendan Shanahan and Kyle Dubas—are in fact doing the same jobs as they did last year. No matter how prestigious the name, Mike Babcock cannot bring miracles.

And lo, there will be pressure on him to turn the Leafs into wine. To ignore Babcock’s extremely rich contract would seem foolish, but that contract is something of a red herring; it doesn’t count toward the salary cap, and MLSE’s pockets are deep. But unless you believe the organization’s funds are truly unlimited, it will be hard for fans not to dream, even if it’s wrongly, of what else $50 million over eight years—much of it front-loaded, with an out clause after five years!—could buy instead. (Yes, he will be making as much as Dion Phaneuf, who will be his captain—at least for now.) Money comes with expectations, no matter what town you’re in—all the more so in the Centre of the Universe. And when your trademark brand of play is premised in penalty-free skill-focussed hockey—as it is for Babcock—and you’re joining a team where “truculence” was the defining spirit as recently as two years ago, patience is going to be the key word. That’ll be hard to sell when you bring in a man who has at every turn said he hates to lose.

Certainly, Mike Babcock is a good start. Teams should always reach for the best name and the best fit that the market offers. But make no mistake: Mike Babcock is just a piece of the puzzle, maybe even a minor one when it’s all said and done.

Babcock becoming head coach of the Leafs is throwing an expensive Persian rug on top of the skeleton of a broken-down car. Would you still buy the car?