'Not the right fit for me': Michael Friscolanti on the legacy and exit of the Blue Jays architect, who lives by an ego-free approach 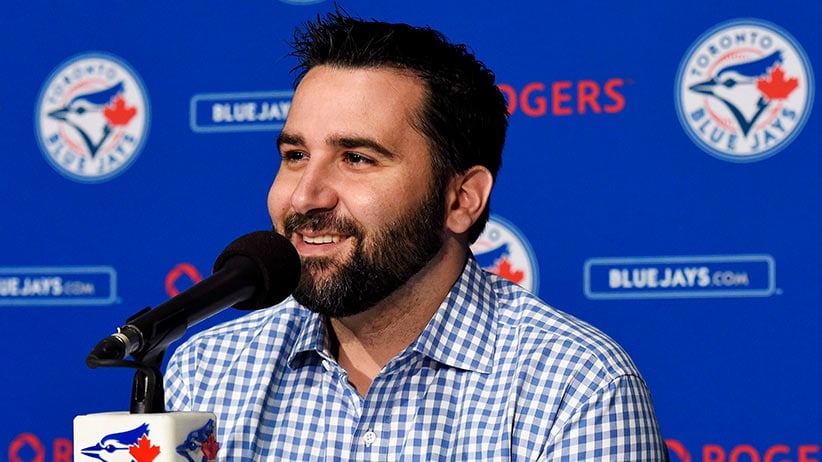 Toronto Blue Jays general manager Alex Anthopoulos speaks to the media regarding his recent trades before the Jays play against the Kansas City Royals during an AL baseball game in Toronto on Friday, July 31, 2015. (Nathan Denette/CP)

This much is true: Alex Anthopoulos had absolutely no business becoming the general manager of any major-league baseball team, Blue Jays or otherwise. He literally forced his way into the game—a front-office version of the un-drafted middle infielder who, defying every odd, makes it to the Show.

This is a guy, don’t forget, who begged for the opportunity to open fan mail for his hometown Montreal Expos (for no pay, on weekends). A guy who asked every scout in the stands at Olympic Stadium to teach him the trade, even though many responded with a cold shoulder. A guy who spent two thankless years volunteering at a Florida baseball academy—soaking up every bit of baseball intelligence he possibly could—before catching his first big break.

A guy whose ego never swelled, not in the slightest, even though it could have.

“This is going to sound arrogant, but I will never, ever, ever, ever get a big head or think I have it made, or think I was born for this job,” Anthopoulos told Maclean’s in March 2011, during his second spring training as Blue Jays GM. “This could be gone tomorrow, and that’s not eyewash or false humility because it sounds good on paper. You know it’s inevitable. There will be a day that, if you’re doing this long enough, someone else will be sitting in this chair.”

For Anthopoulos, that day has come. Fresh off his team’s first post-season appearance in 22 years—a dramatic, bat-flipping playoff run that united a nation until last week’s crushing loss to the Kansas City Royals—fans woke up Thursday morning to the seemingly unthinkable: Anthopoulos, the Canadian architect of that potent playoff roster, is out.

Why? Stay tuned. If the full story spans nine innings, we’ve reached about the seventh-inning stretch.

Related: Q&A: Alex Anthopoulos, the Canadian who rebuilt the Jays

Here’s what is certain: Rogers (which owns the team, and this magazine) offered Anthopoulos a five-year contract extension, which, after much deliberation, he declined. In various press releases, senior company officials said they were “saddened” and “disappointed” by his decision to leave because he “has done a terrific job” since taking the helm in 2010. “Like the fans, we too will miss Alex,” said Rick Brace, the president of Rogers’ media business unit. Added Edward Rogers, team chairman: “Alex has done a terrific job as GM of the Blue Jays over the past six seasons, and we would have loved it if he stayed with the club. Like the fans, we too are disappointed he has chosen not to accept our five-year contract offer, but we wish him the very best.”

Prepared statements aside, initial speculation points to an old-fashioned power struggle: Anthopoulos on one side, incoming Blue Jays president Mark Shapiro on the other.

The team announced in August that Shapiro, a long-time executive with the Cleveland Indians, would replace Paul Beeston, the cigar-smoking president who hand-picked Anthopoulos as GM (a “prodigy,” as Beeston described him). By then, the Jays were all the rage, tearing up the American League after two blockbuster trades, orchestrated by Anthopoulos, landed all-stars David Price and Troy Tulowitzki. But even then—with the stadium sold out, and millions more glued to their televisions—the whispers had begun.

Did Rogers approach Shapiro during the Jays’ early-season struggles, back when a post-season berth seemed a distant dream? Did ownership promise him final say on all roster-related decisions—thus stripping that power from Anthopoulos? Or did Rogers have every intention of allowing the GM’s contract to expire (it does so Saturday) until the team’s stunning late-season surge forced the company to reconsider?

Shapiro officially starts his new job on Monday, and he isn’t talking just yet. Anthopoulos did speak to reporters, but his 45-minute conference call Thursday afternoon only added to the mystery surrounding his sudden departure. “Obviously, everyone knows how I feel about the organization, the city, the country,” he said, his voice cracking at times. “It’s hard to leave this staff, but I just felt this was the right thing for me at this time.” (In a cruel twist, The Sporting News announced—smack in the middle of the conference call—that Anthopoulos had been named Major League Baseball’s executive of the year by a panel of his peers.)

Over and over, Anthopoulos heaped praise on both Rogers and Shapiro, insisting he was given every opportunity to keep his job and was always “treated with dignity, class and respect.” It wasn’t about money, he insisted—Rogers’ offer was “more than generous, beyond my wildest dreams,” he said—and he had no issues with the five-year length of the contract offer. But when pressed to explain exactly why he chose to leave, Anthopoulos wouldn’t bite. “I just feel that you need to make decisions in life and you need to be true to yourself, which is important,” the 38-year-old said. “By no means was this an easy decision. It’s just one I felt I needed to make.”

Is it accurate for fans to conclude that you and Shapiro butted heads over the control of baseball operations? “No,” he replied. “I would never get into specifics, but I never requested anything.”

Were you told that your job responsibilities were going to change? “I don’t want to get into specifics,” he said, yet again. “I know people are going to try to read into things, but I just evaluated things going forward and I just felt like it’s not the right fit for me at this time.”

Why is it not the right fit? Specifics, please. “I guess I just want to keep that private and to myself,” he said. “I’d never want to get into speculation and all that kind of stuff. I think some of those things need to be kept private, but again, if anything, all I have is praise.”

Related: ‘Love isn’t about expectation.’ An ode to the 2015 Blue Jays

He “can’t stress” enough how well he’s been treated.  Shapiro is “first-class,” he said, and he’s “extremely appreciative” of the way his contract situation was handled. Yet here he is, packing up his desk and saying his goodbyes. Clearly, somebody blinked.

“I own this decision,” Anthopoulos said. “This is on me, 100 per cent. Mark did everything he could for me to stay, ownership did everything they could for me to stay, and I’m extremely appreciative and grateful of that. I can’t speak highly enough of what they did, so I think the fans need to know that this was a decision I had to make. I don’t know that I’ve had to make a harder decision in my life.”

In hindsight, maybe all the signs were there. Maybe Anthopoulos knew, many months ago, that his Toronto tenure was about to end. As the playoffs rolled along, he talked cryptically about “soaking it all in,” about the importance of allowing himself a few moments to be just a fan, not the GM. When the Jays captured the American League East pennant, he repeatedly pointed out that no matter what happened from that point on, no one could take that banner away from him. He sounded like a man who knew he might not get another chance.

For now, Anthopoulos is going to spend some much-needed downtime with his wife and two young children before weighing the opportunities that will undoubtedly come his way. If he wants, he can also catch up on some fan mail. His own, this time.