What happens if alcohol and marijuana mix?

It’s best to stick with one or the other. If you do mix the two, it’s safer to drink first. 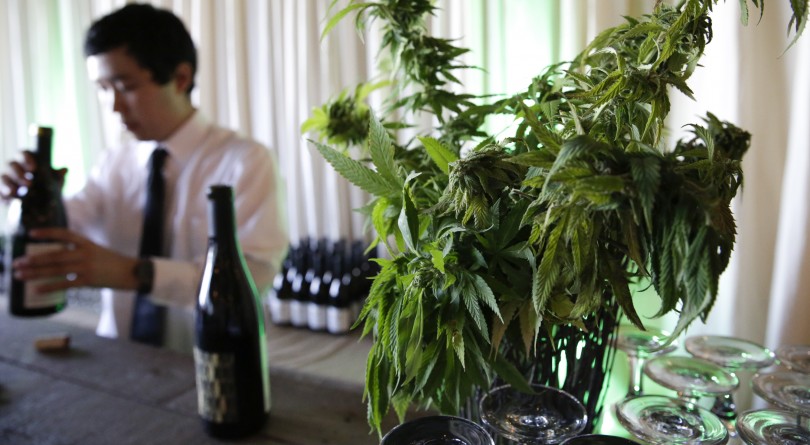 A marijuana plant is pictured as a bartender opens wine at a cannabis food event in Tacoma, WA, on July 19, 2016. (JASON REDMOND/AFP/Getty Images)

Health experts warn that mixing alcohol and pot can be dangerous, particularly if the marijuana is smoked or consumed first. Marijuana has anti-nausea properties, which are beneficial for cancer patients, but not great if those same properties are preventing someone who has downed too many drinks from vomiting. It’s best to stick with one or the other. If you do mix the two, it’s safer to drink first. Surveys also show that people who drink and toke at the same sitting are more likely to drive impaired.

Given these warnings, how is it that marijuana cocktails are all the rage and craft brewers are now working on pot-infused beer? The beverages being sold or designed contain either alcohol or THC (one of the active ingredients in marijuana), but not both. In the United States, beer is being brewed with hemp for those who enjoy the taste, but the buzz comes from alcohol. Here in Canada, Province Brands has a patent pending on technology to make a non-alcoholic beer brewed from entire pot plants—which will get you high, if and when it is legal and offered for sale. And for the DIY crowd, there are endless recipes for THC-infused alcoholic cocktails you can make with cannabis oil at home. It’s a powerful mix, and caution is advised.