What happens when five friends win a life-changing lottery jackpot

A bout of good luck (on a Friday the 13th, no less) earned five friends $60 million—but they swear that their joy won't affect their work at Payments Canada 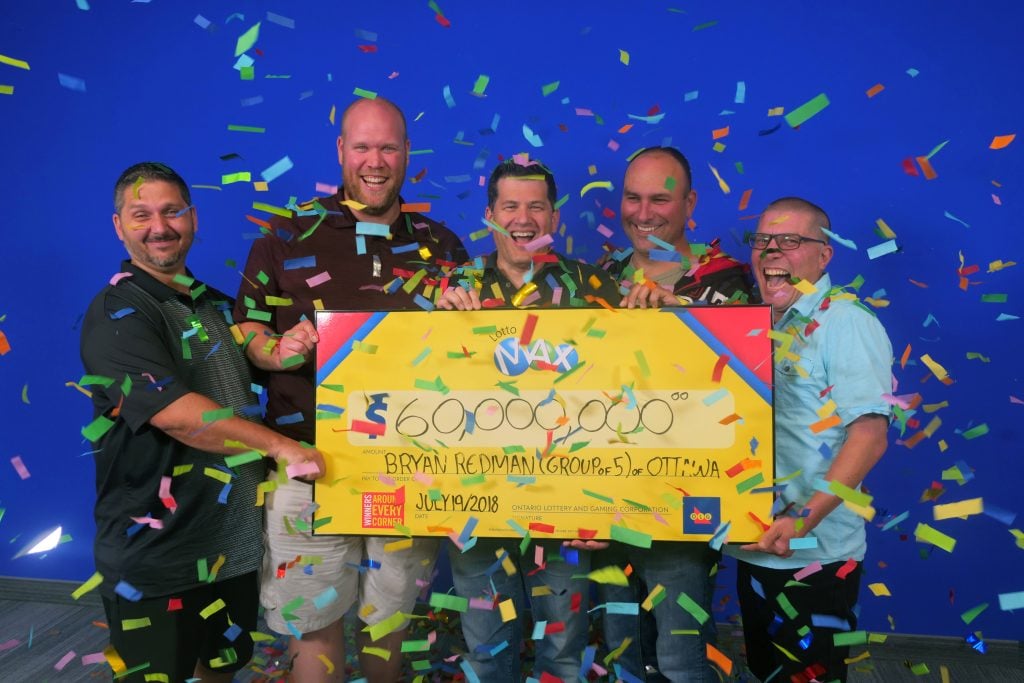 It was Bryan Redman’s turn to buy the ticket, and he nearly forgot.

Redman and four friends who all live in the Ottawa-Gatineau area—Christopher Beazley, Gilles Dionne, Norman MacDonald, Stephane Dionne—had been splitting lottery tickets for a decade, ever since they’d all worked together in IT for the federal government. The five had become close friends, too, travelling together—they were all married and had nine children between them—and socializing outside of work. Each week, they took a turn buying the scrap of paper that contained a series of numbers and a little wisp of hope for everyone.

So on June 13, with his gas tank approaching empty, Redman stopped at a Mr. Gas location in the suburb of Orleans on Ottawa’s eastern fringe and grabbed a quick-pick Lotto Max ticket just hours before the draw.

It would end up being a very lucky moment—on Friday the 13th, no less—for Redman’s car to run low on gas.

“I checked our ticket the next morning on the OLG app and was stunned when I saw $60 million on the screen,” he explained in a press conference later. “I scanned it again immediately because I just couldn’t believe it.” He drove to the nearest lottery outlet to check it again. When the machine confirmed the massive payout, Redman got back in his car, locked the doors and started trying to call his friends. No one was picking up, and Redman was trembling and in tears.

Finally, Gilles answered, woken out of a dead sleep. He heard Redman yelling, “We did it! We did it!” and it took him a moment to realize what “it” was. “I dropped maybe an improper word,” he grinned later.

The five decided to meet up that evening and validate the ticket together at Mr. Gas. A grainy security video captured the group strolling into the store about as casually as one can stroll when you’re pretty sure you’re carrying $60 million. One of them placed a plastic folder on the counter and carefully extracted the ticket, then handed it to the employee behind the counter. He ran it through the machine, then clapped a hand to his mouth like a human surprise emoji and took several steps back from the terminal. The five winners split into open-mouthed grins; one whipped out his phone to photograph the moment, while a couple of others jubilantly swatted at each other’s arms.

The group kept the news mostly quiet for a few days, but the following week, they were scheduled for a press conference at OLG’s prize centre in Toronto. Shortly before they went public, the news rocketed through Payments Canada, an arm’s-length government entity that operates the infrastructure behind the country’s financial institutions; four of the five winners work there, and the fifth used to.

Gerry Gaetz, the president and CEO, happened to be in Toronto for meetings the day of the OLG press conference, and his phone lit up with simultaneous text messages from different people. “I’ve never seen news travel about anything so quickly,” he said. “I was laughing, because I’m very happy for them.” Soon, Gaetz was hearing from various managers at his organization—the four winners work in different departments in technology or security roles—about how they could keep things running smoothly.

Payments Canada employs about 250 people, most in the Ottawa office and about 40 in Toronto. They operate their systems 20 hours a day, and if there’s any interruption—from a natural disaster, say, or “anything that would take down technology or the people running it”—they have to be back up and running within two hours, Gaetz says. He says he’s unruffled about the possibility of losing all the lottery-winning employees at once to early retirement, since making contingency plans for their contingency plans is what Payments Canada does. “Losing four employees—even if they all left together—would be in many respects an easier issue to manage than most of the scenarios we plan for,” he says. But so far, the lottery winners still work there and don’t seem inclined to change that immediately.

An all-staff event had been planned for the Ottawa office the day the win went public, so the company live-streamed the press conference in which the winners shuffled through a doorway and onto a little stage to hoist their giant novelty cheque together.  It soon became obvious that these were not the type of men to impulsively quit their jobs in favour of swimming through a Scrooge McDuck money tank.

They wanted to be smart about it and not spend all the money at once, Gilles said earnestly into a microphone. “We’ve heard the horror stories; we don’t want to be those,” added Stephane. “So it’s just taking the time and processing it and making sure we do the right things and we keep each other’s heads aligned.” A reporter asked, with a whiff of disappointment, “You’re not going to treat yourselves to a boat or anything?” The five winners guffawed like he’d suggested they each buy a domesticated Tyrannosaurus rex and a saddle to ride it. “Not right away,” Stephane grinned. A couple of his buddies echoed this sentiment and someone said, firmly, “Family first.”

Then Gilles smirked and shrugged into his microphone: “Maybe a new house.”

Correction: A previous version of this post had a headline that imprecisely referred to four of the five winners as government employees.