What possesses the non-handy to turn handy at the cottage?

'You’re a different person when you’re at the cottage. The aliens come and take your normal brain away.' 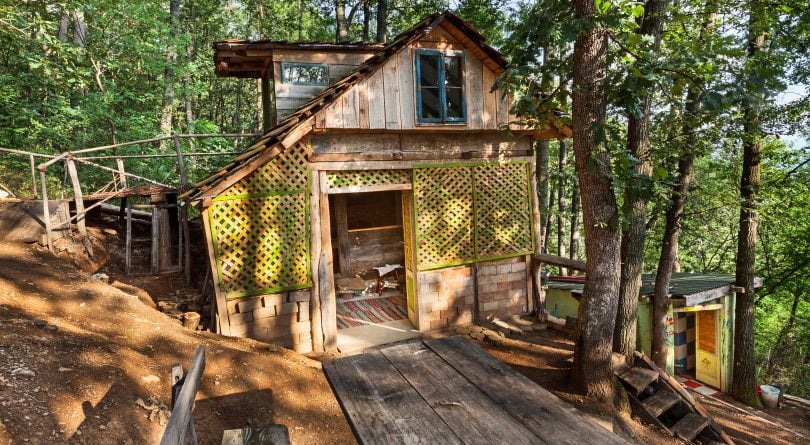 This article originally appeared in the August 18, 2008 issue of Maclean’s under the headline “I can do it, honey”

When Marcus Vichert drove up to his cottage in north Muskoka, Ont., several summers ago, he arrived to find a lopsided house, the result of a do-it-yourself renovation gone wrong. The family had chosen not to put in eavestroughs and rain had caused the cement pads and wooden posts to sink. The rear of the cottage had sunk so far underground the back door was sealed shut. But still, instead of calling a professional, the Torontonian went to his car, pulled out a jack, hoisted up the cottage and spent the next two hours cramming bits of wood into the gap. What possessed the self-described “golf shirt and chino”-wearing urbanite to attempt a task he now acknowledges as “wildly inappropriate”? The same rationale that inspires bankers to fire up chainsaws and lawyers to climb onto roofs in cottage countries across Canada each summer: “You’re a different person when you’re at the cottage,” says Vichert. “The aliens come and take your normal brain away.”

Whether because of bravado, thriftiness or the scent of evergreens, when city dwellers escape their nine-to-five existences, they are willing to undertake projects that would be otherwise unfathomable. “There’s this ideal that cottaging is about self-reliance. There’s a sense that we ought to be able to fix it ourselves,” says Martin Zibauer, deputy editor of Cottage Life magazine. Vichert made it through his ill-advised exploit unscathed, but these forays into physical labour can result in serious injury. And even when do-it-yourselfers escape physical harm, it often takes a professional to clean up the mess their good intentions left behind.

It’s tough to quantify exactly how many Canadians are injured at the cottage each year—in many regions, vacation spots are an easy drive to city hospitals, and emergency rooms don’t necessarily track how injuries occur. But anecdotal evidence suggests it’s not uncommon to seek medical attention after mounting a ladder, chopping wood or putting in the dock. When the population of the cottage country in southern Georgian Bay, Ont., swells from 55,000 to 150,000 during the summer months, the region’s emergency rooms are packed with 40 cent more patients. Likewise, the ER at South Shore Regional Hospital in Bridgewater, N.S., sees a 25 per cent spike in visits during the summer. South Shore ER doctor Christian Pugh attributes this influx in part to the mishaps of what he calls “weekend warriors,” urbanites who attempt significant construction projects at the cottage for practice, or because they’re unwilling to wait for and pay contractors. But he says the price these “whitecollar desk workers” pay often isn’t worth it. The same week he talked to Maclean’s, Pugh had treated a man who broke his ankle while reshingling the roof. He’ll have to undergo surgery in Halifax. Even those who should know better suffer lapses of judgment at the cottage, says Pugh, recalling a fellow physician who cut several muscles in his thigh while using a chainsaw without protective gear, and was off work for months. “People aren’t prepared for how this could possibly impact their lives,” he says.

The concept of “weekend warriors” is one that is familiar to the tradespeople in Canada’s cottage areas. “A lot of people like to come up and take on these projects with half a clue and it blows up in their face,” says Dan Flynn, owner of ADF Plumbing in Dorset, Ont. The tendency of urbanites to attempt their own upgrades, installations and repairs is so common that Flynn makes a habit of attending the annual Cottage Life show in Toronto to familiarize himself with the gadgets he will inevitably be called on to fix. When the installation of a water purification system or a shower stall goes awry, embarrassment ensues: Flynn says the do-it-yourselfer is often absent when he arrives to repair the blunder. Sometimes mistakes can cost dearly. Isabelle Foisy, who manages the Home Hardware in St-Donat, Que., regularly fields calls from cottagers in the Laurentians who have gotten themselves in over their heads. In one instance, the wrong siding had trapped so much moisture that mushrooms were sprouting indoors.

While Flynn may silently shake his head at finding pipes that have been put together with “a Band-Aid and a cigarette,” he never balks at business. Because “once you get that water on for them, you get that toilet flushing, they’re very thankful, and they call you for other work.”