Image of Week: It's not clear whether his doctor prescribed it, but his lawyers sure think he needs it 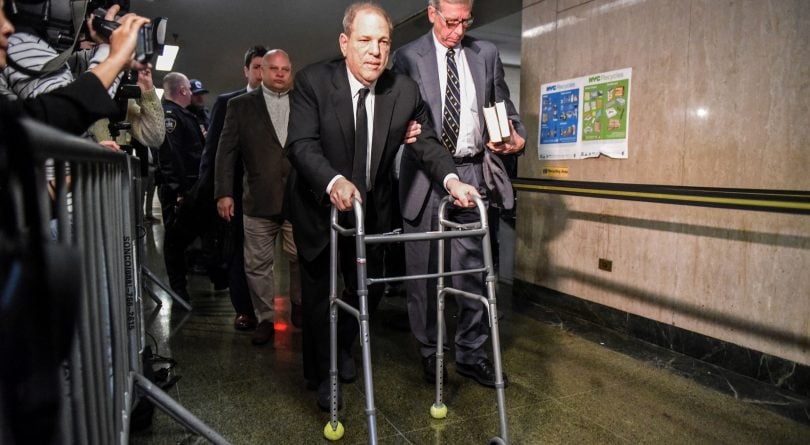 Weinstein on the way into court. (Stephanie Keith/Getty Images)

Harvey Weinstein is no longer a person. He has become a symbol of sexual predation, an Ozymandian benchmark against whom every other celebrity felled by #MeToo will be compared for years to come. In the juries of popular opinion, this will remain true regardless of the legal outcome of his first trial, which begins this week in New York, two years after reports broke of sexual abuse on his part. Weinstein is charged with raping a woman in 2013 and forcibly performing a sex act on another in 2006—just two of the allegations by dozens of women alleging his guilt. On Monday, lawyers in Los Angeles filed another lawsuit alleging four more counts of sexual assault that sound strikingly similar. Weinstein hobbled into the courtroom clutching a bizarrely ramshackle walker studded by cut-open tennis balls, a prop that caused critics to raise their eyebrows. His lawyers claimed Weinstein needs the walker (which at US$49.41 does not appear to be a top-of-line model) because days earlier he underwent a three-hour operation on his back due to a summer car accident. Yet Page Six, a celebrity gossip site, published a blurry shot of someone who looks like Weinstein, sans walker, at a nearby Target. Regardless of that photo’s veracity, any stabs at generating sympathy on Weinstein’s part are probably moot: it’s hard to imagine anyone suddenly changing their minds to feel sorry for a man who was once arguably the most powerful producer in Hollywood.