Who, me? Taylor Swift, famous? Nah.

An everygirl realness is vital to Taylor Swift’s success. But the illusion is getting harder to keep up. 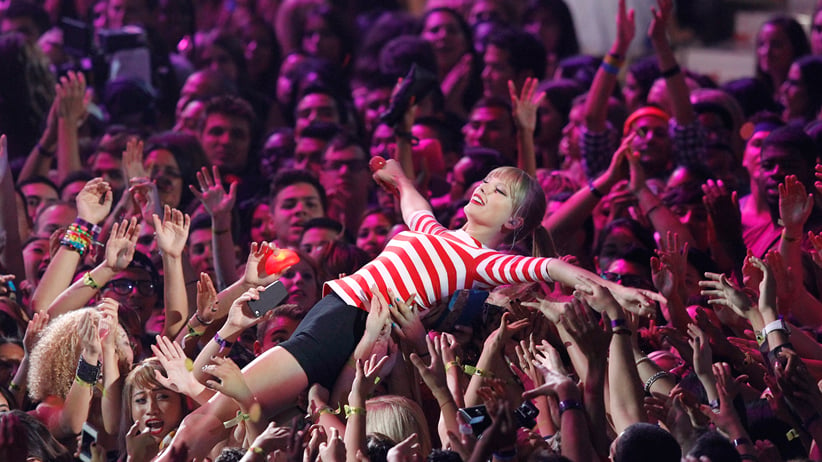 In late September, around the time the Taylor Swift media machine was ramping up to promote her new album (1989, out Oct. 27), the Daily Mail and TMZ reported the singer and her team were being sued by a New York security firm after backing out of a contract they’d signed earlier in the year. The stories included details of Swift’s alleged contractual demands, including specifics of her tour rider (Twizzlers, mac and cheese, and chocolate milk must be provided backstage). But the capper was a set of rules pertaining to when and how her limo driver should converse with her.

The diva-like behaviour is hardly shocking in a pop realm where Jennifer Lopez stipulates an all-white green room (including ivory couches, drapes, lilies and roses). But in the Swiftiverse, there was a ripple of discomfort. This is a fiefdom, after all, where putting on airs is anathema. Since she started performing a decade ago as a fresh-faced, Nashville-based teenager, Swift has positioned herself as an antidote to pop excess and artificiality. That ethos is embedded in her songs, richly detailed and achingly personal compositions that hew closer to Carole King’s oeuvre than to the work of Swift’s pop contemporaries. Her inveterate girl-next-doorness is conveyed through her body language—see her goofy, awkward mom-dance moves in awards-show audiences, or that “Who, me?” expression of shock when she learns she’s won a prize. (There’s a reason “Taylor Swift surprised face” is a meme unto itself.) It’s even part of her backstage act—mac and cheese? Milk? “Realness” is the cornerstone of Swift’s public persona—the reason she’s ascended to such heights at the tender age of 24.

But 2014 marks an interesting moment of tension. Her new record, named for the year she was born and inspired by music from that era, is a rhapsody in synths, her leap away from country and squarely into mainstream pop. (It’s produced by Jack Antonoff, boyfriend of Lena Dunham and a member of the group fun., as well as Max Martin and Shellback, two of blockbuster pop’s biggest hitmakers— they’ve also worked with Britney Spears and Kelly Clarkson.) Meanwhile, female authenticity, Swift’s stock in trade, is having a pop-cultural moment; we fetishize Dunham’s unflinching self-exposure and fawn over Lorde’s anti-glam attitude. Pragmatically, too, Swift has never been further away from her folksy Nashville roots: fame is not new to her, but she’s now living in a Manhattan high-rise, she’s No. 18 on the Forbes Celebrity 100 list. That image of disarming dishevelment is getting harder to maintain, and Taylor Swift’s everygirl armour seems to be showing some chinks. 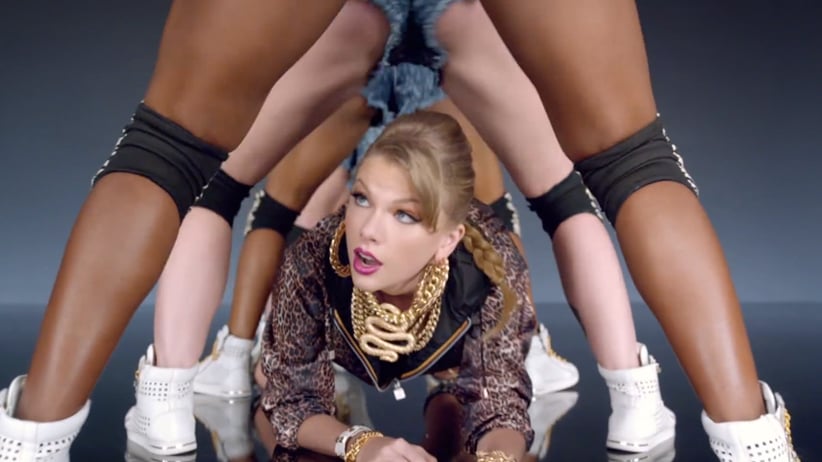 A few weeks before Limogate broke, Swift released Shake It Off, the lead single from 1989, and found herself at the centre of another controversy. In the video, Swift attempts to execute various dance moves, surrounded by a cabal of far slicker dancers. In one segment—ostensibly a send-up of Miley Cyrus’s twerking infamy—she crawls through a line of gyrating derrieres, many of them black and brown. The timing was terrible. One writer noted it came out at the height of racial tensions sparked by events in Ferguson, Mo. Many saw it as disingenuous; music critic Jessica Hopper noted in a discussion on
Wondering Sound that it represented “the reintroduction of the Taylor Swift that’s just like us, just one of the girls, at the most vertiginous height of her fame.”

“I make the moves up as I go,” she sings on Shake It Off, but it takes a concerted effort to create the illusion of spontaneity Swift has mined in her careful fusion of Nashville country and teen pop. “In both those fields, in different ways,” says Toronto critic and pop aficionado Carl Wilson, “realness and authenticity are hugely important: that one-to-one relationship to fans, whether at a country meet-and-greet or via Twitter and Instagram, that sense that the star could be your friend, the sense that she’s singing about her life directly and that her life is really a lot like yours—only with shinier clothes and better hair.”

Swift has made the most of what Wilson describes as her “telling-secrets-at-a-slumber-party” vibe, peppering her liner notes with Easter-egg-like clues to help fans (and culture bloggers) decipher the famous exes (John Mayer, Jake Gyllenhaal) who inspired her more lacerating tunes. This, of course, makes listeners feel part of a charmed circle, privy to her innermost thoughts.

With 1989, Swift has kicked her pseudo-BFF approach into overdrive, joking in interviews about how she “Internet stalked” the social media accounts of some of her most diehard fans. She used this intel, she claims, to hand-pick a select few to participate in the video for Shake It Off. If it feels terribly teenage, well, that’s deliberate, too. “The core of her career will always be her teenhood,” says Hopper. Wilson says Swift’s everygirlness is actually a political stance: “She wants to be a voice of girl empowerment, to say that girls’ experiences are important, to articulate what it’s like subjectively to be a 21st-century normal suburban girl. She’s kinda like a sly feminist YA writer that way.” 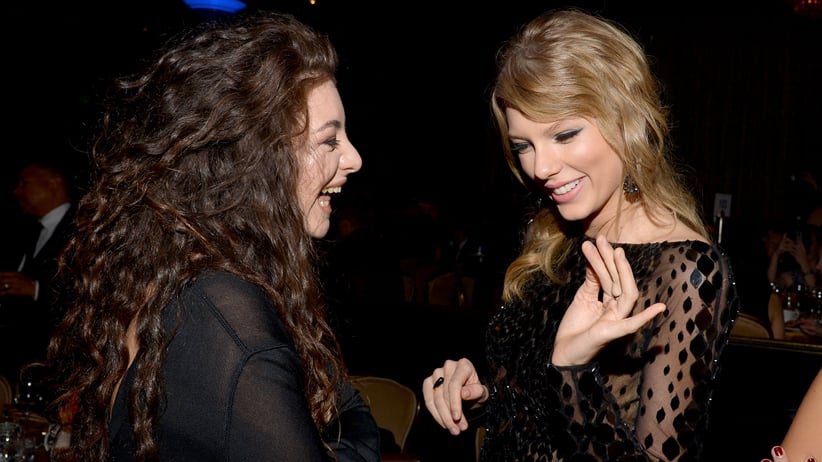 The bigger she gets, the harder it is to front being the girl next door. In a recent Rolling Stone profile, Swift took the writer on a tour of her recently purchased Manhattan apartment, highlighting adorably quirky decorating features. Of one tchotchke, a fish tank filled with vintage baseballs, she says, “I was like, ‘That’s so cool, they’re so old!’ ” Soon after, she bumps into a doorway—“That’s a door that I walk into.” Later, she shows up bearing a tray full of takeout coffee and apologizes for not knowing the writer’s order. Try to imagine Beyoncé bringing a sweating journalist iced coffee. (You can’t.)

In fact, Beyoncé is a good foil here: She and Swift are the two most powerful women in modern pop. But where Beyoncé cultivates an aura of flawlessness, with her meticulously curated public persona and her hermetically sealed vault of personal footage, Swift positions herself as sensitive and easily shaken—perpetually adolescent. As Hopper observed, Swift’s strategy is to stand “in contrast to the power and sexuality of mainstream pop.”

Certainly, one of her go-to songwriting tropes positions her—or her protagonist—as the underdog, fighting back against a world of haters. “She wears short skirts, I wear T-shirts / She’s cheer captain and I’m on the bleachers,” she sang in 2008’s
You Belong With Me. On 2010’s Mean, she lambasted a bully for “calling me out when I’m wounded . . . picking on the weaker man.” Shake It Off tweaks the formula slightly. After listing some of the more uncharitable things people have said about her, Swift sings: “The haters gonna hate, hate, hate, hate, hate / Baby, I’m just gonna shake, shake, shake, shake, shake / I shake it off.” In this case, the persecution narrative didn’t quite gel. One critic described the song as “an extended woo-girl shrug emoji, an oblivious ‘who cares’ with a horn section.”

Her second single—released Oct. 14—returns to more familiar territory. Produced by Antonoff, Out of the Woods is a breakup ballad of a sort; she’s implied it’s about Harry Styles, the floppiest-haired member of One Direction. That frisson of secrecy and disclosure is catnip for fans, who can continue to feel they’re members of a privileged sisterhood.

As it happens, sisterhood is one of Swift’s chief preoccupations at the moment. While she’s always taken pride in her friendships (see 22, which details a girls’ night out with pals like Selena Gomez), the singer is currently enmeshed in a campaign of female solidarity. She name-drops her new BFF Lena Dunham; she invited her other new BFF Lorde to her birthday party last December, where guests were photographed in a corona of red balloons. The connections seem genuine, yet it’s hard not to assume Swift’s fortress of sisterly realness is a strategic move. “When I think of her career,” says Hopper, “I imagine that [
New Yorker story] about people learning how to captain massive, massive boats in this lake, and the impossibility of turning them around. She’s a billion-dollar corporation. It’s hard to imagine every move is not entirely fine-tuned before it comes into our view.”

The reflected glow of these women helps obscure the schism between the real-life Taylor Swift (powerful, knowing, unflappable) and the one she strives to present to the world (hapless, guileless, perpetually flapped). Swift just has to make sure that in surrounding herself with a cadre of women who may be even more skilled at channelling don’t-care authenticity, she doesn’t risk undermining her own performance.