Why Catholic priests should be allowed to marry

Michael Coren: There's no compelling biblical reason why priests have to be celibate. Ordaining married men today would do nothing but good. 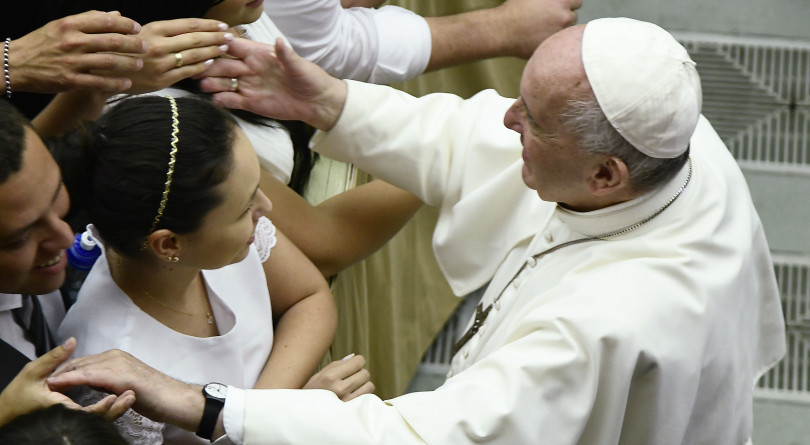 Pope Francis blesses a newly married couple during his weekly general audience at the Vatican on Aug. 21, 2019 (FILIPPO MONTEFORTE/AFP via Getty Images)

In a decision that has disappointed and delighted in roughly equal measures, Pope Francis ruled that married men still cannot be ordained as Roman Catholic priests.

The background to this is that there is a shortage of clergy, particularly in certain parts of the world, and especially in the Amazon region. Last year, a synod or conference of 184 bishops meeting at the Vatican argued that married men, preferably older, should be ordained where there was a pressing need. Priests are vital in the Catholic Church, because beyond their pastoral and missionary work, they are also the only people qualified to consecrate the host, the sacrament that is considered to be the body and blood of Jesus and at the epicenter of church worship. Because of this, 85 per cent of Amazonian villages are unable to celebrate Mass.

The synod proposal was condemned by more conservative voices as a first step to allowing widespread acceptance of married clergy—perish the thought!—and a “slippery slope” to God knows what.

Progressives and realists were more optimistic, but the recommendation had to receive Papal confirmation if it were to proceed. It wasn’t to be, and in the same statement of rejection, Francis also said no to female deacons. The deaconate is either transitional (a half-way house before ordination to the full priesthood) or permanent (where men fulfill some though not all of a priest’s duties but are not seeking entry into priesthood). There are married deacons, but they have to be men.

So it’s business as usual, from a pontiff who is splendid on many issues but still robustly conservative on others. Thing is, there is no compelling theological or biblical reason why priests have to be celibate, and the Roman Catholic Church didn’t always demand it.

In earlier times the single life was necessary for monks, but not priests. Even when celibacy was commanded, it was not always enforced. Today, the small numbers of married Anglican clergy who convert to Rome are accepted, and there are entire Catholic rites—Ukrainian for example—where marriage is encouraged and children abound. Chosen celibacy is generally respected in non-Catholic churches but it’s the insistence that is problematic for so many people.

The Catholic Church argues that celibacy enables priests to devote their entire lives to their flock, to be able to move to another parish or town at a moment’s notice, to stand with the poor and marginalized, and to live a daily sacrifice. For some clergy this is likely true. Enforced celibacy also, however, gives the church total control over their clergy, means that priests can be paid less, and allows the church to own their homes.

There’s more. Even if this were not an intended consequence, an all-male and ostensibly celibate clergy has created a class of cleric totally separate from those to whom they minister. It has established an elite of the different, removed women from any semblance of influence, and led to sexuality and sex being seen as something distant or even unholy.

The other reality is that a large number of Catholic clergy are gay, with Father Donald Cozzens in his book, The Changing Face of the Priesthood, arguing perhaps as high as 58 per cent. Many are celibate, some not. A number of the finest priests I have met—Catholic and Anglican—have been gay, and their sexuality shouldn’t be relevant. The truth, however, is that the priesthood has traditionally attracted gay men because in a homophobic society it was one of the few places where they could hide. Rome is well aware of this, and terrified that if marriage were permitted, people would then ask why so few clergy were taking advantage of their new freedom.

Enforced celibacy, and the obfuscation and fear that occurs when it’s broken, also produces a culture of denial, allowing sinister forces to hide under that sordid cloak. This is part of the reason why the sexual abuse scandal was so widespread in the Catholic Church and took so long to expose. While abuse is tragically inevitable in any institution where there is a power dynamic, I’m convinced that if married men, women and family life was at the heart of the priesthood, it could never have been so prolonged and common.

Ordaining older, married men in a remote region would have done nothing but good, but at heart this wasn’t about the Amazon at all. It was Rome refusing to allow the door to be opened just a crack, because once that happened it would have been obvious that enforced celibacy was a digression, sometimes a dangerous one, and that other changes such as female priests, a more democratic church, and less central dominance were necessary and beneficial. Change will come, but not unfortunately with this Papacy.