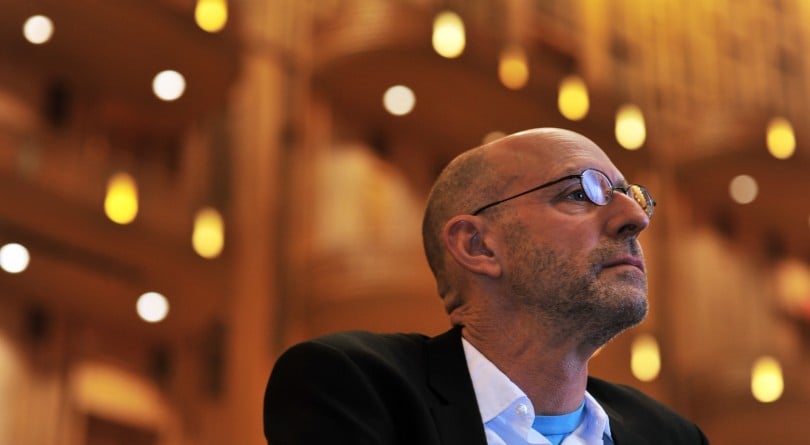 Michael Pollan talks about his new "Food Rules" book at the Strathmore before his presentation there on October 26, 2011, in Rockville, MD. (Photo by Jahi Chikwendiu/The Washington Post via Getty Images)

Michael Pollan is best known, as Alec Baldwin has put it, as a writer who has “reshaped our relationship to what’s on our dinner plate,” with food classics including The Omnivore’s Dilemma and In Defence of Food. But in his new book, How to Change Your Mind: What the New Science of Psychedelics Teaches Us About Consciousness, Dying, Addiction, Depression, and Transcendence, Pollan switches to psychedelics. Hallucinogenic drugs “have enormous potential at the level of healing mental illness, which is a huge crisis worldwide,” Pollan told Maclean’s. “We haven’t proven it yet, but the promise is there and it needs to be explored as fully as we can.” Over Skype from his comfortingly book-lined Berkeley home study, Pollan spoke about mind-altering drugs and how, during the course of his research, he decided he should try LSD, psilocybin and 5-MeO-DMT, otherwise known as toad.

Q: When and why did you decide to personally try psychedelics?

A: I was interviewing people—dozens of people—before I tried any of these experiences. Their stories were so incredible and seemingly so implausible, these radical transformations in people’s lives, these powerful spiritual experiences, people reporting that this second or third most significant or meaningful experience in their whole lives had been occasioned by a molecule—my curiosity got the better of me. We have very deep mental grooves, and the idea that there was an experience that could help you jump out of them was very attractive. But there’s a psychic risk. These are powerful drugs, and some people get into trouble with them, and we shouldn’t overlook that. They can surface very disturbing memories. Childhood trauma often comes up in these experiences. So you do risk psychic pain of various kinds, and the equanimity of your life as you live it.

Q: What impact do you hope How to Change Your Mind has?

A: This book is ostensibly about psychedelics, but it’s really about the mind. By disrupting normal consciousness, you can understand it better. Psychedelics are a tool for doing that. One of the big takeaways for me is how little we understand about this territory between our ears, and how much more complicated it is than we imagine, and that it is capable of generating the kind of imagery and the kind of emotion and the kind of experience that happen on psychedelics—these are not the results of the molecules. This is all in you, these are your experiences. So it gave me a healthy appreciation of how vast this territory is, and how unexplored so far. I’m hoping that the book makes it easier for researchers to continue doing this work. Research is expensive, and it’s not supported by governments yet. Depression is the leading cause of disability worldwide, according to the WHO. Suicide rates are up, addiction is rampant, and here is a potential tool that could help with all that that we need to explore. You can get distracted by the psychedelia, but really the target of inquiry is the mind. And what an amazing subject that is.

Q: You once described yourself as “spiritually retarded.” Did How to Change Your Mind make you more spiritual?

A: Yeah, it has. I had had powerful experiences, the birth of my son was one of those. But as I understood it, spiritual experience, something that makes you question the world as it presents itself to your senses and makes you think maybe there’s a beyond or something that defies the laws of nature—that I’ve never had. I did have what I now think of as powerful spiritual experiences on psychedelics. I now understand spiritual experience as an experience of a profound connection that happens when your ego dissolves, and the usual borders between you and, whether it’s nature or other people or the universe disappear, and you feel this sense of oneness emerging.

Q: I found your exploration of the ego, on and off psychedelics, interesting: a riff on the reaction to your earlier work, where people hailed you as this food superego.

A: [Laughs]I haven’t made that connection before. I was never comfortable being people’s food superego. My goal with food and people’s habits was just encouraging people to be conscious of what they were eating, rather than narrowly dictating what they should eat. I didn’t really care if you came out of reading my book as a vegan or a vegetarian or a carnivore or a flexitarian, I just cared that you had thought about it. Psychedelics are not for everybody. I’ve read books on mountain climbing, and I don’t even think about climbing Everest. You can learn a lot through vicarious experience. And I hope people feel like that about this book: you don’t have to follow in my footsteps to get some value from my experience.

Q: What might surprise readers about How to Change Your Mind?

A: So many surprises; historical, scientific. Every turn had a surprise for me in writing this book, and that was what was so exciting about the process. Bill W., the founder of Alcoholics Anonymous, got sober on a psychedelic experience and tried to introduce LSD to AA in the’ 50s.

A: When I say sugar is like crack, I don’t mean to say that it’s a drug—although there is some evidence to that fact. But something happens when you refine these complex molecules. When you take a food that has sugar in it, and you remove the sugar, and then you remove everything except that molecule of sucrose, you are intensifying it in a way that you would never find it in nature. And that sort of concentration of calories—without any fat, without any fibre—is really what gets you into trouble. There are many people who use coca leaf without any health effects in South America. They can routinely have a coca tea, or chew on the leaves. It’s not a problem until you refine it and turn it into a white powder [cocaine], and then you have something that’s too powerful for the body, such that it damages the body and leads to addiction.

Q: You write about celebrities’ LSD therapy experiences. Is there much on the record about Stanley Kubrick’s sessions?

A: It’s not surprising, when you look at his body of work. I haven’t read any good accounts. The longest—or the most extensive—account we have is about Cary Grant, because he gave some interviews about these LSD experiments in the late ’50s. He had more than 60 LSD sessions in LA and claimed that they changed him, and that they had allowed him to transcend his ego, which made him irresistible to women, he said. It doesn’t sound like he completely transcended his ego [laughs]. One of the ironies of these drugs is that they do dissolve the ego, but sometimes in its wake these egomaniacs emerge; Timothy Leary was another one. It was pretty routine in Hollywood in the ’50s. There were a lot of people getting treated with what was essentially a low-dose LSD experience, what was called a “psycholitic” dose, a “mind–loosening” dose. And basically therapists thought it was a very good way to get people to loosen up. For many people, it was apparently quite helpful.

Q: In How to Change Your Mind‘s conclusion, you quote Scottish psychiatrist R. D. Laing’s point that there are three things human beings are afraid of.

A: Death, for sure, and the contents of my own mind. Definitely. I went into this research with a fear that I would discover that I was crazier than I cared to think, and that madness wasn’t as far away as I hoped. That was a real fear, and one of the satisfactions of the experience [of taking psychedelics for the book] was, having had these intense trips, I emerged a little sturdier than I expected to. Although one of my guides said, any trip could be different; there could still be demons lurking.

Q: Are you less afraid of death now?

A: Yeah, somewhat less afraid. I had about six [psychedelic] experiences or so [for the book], and every single one of them was preceded by a sleepless night. I can surrender in the experience better than I did at the beginning, but my ego is still very powerful and doesn’t want me to do this.

Q: In the Sixties and Seventies, Timothy Leary’s wild glee could be counterproductive to the cause?

A: I have scepticisms, still. I haven’t completely drunk the Kool-Aid, I guess. I think that’s important. I entered this [psychedelics] world from another world, and I got pretty involved in it, but I’m not of it. I’m kind of a surrogate for the curious and naïve—hallucinogen-naive, as researchers refer to the people who haven’t tried them before. I was new to it, so I approached it with a kind of trepidation and sense of wonder that Timothy Leary may have had at the beginning but lost at some point.

Q: The opioid crisis has made some of my colleagues, who were pro-hard drug legalization, anti- or at least unsure because of Big Pharma’s excessive pushing. You are a conscientious critic of food-related bad behaviour by the Big Ag and Big Food likes of Monsanto and Tyson Foods. Are you concerned about what corporations might do with legal psychedelics?

A: Yeah. Corporations sell us lots of drugs we don’t need, and do it sometimes in deceptive ways. The story of opioid addiction, specifically the company Purdue Pharma, which aggressively sold OxyContin to people on the argument that it was not addictive—which was patently untrue—suggests that it’s something to be concerned with. So far, most of the psychedelic people who have been advancing the agenda have been non–profits. But there is a company now getting into this space, and there will probably be others. You bring up opiates. I think it’s really important that we not lump all illicit drugs together—or licit drugs together. We live in a culture that’s saturated with drugs, both licit and illicit. Most of the population uses a psychoactive drug of some kind, whether it’s alcohol or nicotine or caffeine, or prescribed drugs like Adderall and the other amphetamines for ADHD, or tranquilizers. So you have this spectrum of drug use. We have this dividing line between legal and illegal, but the opioid crisis tells us that’s really not the key line. We have many people who got addicted on prescription drugs. And there’s this moral conundrum over all of it that makes it very hard to have a rational discussion. So you have to look at each drug on its own, and look at its merits as a tool, and at its demerits, whatever toll it takes on your body.

It’s important to understand that psychedelics have a very low toxicity; there doesn’t appear to be a lethal dose. There are lethal doses for Tylenol; many over–the–counter drugs have lethal doses. And they’re not addictive, they’re not habit–forming. If you give them to the rat in the cage with the lever, the classic drug experiment, they will press that lever once with LSD and then they’ll never press it again. It’s not to say they’re not without risks—all drugs have risks. They’re psychological, in this case, and people do have bad experiences.

This conversation has been edited and condensed for length and clarity.