What was Loblaws thinking? Bread is no mere food product. It's a part of human history, religion and culture; it is the staff of life. 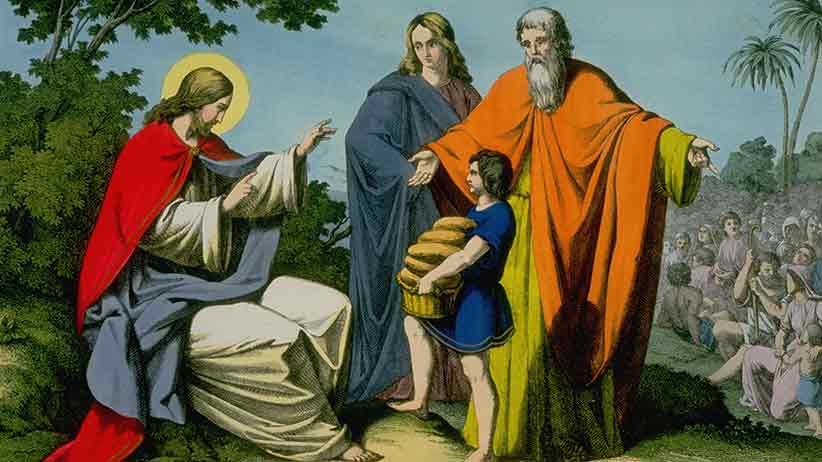 Jesus Christ and the miracle of the loaves and fishes (John 6: 1-13), from COTTAGE PICTURES FROM THE NEW TESTAMENT, 1856. (Photo by Time Life Pictures/Mansell/The LIFE Picture Collection/Getty Images)

There’s price fixing and then there’s price fixing. The practice, artificially inflating costs for unsuspecting consumers, is never going to be popular. But the details surely matter: stealing candy from a baby isn’t merely easier than taking it from a grown-up, it’s more reprehensible.

Given how most of us enjoy the sight of rich people being conned, a retailer that restricted its machinations to luxury items—truffles, say, or rare vintage wines—might escape a peasant uprising. But bread? Ah, no, not bread, do not cheat with what Scripture calls the staff of life.

Bread may not be what it used to be in the agrarian societies of Western Asia and Europe: the food that provided, in Jesus’ own words, the totality of human sustenance, physical (give us this day our daily bread) and spiritual (take this [bread] and eat it, for this is my body). It’s not even what it was only a century ago, when a quarter of the calories consumed by relatively (by world standards) well-off working-class Europeans still came from bread—meaning, should there be any doubt, that the symbolism derived from the reality.

Roman emperors, ever worried about being toppled by urban riots, were true believers in bread’s significance, keeping a close eye on the bread (sustenance) and circus (entertainment) demands of the eternal city’s plebeians. In Ottoman Turkey and Egypt, bakers—every pre-modern state’s favourite scapegoats in times of grain scarcity—could be nailed through the ear to their shop doors if caught selling underweight loaves. Penalties in medieval England weren’t as draconian, but the baker’s dozen is thought to have originated in bakers’ fear their loaves might be found underweight—adding a free 13th loaf to an order of 12 took care of their legal jeopardy.

READ MORE: Loblaw’s price-fixing may have cost you at least $400

Wary rulers paid attention to bread for centuries. Napoleon’s correspondence, even when he was campaigning far from France, shows a preoccupation with Parisians’ bread prices and supplies. Russia’s Romanov dynasty, whose death blow came from bread riots fanned by Bolsheviks chanting their “Peace, Bread, Land” slogan, would have been well-advised to pay closer attention to the bread situation. And, whether it was uttered by Marie Antoinette or invented by her enemies, has there ever been a more fateful or fatal one-percenter’s insult than “Let them eat cake?”

But we are richer now, and literally live higher off the hog, while troubled by thoughts of gluten and carbohydrates. (Our contemporary political masters, at least of the Trumpian sort, are thereby more concerned with providing a steady supply of circuses rather than humdrum food.) Yet if bread’s iconic luster has dimmed, it’s far from extinguished. Millennia of agriculture have sunk it and the crops from which it is made deeply into our cultural DNA. Pat-a-cake, pat-a-cake, baker’s man: bread is still something special.

Long before the time of Christ, wheat-based cultures had already associated the cycle of the farming year—spring rebirth, summer growth, fall harvest, winter death—with the cycle of human existence and the hope of immortality. Goddesses of agriculture were goddesses of human fertility as well. It’s no accident that semen in English was once “seed,” or that Death personified—the Grim Reaper himself—bears the scythe he uses to cut down wheat stalk and human alike. Or, for that matter, that the French word for oven, four, is derived from Latin fornix, which—despite meaning “vault”—also gave rise to English “fornication.” In ancient Rome, prostitutes met with their clients in vaulted rooms that resembled large ovens. But that’s not the only resonant thread historically linking ovens and women’s bodies: pregnancy is often described as a bun in the oven.

The practical side of bread’s importance continues to resonate too, in language and emotion. Bread-winners have to ensure they have enough dough for the food they need to break bread—one of the most soul-satisfying phrases in the English language—with family and friends.

That’s a burden not made lighter by greedy grocers who have spent 14 years overcharging for the staff of life. The first attempt at apology and recompense, Loblaws’ $25 gift card, has so far managed to anger far more Canadians than it’s assuaged. The Prophet Hosea, whose words are among the most famous wheat metaphors in the Bible, has it exactly right: the country’s largest grocery chain has sown the wind, and now must reap the whirlwind.