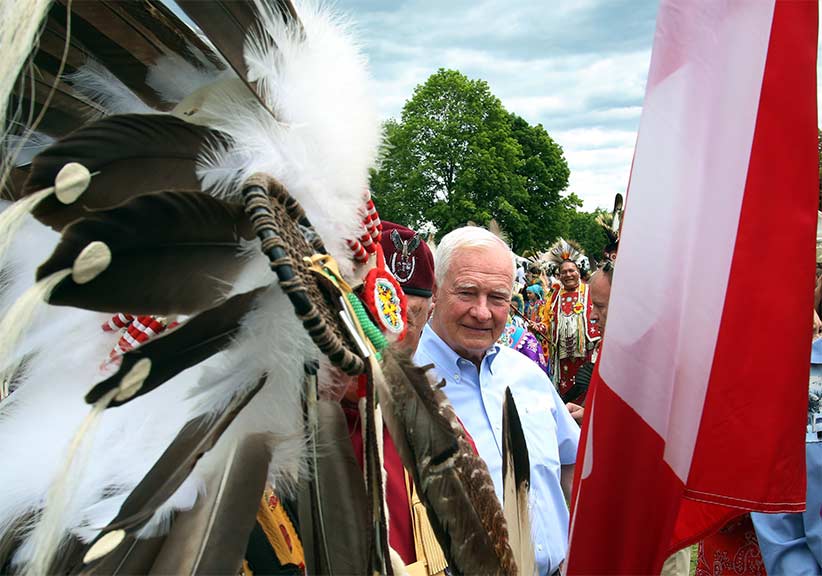 While David Johnston prepared to join the Queen for her birthday celebrations in London earlier this month, fourteen chiefs (some on horseback) joined 500 protestors outside the gates to Rideau Hall. The chiefs demanded a meeting with the Queen, or her representative, so they could personally deliver an engraved staff and a set of recommendations to improve the relationship between Indigenous and non-Indigenous Peoples.

“[The Queen] has to take responsibility for the Native people,” explained Grand Chief Guillaume Carle. “Our rights are protected by the Queen and not the government of Canada.”

Most Canadians don’t realize that for Indigenous Peoples, Canada’s place in its Treaty relationships is not fulfilled by the government of the day, but rather by the Crown—specifically the Queen. Canadians have a vague understanding of the Crown in Canada and its place at the very heart of our democracy. Indeed, trying to understand the delicate bonds holding this Confederation together is impossible without encountering its constitutional monarchy. However, what people need to realize is that the relationship between the Sovereign and Indigenous Peoples is at the heart of any Treaty. Remove the Crown from Confederation and the whole family could come apart—delete the Sovereign from Treaties and Canada’s very existence becomes impossible.

MORE: The Crown is everywhere. So why don’t we understand it?

Far more than simply contracts, Treaties tied Indigenous Peoples and the Sovereign together as members of a family, bound in love so that they could meet the many challenges that their radically different worldviews would face.

Despite efforts by the likes of Sir John A. Macdonald, the personal relationships between the monarch and Indigenous Peoples were not fully extinguished following Confederation, providing Canadians with a way to rekindle their Treaty relationships. Enshrined by the Constitution Act of 1982, Treaties remain the nucleus of Canada’s modern relationship with Indigenous Nations; this includes their explicit references to bonds with the Sovereign. In his recent collection of letters The Idea of Canada, Governor General David Johnston reflects in “What’s a Monarchy For?”: “[The Crown] can assert itself as strong and unique in the emerging theatre of North America, and it [can] be flexible enough to meet the varied needs of its citizens—original inhabitants and immigrants alike—as those needs evolved.” We are witnessing such an evolution today.

As Canada’s oldest institution, the monarchy continues to embrace the Queen’s personal relationships with First Nations. Looking at one such relationship, in 2010 the Queen herself gifted two sets of silver hand bells to the Haudenosaunee Peoples to acknowledge the 300th anniversary of the Silver Covenant Chain of Friendship established with Queen Anne.  These gifts were destined for the only two Chapels Royal (clergy that serve the spiritual needs of the Sovereign) outside of the United Kingdom—both situated in Haudenosaunee territory.

Canada’s vice regal team have also been involved in fostering reconciliation. It was British Columbia’s lieutenant governor, the Hon. Iona Campagnolo, that first visited a residential school site (St. Michaels) when she participated in a cleansing ceremony at Alert Bay in 2003 (This National Aboriginal Day Ontario’s Lieutenant Governor Elizabeth Dowdeswell will host a visit to Brantford’s Mohawk Institute, the country’s first residential school, that will include the governor general and members of the Princes’ Charities Canada). Michaëlle Jean, in her role as governor general, was the first to witness survivor accounts of the Truth and Reconciliation Commission. David Johnston was one of the last.

More can be done. Without official direction from their governments, or a comprehensive policy articulating the role of the Sovereign as Treaty partner, efforts by the Queen’s representatives to engage with First Nations depend on the personal interest of the incumbents (often times resetting with each new officeholder). Vice regal relationships with Indigenous Peoples run the risk of being piecemeal and inconsistent from province to province.

“The Treaty roles of the governor general and lieutenant governors in relation to Indigenous Peoples is the single greatest area of consternation,” explains Rick Hill (Senior Project Coordinator with the Six Nations Polytechnic Indigenous Knowledge Centre near Brantford). He goes on to add “It highlights an identity crisis concerning the role of the Crown.”

Maintaining the historic and personal relationships between Her Majesty and Indigenous Peoples must become one of the official and publicized duties of the representatives of the Crown in Canada, and should be promoted as a key and contemporary responsibility as important as their duty to ensure there is always a prime minister or premier in place.

Remarking on a wampum belt presented to him in 2012, and currently displayed at Rideau Hall, David Johnston once remarked, “[It’s] a reminder of the covenant that binds us [Indigenous Peoples and Canadians] and of my responsibilities as a representative of the Crown.”  Such a statement needs to be properly defined and implemented for every vice regal office. The role of the representative of the Queen with respect to Indigenous Peoples can no longer depend on the goodwill of a particular governor general or lieutenant governor. Rather, the personal relationship must become entrenched in our democracy, including the language we use to describe it.

The Queen, on behalf of Canadians, is bound in Treaties across the land, cementing familial relationships with First Nations. Families have the ability to survive seemingly insurmountable trauma, but they can only do so together. If Canada is truly committed to reconciling a nation-to-nation relationship, then the Crown that allowed this country to germinate in these lands needs to be understood and embraced so we can restore ourselves as Treaty people.

Nathan Tidridge has written several books on the Crown’s relations with Indigenous peoples, including his most recent, The Queen at the Council Fire. A teacher of Canadian history and government, Nathan was appointed to the Ontario Heritage Trust Board of Directors and the Prince’s Charities Canada Advisory Council in 2015. Follow Nathan on twitter (@tidridge), or visit his website www.canadiancrown.com.