Why Kate insists on going nude: a shoe story - Macleans.ca 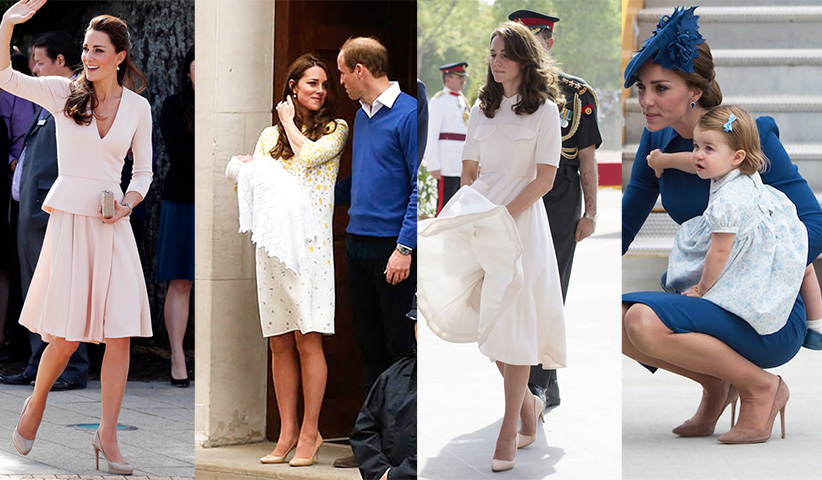 The clothes of the royal duchess may be analyzed down to the style of button, but one accessory is never overlooked: her shoes. In particular, her nude shoes. For Kate, duchess of Cambridge, wears a lot of nude/beige/stone-coloured shoes. Sometimes it seems like that’s the only colour of footwear in her closet (though she does change it up to black and even red every now and again). When she arrived in Canada, there was a pair of “praline” Gianvito Rossi shoes.

“People have prayer circles that she won’t wear the [nude] shoes again,” says Susan Kelley of the authoritative What Kate Wore website. In the early years, the pair of shoes was frequently the Sledge platforms from L.K. Bennett. Kate wore them constantly during her 2011 tour of Canada. Hit any big shoe store and a version of those shoes is on the rack. (In fairness, she does switch it up every now and again with black and even red options; in Vancouver she wore red pumps from Russell & Bromley.)

However, in the past few years, as styles have changed, they’ve been conspicuously missing from Kate’s feet as she transitioned to traditional classic pumps. But that didn’t end her love affair with all things nude. She just scooped up non-platform beige options from her favourite shoe designers including Gianvito Rossi,  L.K. Bennett (Fern and Harper styles) and Jimmy Choo.

Their sameness can present problems for those who keep track of her fashions. Before Jane Barr created the encyclopedic Kate’s Clothes site, she admits, “I never would have known the difference between one pair of beige shoes and another.” Like other royal fashion experts, she’s become an expert by default, spending hours analyzing the shape of the toes, heels and designs to spot the minute differences between Kate’s nude shoes. (For an example of the time it takes to ID her shoes, check out yesterday’s post on What Kate Wore. Bloggers spent hours scouring websites and sending off messages before finally getting confirmation that Kate’s red shoes were from Russell & Bromley.)

Often when she’s adding an outfit to her growing database, Barr forgets to include the shoes. Then come the queries. “Oh, right,” she thinks, zooming in on high-resolution photographs to figure out which option is worn.

In a way, Kate’s affection for nude shoes is an homage to the classic style of Queen Elizabeth II. For decades, the Queen has worn the accessories: versions of a two-inch block heeled pump, with a patent Launer bag slung over her arm.

“I get the utilitarian,” What Kate Wore‘s Kelley says, “It’s easy, not as many decisions.”  For royal women under a permanent fashion spotlight, going with safe and familiar choices is clearly a winning strategy.